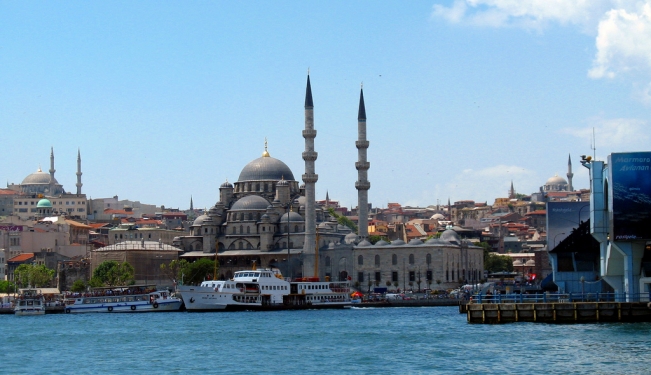 Strategically placed between Europe and Asia, Turkey is a young, vibrant democracy and a rising regional power. It enjoys a bustling economy and has been ruled by an ambitious, mildly Islamist government since 2002.

Modern Turkey was founded in 1923 as a secular republic by the charismatic Ottoman general Mustafa Kemal Atatürk. Decades of single party rule followed, but the system gradually began to open to wider democratic participation in the 1950s. The army acted as the vanguard of Mustafa Kemal’s secular ideas, vigilantly maintaining the status quo through political intervention and, when things got out of hand, the occasional coup d’état.

The Islamic-leaning AK party was the first to break through the army’s Kemalist line in the 2002 elections. Led by the tough-talking Recep Tayyip Erdoğan, the party ran on a platform sympathetic to EU reform but appealed to conservative religious values. Since then, the traditionally secular elite based in the western regions of the country are giving way to a new class of conservative entrepreneurs based in inner Anatolia.

Ankara was a staunch U.S. ally during the Cold War and saw accession into the European Union as its main objective, while its relations with Arab and central Asian neighbors were cool at best. A popular slogan taught to schoolchildren in those days was: “Anatolia, surrounded by water on three sides and enemies on all four.

This has changed under the AK government, which seems determined to become a regional power in its own right. Under foreign minister Ahmet Davutoğlu’s “zero-problem with neighbors” policy, Turkey has re-engaged the Middle East with friendly rhetoric and ambitious business deals, differing Western approaches in method if not in its end goals. The Turkish-Brazilian treaty to solve the Iranian nuclear issue serves as one among many other examples.

Turkey’s worsening spat with Israel is perhaps the most controversial aspect in its foreign policy shift. Mr. Erdoğan maintained cordial relations with the Jewish state until the 2009 Gaza war, for which he publicly denounced Israeli president Peres in a Davos summit forum. The low point  between the two countries came a year later, when Israeli commandos descended on a Turkish-led flotilla which was attempting to run through the Gaza blockade. With nine Turks killed in  action, Turkey promptly rebuked its ambassador to Tel Aviv. In the absence of a formal apology and reparations to the families of the slain, the rift between the two countries is widening.

Accession to the European Union (EU) remains a cherished goal despite the EU suffering from severe stagnation. The EU began accession talks with Turkey in 2004, which encouraged substantial reforms, such as a new penalty code, abolition of the death penalty and greater protection for minority rights. The enthusiasm of these early years has waned as the integration process has ground to a near halt. In particular, by opposing Turkey’s membership to the EU, France and Germany have hurt Turkish pride and, now, the majority of Turks oppose becoming part of the EU.

Turkey is the largest economy in the region. While agriculture still makes up 30 percent of its economy, its industrial output is growing fast and Turkey is exporting to cash-strapped markets in Russia and the Middle East. Turkey’s main export partners are still in Europe however, which also supplies a steady stream of tourists to the country’s hot beaches and cultural riches.

Turkey’s economy was traditionally controlled by an elite centered around Istanbul and other large westernized cities. This began to change when former prime minister (and later president) Turgut Özal encouraged medium-sized Anatolian businesses with free-market policies in the 1980s. Now called “Anatolian Tigers,” these businesses challenge the industrial class of Istanbul and push toward new frontiers in Asia and Africa.

Kurds and the PKK

Unlike the pluralistic Ottoman Empire, modern Turkey is starkly nationalistic. Population exchanges with Greece and the immigration of its skilled Christian, most notably Armenian, and Jewish population populations has rendered the country 99% Muslim and overwhelmingly Turkish. The Kurdish population based in the south eastern regions of the country comprises the largest minority and speaks Kurdish.

Kurds have long fought for independence or semi-independence from Ankara. Their political parties have been banned repeatedly over the decades, the current one being the Barış ve Demokrasi Partisi (Peace and Democracy Party, BDP).

The militant arm of the struggle is the Kurdistan Workers Party (PKK,) which has been waging an armed struggle against the Ankara government since the mid 1980s. The ongoing civil war has wiped out countless villages and is said to have cost at least 30,000 lives.

Turkey: A Bridge between East and West?