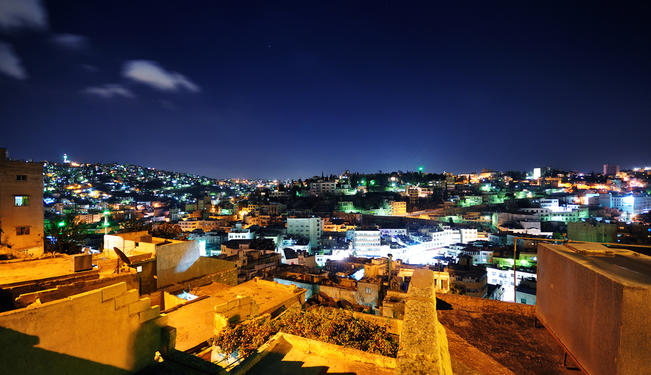 The ongoing conflict in Syria is impacting the Hashemite Kingdom of Jordan in numerous ways. Jordan tends to present an image of political stability and social cohesiveness in an otherwise turbulent region.

In reality, the situation inside Jordan is far more complex. In many respects, Jordan’s alliance with the United States conceals a climate of political fragility, communal strains, and economic weakness. Led by King Abdullah II ibn al-Hussein, Jordan is ruled by an authoritarian regime that presides over an increasingly agitated populace eager for political reform.

The ruling monarchy has watched nervously as Arabs have taken to the streets to demand the freedom, democracy, and justice that have eluded them for so long – demands that are being vocalized by more and more Jordanians from all walks of life – while its erstwhile allies in countries such as Tunisia and Egypt were toppled by unprecedented displays of people power.

Jordan is now being confronted with severe social, political, economic, and security challenges as a result of the ongoing tragedy in neighboring Syria. Consequently, the eruption of political unrest in Syria, followed by the ensuing militarization of the Syrian uprising that has plunged the country into a civil war, presages a period of extended uncertainty in Jordan.

In tangible terms, the crisis in Syria has presented Jordan with a major economic burden to its already weak economy. Jordan also faces a series of threats to domestic peace and stability stemming from the potential spillover of fighting into its territory.

The dominant role being played by radical Islamist militants in the Syrian insurgency, and the notable increase of Jordanian militants fighting among the opposition, raises concerns about the potential for blowback within Jordan down the line. The rise of groups such as Jabhat al-Nusrah (The Support Front) and the Islamic State of Iraq and the Levant (ISIL), among others, which have come at the expense of Free Syrian Army- (FSA) affiliated movements, is a case in point.

Importantly, Jordan is located adjacent to Syria’s southwestern province of Dera'a, a locus of political and violent opposition to the ruling Ba’athist regime that is widely seen as the cradle of the Syrian uprising.

Since the start of the armed uprising, violent insurgents, including radical Islamist militants, have been accused of using Jordanian territory just over the Syrian-Jordanian border to organize and launch operations inside Syria.

Inconsistent Message on the Syrian Conflict

Jordan was also quickly ensnared in the conflict on the diplomatic stage. Throughout the duration of the conflict, Jordan has conveyed a confused and inconsistent message about its position. For example, Jordan has sought to portray itself as a neutral actor in the events in Syria, despite its history of acrimony with the Ba’athist regime. Officially, Jordan advocates a peaceful resolution to the conflict.

While King Abdullah II was the first Arab leader to call on President Bashar al-Assad to relinquish power, he later offered to mediate talks between the Ba’athist regime and the rebels.  And during the anticipated US military strike on Syria during summer 2013, King Abdullah II announced that Jordan would not be used as a staging ground for US action.

At the same time, Jordan has lent its support to political opposition bodies such as the Syrian National Coalition (SNC) that are themselves attached to numerous insurgent detachments. Jordan is also reported to be serving as a conduit for arms and other logistical supplies being provided to insurgents over the border by way of Saudi Arabia and other prominent backers of the opposition.

From Syria’s perspective, Jordan’s close ties with fellow monarchy Saudi Arabia, a leading force behind the political and armed opposition in Syria and a vocal advocate for foreign military intervention to topple the Ba’athist regime, places the Hashemite regime firmly on the side of the opposition.

Reports that American and other foreign intelligence services have also provided various levels of training and other support to insurgent groups in Jordan further complicate the Hashemite Kingdom’s position, especially its claim to neutrality.

A series of major battles between Syrian security forces and insurgents along the Syrian-Jordanian border since the start of the armed uprising places the region into its proper strategic perspective and sheds important light on Jordan’s vulnerabilities. Syrian security forces continue to make notable gains against the armed opposition in parts of northern and eastern Syria near the country's borders with Turkey and Iraq, respectively, as well as along the Syrian-Lebanese frontier in western Syria.

Dera'a province, and other areas in southern Syria that extend to the Syrian-Jordanian border and that have since fallen under the control of the armed opposition, will most likely draw the attention of Syrian security forces in the weeks and months to come. By virtue of its geography, the disposition of Dera'a province greatly affects the security of Damascus and, by extension, the survivability of the Ba’athist regime. Given its proximity to Dera'a province and other critical areas in southern Syria and its role in facilitating – directly and indirectly – the armed insurrection, Syrian efforts to retain control of the critical southern front will likely be calibrated to shape Jordan’s behavior toward the conflict.

The Influx of Refugees

The influx of Syrian refugees has also contributed to a heightening of social tensions in Jordan. Jordan continues to contend with a significant population of Iraqi refugees who fled the conflict in their homeland and the longtime presence of Palestinian refugees.

The presence of large numbers of refugees in Jordan exacerbates longstanding social tensions that threaten to undermine already precarious interpretations of Jordanian national identity. While Palestinians make up the majority of Jordan’s population, the Hashemite monarchy has tended to derive much of its support and legitimacy from the local Bedouin (who are often referred to as "East Bankers") population. The influx of Iraqis also threatened Jordan’s delicate balance of social and cultural identities. With the exception of Lebanon, Jordan hosts more Syrian refugees than any other country.

According to the United Nations High Commissioner on Refugees (UNHCR), over 550,000 Syrian refugees have streamed into Jordan since March 2011. Jordanian officials place the figure above 1 million, as not all refugees have registered with the UNHCR.

The majority of Syrian refugees in Jordan live near Jordanian-Syrian border in northern Jordan. In addition, 70% of the UNHCR-registered refugees are situated in the Aljun, Balqa, Irbid, Jarash, Mafraq, and Zarqa Governorates of northern Jordan.

Approximately one-quarter of all Syrian refugees reside in the tent city of Zaatari, located eight miles south of the Syrian-Jordanian border. Since July 2012, Zaatari has been transformed from a barren desert village with a population of 12,000, into a three-square-mile tent city where over 140,000 Syrian refugees are estimated to dwell. Around 21,000 Syrian refugees in Zaatari are below the age of five. To date, Zaatari is Jordan’s fourth-largest population center and the world’s second largest refugee camp.

The influx of Syrian refugees into Jordan, with a population of fewer than 6.5 million, exerts significant pressure on the economy and exacerbates the resource-poor country’s energy challenges. The cost of operating services at Zaatari alone approaches $500,000 per day, and the daily water demand is 1.1 million gallons.

Amman underscored its priorities during the beginning of June 2013 by ordering its military to seal off its border with Syria to stanch the flow of refugees. Jordan’s sluggish economy, energy shortages, and water crisis will compel Amman to make difficult decisions with respect to resource allocation in the coming years, if the refugee crisis causes Jordan’s population to continually grow at a rate which the economy cannot sustain.

So far, the Syrian crisis has led to an 8% increase in Jordan’s population since March 2011. Relatedly, competition over disappearing jobs has increased as Jordanian employers tap into the large pool of Syrian labor that is willing to work for lower wages.

Moreover, with a growing number of Syrian refugees migrating to the cities, the rental housing market has tightened, particularly in Amman and Mafraq. According to some estimates, rental rates for the cheapest apartments have increased upwards of 50-100% as more refugees move into basements and storage areas within apartments.

The Syrian crisis has underscored deep political and ideological rifts within Jordan, as different factions maintain diverse stances toward Amman’s role in the conflict. Such divisions were highlighted in August 2013, when hundreds of liberal and Arab nationalist groups held demonstrations in Amman to protest an anticipated US military strike against Syria.

These political currents are inclined to view any Western military strike against Damascus within the context of imperialist efforts to undermine the Arab world and destroy Islam. In April 2013, demonstrators in Amman protested against the deployment of 200 US troops in Jordan along the Syrian-Jordanian border.

In the absence of an end to the conflict in Syria, Jordan faces a series of serious risks. In the immediate future, Jordan’s economy will continue to bear the brunt of the Middle East’s gravest refugee crisis since 1948, while existing social tensions over the influx hundreds of thousands of refugees continue to percolate across the country.

In particular, the long-term of implications of permanent refugee camps residing on Jordanian soil threaten to unsettle the delicate demographic makeup that has allowed the Hashemite monarchy to retain control and survive over the years.

As the influence of radical Islamist militants grows within the armed opposition, including groups that advocate hardline Salafist ideologies or otherwise associate with al-Qaeda, the threat of blowback will also increasingly be felt in Jordan as Jordanian fighters (and others militants) seek out new targets in the region.