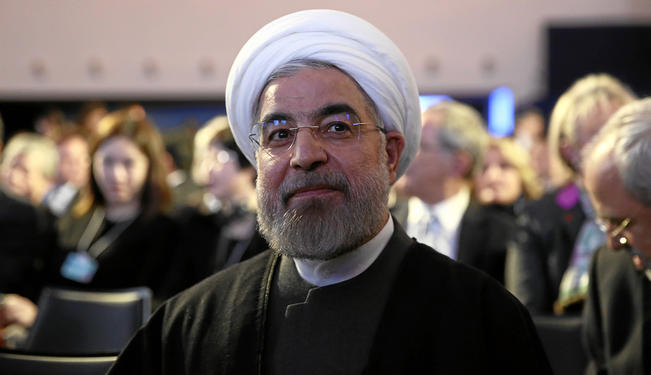 Analysts have been quick to make assumptions about President Hassan Rouhani’s diplomatic maneuvers, translating his diplomatic skills as reminiscent of Mikhail Gorbachev’s era of Perestroika and Glasnost.

So the question arises: Is Rouhani really a Gorbachev?

From a theoretical point of view, such comparisons shed little light on the direction of Iran’s political evolution. While Rouhani is comparable to Gorbachev in the sense that he too is an agent of change, the exercise of reforming Iran presents a more complex picture.

Not only are such comparisons gratuitously redundant (when Mohammad Khatami launched his reform program, numerous works sprung up comparing the reformer with the former Soviet leader), they are often dangerously subjective in nature.

In "Why the Democratic Party is Doomed," for example, Richard Miniter compares US President Barack Obama to Gorbachev in an effort to betray a conviction that the US is in a state of decline under a leader who is accelerating that trajectory through his efforts at reform. Walter Russell Mead raises a similar concern in "The End of History Ends," in American Interest, in which he warns of Obama’s Gorbachev-like attempt to correct the country’s past.

Mead argues that Obama’s attempts to disengage from the over-commitments of George W. Bush’s presidency have emboldened what he calls the "Central Powers": Russia, China and Iran. With the US in seeming retreat, these rivals "think they have found a way to challenge and ultimately to change the way global politics work."

Comparisons with Gorbachev are often carried out disparagingly with the goal of expressing contempt or disapproval. After all, although Gorbachev was attempting to change an outmoded, outdated system, the country over which he ruled disintegrated.

This is not the place to undertake an extended discussion of Gorbachev’s leadership, yet some observations are relevant. The fact is Gorbachev remains in the mind of his compatriots a tragic figure, deified by some and hated by others; some see him as a great reformer, others as a perfidious destroyer.

For many Russians, Gorbachev’s legacy was national humiliation, or what President Vladimir Putin has called the "greatest geopolitical catastrophe of the century."

The other problem with such comparisons is the element of wishful thinking. For the West, Gorbachev was the visionary leader who tackled the economic and political failings of the Soviet Union’s authoritarian system, introducing an era that ended Communist oppression, brought down the Berlin Wall, ended the Cold War, and expanded Europe’s community of democracies.

Iran bashers and detractors often make these dubious comparisons in the hope that some Gorbachev-esque character will suddenly turn up to unravel the Islamic Republic.

Thus, the comparison of any Iranian leader with Gorbachev is bound to be partial, and imbued with a subjectivity and reductionism that downplays the role of critical factors in shaping Iran’s political evolution.

If we are to improve our understanding of the sources of change in Iran under Rouhani, we need a more eclectic and multifaceted analytical framework.

The Pillars of Change in Iran

There are four guiding principles that have motivated successive Iranian political heads of state over the years. In fact, the political inclination of Iranian leaders in the past has been very much determined by the prioritization, instrumentalization or sometimes the interplay of these four principles.

Iran stands at the intersection of multiple, often contingent factors that shape its political reality. Rouhani’s challenge is to strike a balance between these factors and achieve a balance point or the nokhteh taadol.

1:      Republicanism and Participation (moshakerat): The emphasis is on popular sovereignty (mardom salari), civil society (jameh madani), and pluralism. This element was central to Mohammad Khatami, whose reform movement symbolized an effort to consolidate the rule of law and to stimulate civic activism.

2:      Economic Development (tose’eh): This was the cornerstone of Akbar Hashemi-Rafsanjani’s presidency. Described as a pragmatic centrist, Rafsanjani surrounded himself with technocrats in an effort to revive the post-war economy. In the late 1920s and 1930s, economic restructuring was the linchpin of Reza Shah Pahlavi’s state-sponsored modernization program.

3:      Economic Justice (edalat): The pursuit of justice was one of the main pillars of Mahmoud Ahmadinejad’s political platform, which was predicated on tackling poverty and corruption, and redistributing wealth. His personal former website, Mardomyar or "the People’s Friend," epitomized this mission.

4:      Independence/Freedom: The emphasis is on resistance of foreign interference and encroachment through nationalism. This was the cornerstone of Mohammad Mossadeq’s short prime ministership in the 1950s. He insisted that his country’s fight for possession of its oil resources was not only a quest for profits, but also a fight for liberty. This was also the leitmotif of Ayatollah Khomeini’s revolutionary slogan – "Esteghlal (independence), Azadi (freedom), Jomhouri Islami (Islamic Republic)."

Let us envision these four elements on an axis. This axis runs on two tracks: Iraniyat and Islamiyat. Iraniyat relates to Iran’s pre-Islamic heritage, Persian history, culture and civilization. Islamiyat corresponds to Iran’s Islamic past, values, dogma and tradition as well as classical revolutionary themes and slogans relating to Shi’a revolutionary revivalism, nationalism and populism.

Islamiyat runs on a continuum. On one side is Ejtehadi Islamiyat, which in the case of foreign policy articulation, advances a more moderate, enlightened and dynamic narrative, predicated on integration and dialogue. On the other side of the spectrum is Jihadi Islamiyat, which is characterized by a principalist and atavistic discourse.

The Jihadi and Ejtihadi approach to independence is very different. In Jihadi Islamiyat, independence translates into autochthonous, Soviet-style economic independence, guided by revolutionary ideals of self-sufficiency.

On the other hand, Ejtihadi Islamiyat advocates representation in and interaction with international organizations, integration into the global economy, and a non-confrontational political discourse.

Iraniyat also bifurcates in a similar way. To illustrate this point, let us focus on the concept of national independence. On one side of the spectrum, the emphasis lies on the radical negation of other civilizations (particularly the West), typified by the "Westoxication" or the "Clash of Civilizations" discourses.

The other end of the spectrum is characterized by integration and interaction. Khatami’s "Dialogue Among Civilizations" thesis best captures this orientation. Independence is found through emphasis on cultural commonalties and shared histories through an integrative narrative.

Rouhani’s approach falls squarely in the middle: National independence is found through calibrated and cautious engagement. His administration is challenged by hard-line elements that need to be appeased, thus engagement with outside powers needs to be measured.

Furthermore, history may have taught Rouhani that full-fledged dialogue does not always yield the anticipated result. Khatami’s international campaign ironically led to Iran being placed on an "axis of evil."

The body politic — the leadership, the elite, civil society and institutions — is so complex and variegated in relation to political culture, intellectual orientation, preference for certain ideas or categories of thinking, and traditional or normative values, that it is not easy to decipher and decode the nature of Iran’s political evolution.

The newspapers and dailies in Iran alone are a testament to this diversity (see Table 1). Let us relate them to the four categories above. For example, the daily Salam  places greater emphasis on Islamiyat, less on independence, and even less on justice, participation, freedom or development. Between Continuity and Change

So what does change really entail in Iran? A viable strategy for reform at this critical juncture in Iran’s history entails striking a balance between the four elements described above.

Moreover, a viable path requires the reconciliation of disparate orientations through the art of principled compromise. It means finding a balance between continuity and change, between Islamiyat and Iraniyat.

Rouhani is not wearing rose-colored lenses and is very much aware of the conservative resistance that lies before him — very much like Khatami, whose presidency was mired in factional wrangling and rivalry.

The difference is that Rouhani has a luxury of leadership that Khatami never knew. He enjoys political authority that flows from two sources:

Rouhani clearly articulated the discursive foundation of his foreign policy approach during the 2013 presidential campaign: "Constructive and dignified engagement with the world" (ta’amol-e hadafmand va ezatmand ba jahan). The pursuit of all four pillars outlined above remains a priority. However, Iran needs to upgrade the exhausted methods of the past.

This is something both sides of the political spectrum recognize (hardliners, moderates, liberals, and everything in between). With more executive steering power (and, most importantly, the Supreme Leader’s tacit support), Rouhani might just succeed in striking that delicate balance — the nokhteh taadol — a task that Gorbachev never lived up to.

*[This article was published in partnership with the Foreign Policy Association.]