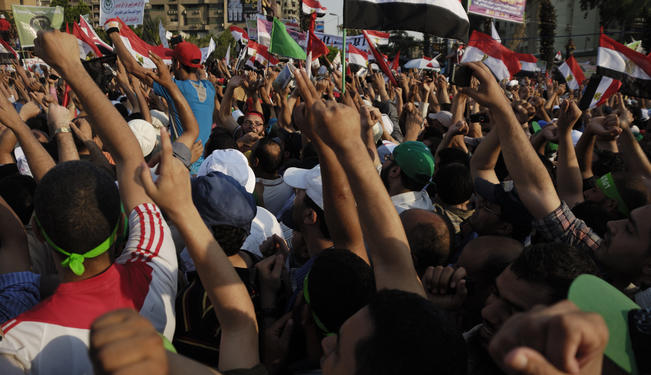 In the absence of other alternatives, Islamists were elected by default. This is the first of a two part series.

Political Islam is among the most controversially discussed issues in the Middle East and North Africa. While modern Islamist political thought traces its origin back to a rejection of European encroachment into the Muslim world – as the work of Jamal al-Din al-Afghani demonstrates – the most prominent example of Islamist political activism is the Muslim Brotherhood.

Founded in Egypt in 1928 by Hassan al-Banna with a strong anti-colonial element, the Sunni movement was outlawed in 1948 and experienced decades of suppression until it rose to power after Hosni Mubarak was ousted from power in 2011.

The Arab Uprisings, starting in December 2010, saw the election of various Islamist parties. As the region’s most powerful movement embracing political Islam, the Muslim Brotherhood was successful in subsequent parliamentary and presidential elections in Egypt. Its senior member, Mohammed Morsi, became the first civilian and Islamist president of the Arab world’s most populous nation in 2012.

Debates concerning a revival of political Islam were making the rounds, and many pointed to Islamist movements’ strong organization and community outreach as explanations for their success. However, the idea of a revival of political Islam did not only emerge in the wake of the Arab Spring. Many scholars describe the 1970s as an important period of Islamic revivalism.

A crucial event during this period was Iran’s revolution in 1979, which ousted the Western-backed Shah and brought Shi’a cleric Ayatollah Ruhollah Khomeini into power, who installed his velayat-e-faqih (Guardianship of the Jurist) as one of the key principles of the newly founded Islamic Republic of Iran. Apart from the implementation of certain areas of Islamic law in the domestic realm, especially immediately after the revolution, one of Iran’s key foreign policy tenets was the promotion of pan-Islamic unity.

These are just a few examples of political Islam’s long history in the Middle East and North Africa. One thing remains clear: As protests in Egypt and Tunisia demonstrate, proponents of political Islam are far from universally accepted as legitimate political players. A fundamental question in every specific context is what role shari’a will play in the realm of governance and law.

Fair Observer’s Middle East Editor, Manuel Langendorf, speaks to Mhamed Biygautane from the Mohammed Bin Rashid School of Government in Dubai — a renowned expert on political Islam and Islamist movements whose work has been featured in a great variety of media outlets, such as the BBC, the New York Times, Gulf News, and Al-Khaleej.

Langendorf and Biygautane talk about Islamist movements in the post-Arab Spring environment, the situation in Egypt, Sunni and Shi’a tensions, and the compatibility of Islam and democracy.

Manuel Langendorf: One of the oldest Islamist movements, the Muslim Brotherhood in Egypt, has just been dealt a significant blow with the ousting of Mohammed Morsi and the subsequent campaign against Brotherhood leaders. Do you see this as a crucial turning point in the history of political Islam?

Mhamed Biygautane: This is a very good question; however, defining political Islam is the first challenge we have to deal with before we judge the performance of the Muslim Brotherhood and their religiosity. There are numerous and important conceptual questions we have to raise just to define the core nature of political Islam.

As a point of departure, the term “Islamic” is vaguely used to denote organizations as fundamentally diverse as al-Qaeda, Hamas, and the Justice and Development Party in Turkey. The spectrum of Islamist parties can be political, missionary, or jihadi and the differences among these three categories are vast. However, most of people in the West confuse between them and consider any Islamist party as jihadi.

We have seen the Muslim Brotherhood fail in Egypt, and the same will eventually happen in Tunisia. The intervention of the military to oust Morsi on July 3 is unjustifiable, but it is an ultimate result of how deeply-embedded the military is within Egypt’s political scene. This is something that Mohammed Morsi took lightly. He did not rightly estimate the draconian powers of a state that had been ruled by the military since the establishment of the “republic.”

Morsi was overconfident about his capacity as the president to control the army. He failed to consider and be aware of the invisible mechanisms that steer the country’s direction, especially in times of transition during which any surprises can take place. He also didn’t take seriously the immense role of the Egyptian army and its influence either directly or indirectly in the decision-making apparatus.

I think that the failure of the Brotherhood is largely due to the mismanagement, miscalculations, lack of clear strategy, and overconfidence of Morsi and his party members. During the 12 months or so that he ruled in Egypt, Morsi did not govern for all Egyptians, as he had promised before assuming office. He prioritized his party members and privileged them with high posts in the government. In July 2012, Morsi challenged the authority of Egypt’s Supreme Constitutional Court, by issuing a decree that called parliament back to session after the Court had dissolved it. These actions were not backed by the constitution and only aggravated the political situation in Egypt.

These are just a few examples and illustrations of the mistakes Morsi made. The failure of his party could have been avoided had he seriously considered the fragile ecosystem in which he operated. He should have prioritized and focused more on triggering economic growth, established effective social welfare programs, and shown some immediate results over the performance of his party — especially in stabilizing Egypt. Yet, Morsi only tried to foster the position of the Brotherhood and secure the rights of its members at the wrong time.

It did not take long before the balance of power returned to its starting point in Egypt. The army is back to controlling the reins; Mubarak is free from all the crimes he had committed before the revolution; and Egypt is heading backwards.

Langendorf: In general, how do you evaluate the situation of Islamist movements in the post-Arab Spring environment?

Biygautane: I very much like the fact that you used the word “Islamist” and not “Islamic.” This way, you differentiate between an Islamist party or person that represents themselves more than they represent Islam. You hear a lot of statements in the media like “Islamic terrorism,” or “Islamic fundamentalism” and so on. With such language, we blame a religion for the actions of some individuals who represent their political and ideological frames more than the concept and teachings of Islam. When we use the word “Islamist,” we refer to the personal actions of a person or organization and their own interpretation and understanding of Islam.

In fact, the Arab Spring was a difficult test that Islamist parties had to go through in the Mashriq (Middle East) and Maghreb (North Africa); and as we see today, the vast majority of them have failed it, so badly. Islamist parties were elected not because they were the best, or that people in the region have turned very religious. Islamists were elected by default, in the absence of other alternatives. People have tried the parties of the right, left, socialists, liberals and so on. Yet the economic and social atmosphere had never evolved. Their last choice was to give a chance to Islamist parties, given their religious discourse that always calls for justice, development, and right-doing.

However, as I indicated in a BBC interview in early 2011, the Islamist parties do not have the necessary knowledge, expertise, the know-how and exposure to government administration and management practices. For decades they have been excluded, fragmented and severely marginalized in most of the region. Handing to them the affairs of a nation overnight would not result in anything more than added economic, political, and social chaos.

This is the situation nowadays. Islamist parties have left a negative mark in the history of the region. They have failed dramatically to deliver what they had promised their people, but this is an ultimate result of their lack of expertise and prioritization. When Islamists came to power, they came at the most critical time. The repercussions of the financial crisis are still widely felt in Europe and the Arab world. Unemployment rates have been high in the region for the past two decades, and worst of all, people wanted immediate results. All these factors were against the Islamist governments and not for their benefit.

Langendorf: In the context of the Syrian Civil War, there is increasing talk over an intensified Sunni-Shi’a conflict along religious lines — with Saudi Arabia and other Arab Gulf states on one side, and Iran and its proxies like Hezbollah on the other. Do you share this view, or do you see it as a misinterpretation?

Biygautane: Well, I do not really see it as a misinterpretation, but politics is a very dangerous and tricky game. In a realpolitik perspective, regimes use all possible ideologies and tools to get what they want regardless of whether they believe in them or not. Theology is a highly influential ideology that has worked out for regimes throughout history.

The differences between a Sunni and Shi’a are totally different than they were in the 7th century. They are now more political than religious. Since the Iranian Revolution of 1979, the differences between these two sects have intensified for political reasons. The repression of the Shi’a in Iraq and other Arab countries where they constitute the minority, is what has fueled and driven the hostilities between the two sects.

Now, Iran tries to provide generous financial and moral support to any Shi’a government. Spiritual leaders in Iran view this as their mission on Earth to protect their Shi’a ideology from the Sunnis’ dominance. The conflict in Syria has revived and intensified these differences among different regimes with varying beliefs.

*[Read the final part on November 7. This article was produced in partnership with the Foreign Policy Association.]