At the end of April, days before the latest conflict between the Israelis and Palestinians surged into the headlines, US Secretary of State Antony Blinken held a meeting in Washington with two Israelis: the head of Mossad, Israel’s spy agency, and the Israeli ambassador to the United States. The Israelis were seeking to prevent the US from returning to the Joint Comprehensive Plan of Action (JCPOA), the nuclear deal with Iran from which Donald Trump had unilaterally withdrawn in 2018.

In an Increasingly Paranoid World, Do Allies Actually Exist?

On April 29, Reuters reported that Blinken’s meeting with the two officials “followed talks … between US National Security Adviser Jake Sullivan and his Israeli counterpart in which the Israeli delegation stressed their ‘freedom to operate’ against Iran as they see fit.”

Israel believes in its “freedom to operate” as adamantly as some Americans do in their constitutional right to bear arms. It is difficult to understand Israel’s notion essentially of freedom to aggress in any other sense than that of seeing itself as above the law of nations. In one sense, the Israelis are right. There is no international law on the books that enforces compliance. In an era of rising populist nationalism, many leaders are tempted to claim the freedom to operate as a natural right. Only the military and economic might of the US threatens to hold some of them back. Assured of Washington’s support of any of its aggressive actions, Israel believes it has exceptional freedom to operate.

The Israeli government made it clear in January that it would actively counter any attempt by the new Biden administration to return to the JCPOA. “Reiterating Israel’s position that it does not consider itself bound by the diplomacy, Intelligence Minister Eli Cohen said, ‘A bad deal will send the region spiralling into war,’” Reuters reported. Is this a bluff or a sinister threat? Or both? No one should feel surprised, given Israel’s aptitude to flex its muscles whenever it feels threatened and every US administration’s habit of regularly inclining to Israel’s will.

Every observer of the ongoing drama in the Middle East should be wondering whether it makes any sense at all to be asking such questions. The spiraling war in the Middle East Cohen evokes would not resemble in scale or catastrophic consequences the kind of skirmish that last month’s 11-day conflict over the Israel-Gaza border turned out to be. Iran is a large and powerful oil-producing nation that does not yet possess nuclear weapons but has extensive resources. It has significant potential allies in Asia, including China, though it would be utterly unlikely that in the event of a shooting war between Israel and Iran, China would allow itself to be drawn into a military conflict.

Israel, of course, has the advantage of being a nuclear power, though no one acknowledges that in official circles. That non-acknowledgment has conveniently spared Israel the duty of taking a position on non-proliferation. As its government refuses, in Cohen’s telling, to be “bound by the diplomacy” while at the same time expecting the United States to support even its most aggressive initiatives taken in the name of self-defense, Israel’s threat of a spiraling war should offer a lot of people cause for concern.

Most observers believe that everything will depend on the role the US may or may not accept to play if there is an eventual conflict. In its first few months, the Biden administration has, perhaps artfully, disguised its deeper inclinations. At the same time, it has given some people the impression of being rudderless. That has added to the overwhelming uncertainty that makes prognostication about future events in the region a particularly delicate exercise. But given the stakes — according to Israel, a possible third world war — it may be time to address the underlying problems.

Israel appears to be invoking the logic of MAD (mutually assured destruction) that reigned during the Cold War. But what was true of the US and the Soviet Union is difficult to imagine applying to a state the size of Israel.

Despite Israel’s belief in its “freedom to operate,” the idea that it could unilaterally start a war with Iran simply because it didn’t like the deal the US agreed to is on its face absurd. It would be tantamount to declaring war on the US simply because the Americans failed to respect Israel’s wishes. This degree of geopolitical absurdity illustrates the specific kind of diplomatic hyperreality Israel has successfully cultivated, thanks in large part to the pattern of accommodation exhibited by every recent US administration.

Al Jazeera published its own version of the Reuters’ piece from April, reprinting most of its substance before adding some remarks of its own. After expanding its commentary on the various threats and hypotheses, including Cohen’s vision of  “spiralling into war,” it adds this troubling conclusion: “The source declined to say how Blinken and his aides responded.” As with so many of President Joe Biden’s real intentions, on both domestic and foreign policy, and his capacity to deliver on promises and commitment, the pundits for the moment are condemned to wait and see.

Despite the current vacuum of power in Israel itself, likely to be provisionally resolved by a new coalition government, all of the nation’s current and future leaders — including the military — are opposed to the idea of the US revitalizing the JCPOA. But does Israel still have the clout to influence US policy? Donald Trump solidified the belief among the Israelis that the US is capable of betraying its own interests to please Israel. It played the same game reasonably successfully with Barack Obama, who consistently vowed to defend Israel’s interests. But it couldn’t prevent Obama from promoting and signing the JCPOA in 2015.

Just before leaving office, Obama broke with another tradition by abstaining from using the US veto on a United Nations Security Council resolution demanding a halt to Israeli’s construction of settlements in the Israeli-occupied West Bank and East Jerusalem. To counterbalance the effect of the affront, two months earlier, the lame duck president signed off on a historic and astonishingly generous promise of military aid for Israel to the tune of $38 billion over 10 years.

Daniel Sonnenfeld, writing for The Media Line, an American website specialized in coverage of the Middle East, offers his update on the state of negotiations around a revitalized JCPOA. “While all the signatories have expressed their desire to see the deal revived, American allies in the Middle East have voiced concerns about this intention. Most notable is Israel, which opposed the deal strongly when it was first signed in 2015,” he writes. This sentence is remarkable for the carefully crafted reference Sonnenfeld makes to a group of Arab countries led by Saudi Arabia. Calling them “American allies” avoids evoking either the stigma associated with the autocratic Arab regimes, the most prominent of which has dramatically exercised its “freedom to operate” by murdering and dismembering a Washington Post journalist.

By the end of his article, Sonnenfeld resigns himself to concluding that, despite Israel’s objections, the US will return to the JCPOA. He cites Dr. Raz Zimmt, an Iran expert at Tel Aviv University’s Institute for National Security Studies, who affirms that “Israel has ‘no chance’ at changing the US approach to the deal.” Unlike the Israeli officials threatening to throw the region and into a catastrophic war, Sonnenfeld sees no prospect of the Israelis carrying out such a move or even challenging the Biden administration’s decisions on the matter. Instead, citing Zimmt again, he describes a future diplomatic ballet in which Israel will simply “focus on ‘formulating agreements with the Americans about what comes next.’”

Since the end of the 11-day conflict in May, things have dramatically changed for both the Israelis and Palestinians. As The New York Times reports, the latter now feel they “are part of the global conversation on rights, justice, freedom, and Israel cannot close it down or censor it.” Even The Times has taken a solid interest in their plight. Israel is struggling to close the chapter on Benjamin Netanyahu’s seemingly perennial premiership. Joe Biden has an open field in front of him to clarify some of the complex issues in the Middle East. The world is waiting to see how he handles it.

Biden Washes His Hands of the Israel-Palestine Affair 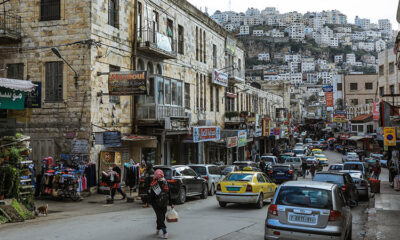