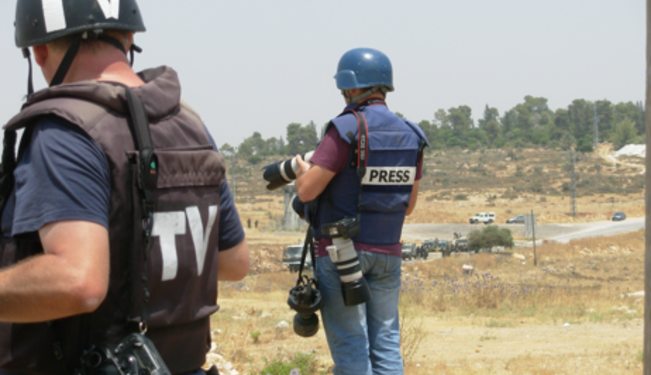 Palestinian reporters are muzzled by their own governments in the West Bank and Gaza. Government censors block certain political speech and kill criticism of local officials and municipalities. Reporters are also denied freedom of association by the Israeli military, which restricts their movement.

In June, the UN’s independent monitor of global freedom of speech, Frank La Rue, chastised both Israeli and Palestinian governments for muting speech in violation of international standards.

Shortly after touching down in Tel Aviv, I felt some of the pressure journalists here face. I told the immigration officer at Ben Gurion airport that I was a journalist planning to, among other things, do some work in the West Bank. The woman did not like what she heard.

She put my father and me in an adjacent room for over an hour, after which I was taken to a private room and thoroughly questioned. Why was I in Israel? Why was I going to the West Bank? What do I do for a living? Why did I have Lebanese stamps in my passport? The inquisitors wanted a business card, an ID proving that I was a university professor, my stamped boarding pass to prove from whence I had come, copies of all my hotel reservations with dates, and my Delta Airlines itinerary to show when I would be leaving. They wanted full names and cell phone numbers of everyone I knew in the West Bank. The security officials did not ask to scour my email inbox or other private accounts, although they do this to others.

My brief detention is nothing compared to restrictions on the movement of Palestinian journalists, which is stifled by a network of hundreds of Israeli military roadblocks and checkpoints, an indecipherable web of government permits and denials, and Israel’s segregation wall which wraps around Palestinians and covers over 450 miles—driving distance from Washington DC to Boston.

I visited the West Bank city of Qalqilya, which the Israeli wall was constructed to entirely surround.

One Palestinian I know, said the Israeli government arbitrarily told him he could visit Tel Aviv for the first time in his life, but that he could not fly anywhere from there. When Israel lets him leave the country, he must travel by bus to Jordan and fly from there.

Journalists covering Palestinian demonstrations in the West Bank are often targets for Israeli tear gas, stun bullets, and water cannons. I covered a demonstration in the village of Nabi Saleh, during which Israeli soldiers employed all of these measures, but I managed to escape the water blasts and stun bullets. I was unable to avoid the tear gas. (Palestinian teens were throwing stones, further inciting the countermeasures). On July 13, a New York Times reporter was detained and held in Nabi Saleh by Israeli forces, and eventually released.

The work of Palestinian reporters is also frustrated by the governments of Fatah and Hamas. “Harassing Palestinian journalists,” Brooke Gladstone said in a May installment of On the Media, “is not an exclusively Israeli occupation.” In Hamas-controlled Gaza, journalists are routinely harassed and imprisoned for criticizing local power brokers. All resident reporters in Gaza must obtain licenses to practice journalism from the Hamas regime. Hamas is about as fond of free speech as it is of the Knesset.

Journalists also pay a price for tensions between rivals Hamas and the PA. In the West Bank, the PA is especially rough with journalists from outfits like the Al-Aqsa TV network, loyal to Hamas. Conversely, journalists in Gaza sympathetic to Fatah are more intensely targeted by Hamas. Both governments, to varying degrees, have blocked circulation of newspapers sympathetic to the other side.

Palestinian Authority law embraces censorship if journalistic work threatens to disrupt Palestinian “unity,” and the PA uses this legal exception to do to journalists little less than what it pleases. Jillian York of the Electric Frontier Foundation wrote in April that the Palestinian Authority arrested journalists and others for controversial Facebook updates. Moreover, the PA has nary a sense of humor, for in 2011 it banned the politically satirical Watan Ala Watar from television after powerful PA officials tattled that they were being teased.

Israel is fond of direct censorship, too. Israeli forces stormed the offices of a Palestinian TV news network in the middle of one night in February and drove off with their equipment (the same station, Al Wattan, has been shut down on multiple occasions by the PA as well). Some journalists in Israel must submit their copy to military censors to advance their work, and Israeli security forces can quite easily enforce bans that silence reporters on certain topics. On numerous occasions Israel has locked up Palestinian journalists and held them for extended periods without charge. Hamas and the PA have done the same.

The argument that journalists, even Palestinian reporters, have it better in Israel as opposed to the occupied territories is true, but the distinction hardly warrants a parade. Israel has far too many speech codes reminiscent of autocracies, but Palestinian forces also cast a cloak of misery on reporters under their control. There are many Palestinian journalists who endure far more harassment and assault from Palestinian forces than from Israel.

Palestinian journalists have no state of their own, but they are jostled and harassed at home by multiple governments that rarely give them a break.