When Norah O’Donnell, interviewing Saudi Crown Prince Mohammed bin Salman (MBS), boldly opened the dialogue with the question the world has been waiting for hard-hitting journalists to ask — “Did you order the murder of Jamal Khashoggi?” — no one, including O’Donnell, could have been surprised at his answer: “Absolutely not.” This is the surest indication that, if she was expecting a frank answer, she shouldn’t have asked the question at all, or at least not in that way.

Still, it could have been the boxer’s equivalent of a quick left jab intended to create an opening for a powerful flurry of knockout blows. On cue, O’Donnell followed with a truly challenging question, building on the crown prince’s  extraordinary claim made last year that though he had nothing to do with the Saudi journalist’s assassination on October 2, 2018, he gets “all the responsibility.” She asked, “What does that mean that you take responsibility?”

MBS then provides as obviously evasive and disingenuous an answer as any astute journalist might expect: “When a crime is committed against a Saudi citizen by officials, working for the Saudi government, as a leader I must take responsibility. This was a mistake. And I must take all actions to avoid such a thing in the future.”

A synonym for inaction, when promised by a political leader, especially a hereditary despot

Rather than reminding MBS that he hasn’t answered her question, O’Donnell drops that line of questioning to throw some gentle softballs that will lead to other predictably evasive answers. The crown prince has already claimed that things happened “under” his watch, meaning, of course, that the crime was committed by underlings, who will be duly punished in some distant future, which nobody cares about because the fate of underlings has no importance for news professionals.

Mohammed bin Salman brings this point home when he explains that “once charges are proven against someone, regardless of their rank, it will be taken to court, no exception made.” “Once” is the key word here because if “once” for any reason doesn’t happen, the correct timeframe will be “never” or at least so far into the future that no one will remember what the fuss was all about. O’Donnell might have pushed him by asking him about timeframes and when this promised justice would take place. His answer could have given a hint about how serious or evasive he was being. But just like the question about responsibility, she didn’t pursue that opportunity.

But her biggest failure at this point of the conversation is accepting MBS’ remark that it was all “a mistake,” followed by his promise to avoid such mistakes in the future. What did he see as the mistake, she might have wondered. Since he claims he didn’t do it, was it the fact that he allowed underlings to do it without his knowledge or that he hadn’t organized it in such a way that no one would have noticed? O’Donnell could have followed up with two important questions: Explain what you mean by “mistake,” and describe the measures you intend to take to prevent it from happening again. Instead, she asks him a question that he can answer with a simple denial: “How did you not know about this operation?”

When MBS answers that question by claiming that it’s impossible for him to know what 3 million people working for the government are doing, O’Donnell does, for once, try to push him into a corner by reminding him that the plot was engineered and executed by two of the crown prince’s “closest advisers.” She pertinently asks, “[H]ow could you not know?” Once again, he evades answering the question and she makes no attempt to follow it up. She accepts his reassuring promise that “no exception” will be made, which is at least as convincing as O.J. Simpson’s promise to find the real killer of his wife.

Then comes the most curious question of the entire interview, where O’Donnell appears to accept MBS’ declaration of innocence: “When you heard that people close to you and in your government carried out such a grisly murder, and that the American government thinks that you ordered it, what did you think?” He begins his evasive answer by contradicting her accusations. He claims that no one close to him was involved in the crime. She could have cited evidence of their involvement, but instead tries to throw her knockout punch. She repeats the CIA’s conclusion, telling him “you probably ordered his death.” This seems bold but, of course, goes nowhere since he has already denied it.

O’Donnell then kindly informs MBS that his image in the US is suffering because of the Khashoggi murder and the war in Yemen. He brushes that off by promising that “we shall overcome” and the future will be better than the past, meaning it’s just a PR problem. Apparently happy with that response, she turns the questioning to the recent attacks on Aramco’s oil facilities, an issue on which the US and Saudi view is identical.

O’Donnell then implicitly endorses the accusations of the Saudis and the Trump administration that Iran was responsible for the attacks, without mentioning that that hasn’t been proved. O’Donnell then asks the most absurd question of the interview: “What do you think was the strategic reason that Iran struck Aramco?” MBS uses the opportunity to insult Iran.

The message viewers are left with boils down to the simplistic lesson that Mohammed bin Salman is a murderer and liar. This is of course very bad, but since nothing can be proved and the Saudis are allies in the management of the world economy — as compared with Iran who is America’s enemy — if they promise to behave themselves in the future, all will be forgotten, if not forgiven. The 80-year-old history of friendship between the US and Saudi Arabia is intact and safe. We should even admire MBS as an intriguing “man of contradictions.”

This interview demonstrates one thing: that the media will go overboard to comfort the status quo, even by going to the length of accusing the leader of crimes and then letting them go. Martin Smith of PBS had the recently revealed scoop of getting MBS to claim responsibility (though not complicity) in December 2018. Though incomplete, that was news. Getting MBS to repeat the point about responsibility without probing into its meaning is non-news, which may be another way of saying fake news.

Perhaps the most telling point in the conversation came with O’Donnell’s question about Khashoggi and Yemen: “How much has it hurt the relationship?” O’Donnell frames it as a simple image management problem. MBS puts it in a historical and implicitly economic context when he replies, “The relationship is much larger than that and this is a heinous incident and painful to all of us.” What he means is: You may think we’re criminals, but it’s in your interest to keep together a marriage that has lasted so long, with so much profit on both sides. CBS News seems to accept that as an honest description.

There’s a reason after all of why Mohammed bin Salman will let Norah O’Donnell interview him but not, say, Mehdi Hasan. (Actually, there’s more than one, but Hasan’s style would be the main one.) 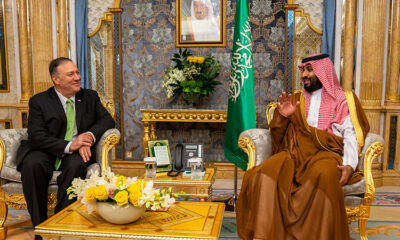