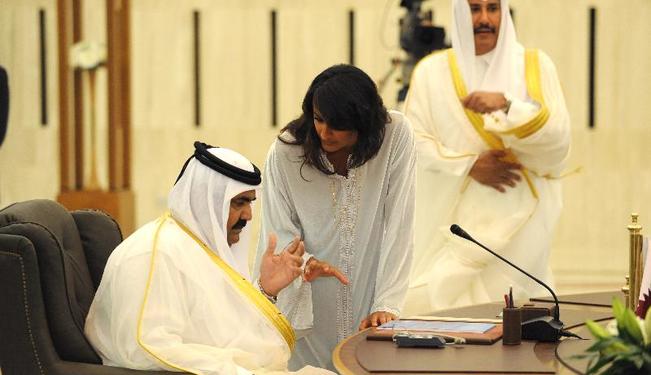 From Al Jazeera to Syria, the historic hand-over of power in Qatar holds various opportunities.

The quirky Emir of Qatar since the mid-1990s, Sheikh Hamad bin Issa al-Thani, stepped down in favor of his fourth son, Tamim, 33, on Tuesday morning. It is a historical step, insofar as it might form a precedent in the Gulf Cooperation Council (GCC) of six Gulf sheikhdoms — heretofore mainly ruled by old men.

Sheikh Hamad presided over the growth of Qatari GDP from $8 billion annually in 1996, to $174 billion a year, today. The Qatari citizen population is only about 250,000, making the peninsula the wealthiest per capita in the world (mainly based on natural gas exports). Sheikh Hamad innovated in allowing the Al Jazeera satellite news channel to be founded and to operate relatively independently. It changed Arab television journalism forever, airing multiple points of views on key issues and allowing critics of the various Arab regimes to be heard. Al Jazeera gave a platform to the revolutionaries of 2011, at a time when local Tunisian, Egyptian or Libyan media attempted to downplay the revolutionary youth movements. Qatar also began playing a mediating role in disputes in the region, as when it negotiated a truce in 2008 between the Shiite Hezbollah and its Sunni opposition in Lebanon.

In the past two years, Qatar’s reputation has suffered among many Arab youth because of its backing for the religious Right (Ennahda in Tunisia, the Muslim Brotherhood in Egypt, Syria and elsewhere). Qatar has been a hawk on Syria, seeking the overthrow of the Baathist regime of Bashar al-Assad and being willing to arm even radical Sunni groups who have affiliated with al-Qaeda. On the other hand, its Arabic-language television station has been quiet about the crackdown on Shiite protesters in Bahrain by a Sunni monarchy. Sheikh Hamad once had a reputation for even-handedness, which in recent years he has squandered in pursuit of the spread of Sunni fundamentalism in the region. Likewise, the imprisonment of a Qatari poet for 15 years for insulting the ruling family pointed to a deep hypocrisy, since Al Jazeera had pointedly criticized Hosni Mubarak in Egypt for his crackdown on dissent and criticism of his regime.

Sheikh Hamad explicitly made reference to the creative role of Arab youth in recent years, saying:

“Our young [people] have proven over the past years that they are a people of resolve and fortitude; capable of accommodating the spirit of their time; realising its necessities fully and profoundly; coping with its newest; and above all contributing by their original thinking and creative initiatives. Thanks to all this, I recall the words of the fourth Caliph, Ali bin Abi Taleb, may Allah be pleased with him, who said: ‘Teach your children other than that what you were taught; as they are created for a time other than yours.’”

The absolute ruler of a Gulf sheikhdom urged Generation Y to put their faith in science (al-ulum, and not just "knowledge" as the official translation has it):

“The future lies ahead of you, the children of this homeland, as you usher into a new era where young leadership hoists the banner; bearing in mind the aspirations of future generations; working restlessly and relentlessly to achieve them, seeking guidance and support from God first and from the citizens; deriving force from the experience gained in running the country’s affairs; and the profound knowledge of realities in our region, particularly the Arab World. While I am certain you are up to the responsibility, I urge you to fear God by seeking knowledge and working hard; let [the sciences] be the beacon lighting your path; helping you build the future of the nation to its best; by knowledge emerge able generations, capable of shouldering responsibilities and embracing the straight right path.”

While Sheikh Hamad is among the more interesting political minds in the Middle East, and he has helped shake the region up in ways that are often positive, there are a number of potential steps his successor could take that would be truly revolutionary.

Sheikh Tamim will likely revive the plan to move to an elected consultative assembly. But what would really change the Gulf would be for him to accept becoming a constitutional monarch. Kuwait was, six years ago, the closest of the GCC countries to that form of government, but it has become much more authoritarian. It is a hard sell for Qatar to promote democracy elsewhere in the Arab world, yet to lack it at home in Doha.

Likewise, the GCC countries suffer from a local labor shortage produced by their vast hydrocarbon wealth, which generates the need for workers and for businesses beyond what local populations can supply. Millions of Indians, Sri Lankans, Pakistanis, Filipinos and others have flooded into the region. Qatar’s population is 1.8 million, but about 1.5 million of that consists of guest workers. Guest workers in the Gulf states most often need an in-country patron or kafeel, whose relationship to them can often be exploitative. Even workers from India or the Philippines who have lived for many years in a Gulf country are limited to relatively short-term visas. They can easily be deported or denied renewal of their visa, which is how any concerted attempt at workplace unionization or strikes are dealt with. There is typically no path to citizenship for these guest workers, even if they live in a GCC country all their lives.

Using Qatar’s natural gas wealth as a platform on which to pursue renewable energy, its export to energy-hungry Pakistan and India would help firm up Qatar’s future in a world where hydrocarbons are likely to decline in value. Qatar is vulnerable to losing coastline if the seas rise three or four feet in this century, as is expected because of climate change.

So another really important innovation Sheikh Tamim could pursue would be to offer citizenship to long-time residents, to regularize immigration laws and establish a path to citizenship for immigrants, and to allow unions, strikes and more justice for the workers who are making Doha run.

This step, in turn, would require a national educational system that could induct the immigrants into a Qatari national identity.

Sheikh Tamim would raise his country’s esteem in the eyes of the world if he pardoned poet Muhammad al-Ajami and established genuine freedom of speech in the country. Qatar achieved its current stature by demanding more open societies elsewhere in the Arab world. It risks undermining those achievements by being seen as hypocritical.

And a return of Qatar to its 2008 role of mediator and peace-maker would benefit it and the region. Muslim Brotherhood rule in Egypt has been a disaster, and the Sunni radicals in Syria are damaging the reputation and prospects of the rebels there. For Doha to pick winners so boldly risks a backlash if they don’t do well. And violent interventions like that in Syria could someday backfire by attracting violence to Doha.