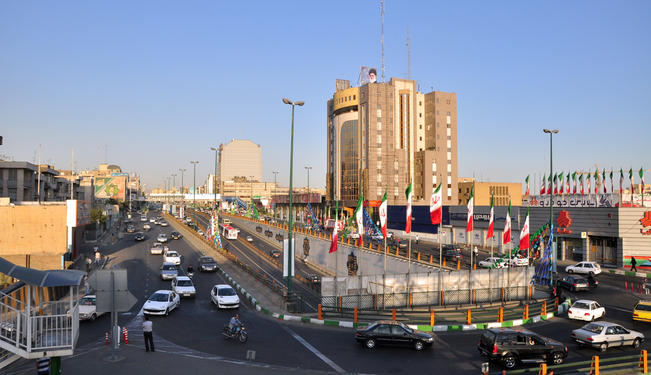 Under Rouhani, It will be a lot harder to demonize Iran. This is the first of a two part series.

After Mahmoud Ahmadinejad's eight years in office, Iran elected Hassan Rouhani as the country’s new president on June 15. Rouhani, an early supporter of the late Ayatollah Ruhollah Khomeini, held several high-ranking positions in the Islamic Republic, including the role of nuclear negotiator.

In his first press conference, Iran’s president-elect spoke about increasing “mutual trust between Iran and other countries” and stated that “mutual trust and transparency within the framework of international regulations and principles are the solution to put an end to sanctions.” In the current situation, where new sanctions are likely to put increasing economic pressure on the incoming government, Rouhani's words are seen by some as hopeful signs for progress and as a counter-point to the often polarized discourse over the last few years. However, it remains to be seen what actual policies the new president will implement; particularly because he also spoke of the need for the international community to acknowledge Iran's “nuclear right.”

Ever since the overthrow of the western-backed shah and the establishment of the Islamic Republic, antagonism and suspicion have been the dominant features of Iranian-Western relations. The idea of an Islamic Republic with a religious supreme leader being the ultimate authority in Iran has been the subject of much discussion and interpretation. Some experts, however, claim that the Islamic Republic, its political system, and its leaders are often misunderstood and misrepresented in the West.

One of these experts is Shayan Arkian, the editor-in-chief of Irananders and chair of the German think-tank, Deutsches Institut für Iranische Politik- und Wirtschaftsforschung (German Institute for Iranian Policy and Economy Research). He speaks to Manuel Langendorf, Fair Observer’s Middle East Editor, about the election of Hassan Rouhani, Mahmoud Ahmadinejad’s legacy, the (un-)democratic nature of the approval of presidential candidates, the situation of women in Iran, and the Green Movement.

Manuel Langendorf: On June 15, Iran elected a new president. Despite the field of contenders having been dominated by conservative candidates, Hassan Rouhani, who has often been described as a moderate in the media, won with a clear majority. Was this a surprise to you?

Shayan Arkian: Not really. Elections in Iran in the last 16 years have been very dynamic and have often brought surprises. For example, in 1997, to everyone’s surprise, a reformist called Mohammed Khatami won the elections and in 2005, it was a nobody, Mahmoud Ahmadinejad, who was victorious. However, I have to put your statement that Rouhani won by a clear majority into perspective. He only garnered 261,251 votes above the 50% threshold. That is a negative record in the Islamic Republic, since victorious presidential candidates have normally been elected with a broad majority. This close result is also noteworthy because the majority of candidates were conservatives, and after the reformist Mohammed Reza Aref dropped out of the race in favor of the centrist Rouhani, it would have been easier for the latter to unite the votes of the centrists, reformists, and the important floating voter.

The votes for the conservatives were indeed split into three camps, and because they could not agree on a single candidate to the very end – although two of them promised that – they alienated those voters who were fed up with the 16-year-old dispute between reformers and conservatives and amongst conservatives themselves. Consequently, they gave their vote to someone who campaigned for a unified meritocratic government and to the only one who explicitly spoke out against extremism on both sides. Thus, the starting point of this election and its development was not in favor of the conservatives.

Langendorf: What does Rouhani’s election mean for Iran in the next four years? How much influence will he have regarding Iran’s critical issues; for example, the controversial nuclear program?

Arkian: The difference will be relatively stark since in politics, perception is often the benchmark. Look at Barack Obama, for example: The policies of the US president are not essentially different from his predecessor, but he still won the Nobel peace prize. This is related to the atmospherical change. We can already see a change to the political atmosphere with regards to Hassan Rouhani. While there are already attempts by certain media and press outlets to internationally discredit Rouhani, it will be a lot harder to demonize Iran as it was during Ahmadinejad’s presidency. This will bring opportunities to those western actors who have so far been criticized as pursuing an appeasement policy as soon as they wanted to pursue a rapprochement policy towards Iran. In short, the substance of Hassan Rouhani’s foreign policy will not differ much from Ahmadinejad’s. But the style and appearance will indeed change, and this is not to be underestimated in today’s international relations.

Langendorf: Iran, in its current polity, is an Islamic Republic where election candidates have to be pre-approved by a Guardian Council. Many see this as undemocratic and neither free nor fair. Given that certain criteria for candidates are anchored in law, is this accusation justified?

Arkian: This accusation is superficial, if you consider that in free western political systems the candidates are filtered by parties and normally the voter can only choose between two candidates for the top executive position. Insofar, one should also talk about a selection instead of an election in those political systems.

Langendorf: But in Iran, Ayatollah Khamenei has direct influence on the selection of a certain part of the Guardian Council. Does this not change the situation? One could also refer to inner-party democracy.

Arkian: For historical reasons, Iran does not have a party democracy. In elections, single candidates are always directly elected (thus, in the Iranian parliament there is no whip). This is why the constitutional court, the Guardian Council, is in charge of the process of filtering candidates. As in all constitutional states, the constitutional court is independent from the government and its members are not directly elected by the people, but directly and indirectly by elected institutions – in the case of Iran by the parliament, the head of the judiciary, and the religious-political leader (better known as supreme leader). The president and the government have no influence on the selection of the members, and therefore, they have no possibility to decide the election for themselves beforehand.

Considering inner-party democracy, you are aware of the fact that western systems have deficits in this regard. The party leadership that has emerged in an elitist way, is not bound by party decisions. Again, the party decisions are hardly developed by the party base. And on the other hand, the electoral lists or the ticket to become a candidate do not originate from the party base. But what is even more important, the party base itself is not elected by the general population in order to legitimize anything democratically.

So it is apparently not decisive if one becomes a candidate through a democratic process (i.e. through elections by the general population), but rather if that candidate is democratically elected as president by the general population. In Iran, candidates for the presidency need to garner 50% plus one vote in order to become president. By contrast, in western parliamentary democracies which have an election threshold, governments often bring together less than 50% of the votes – as for example in Germany, where the current government only gained 41% of the votes and consequently does not represent the majority of voters. I can assure you that if in Iran a government would have been elected by only a minority of voters into office, we would have heard this story all over the news in western media day and night.