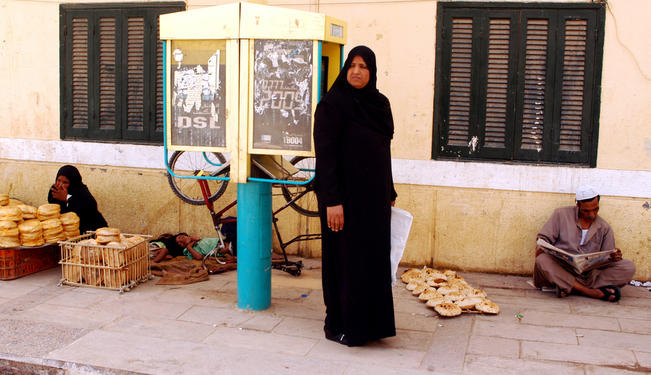 New trends show future changes in female consumer roles, and western corporations want in on it.

The axiom of advertising is to feel organic, but manage to represent a clarified and polished version of reality. "A reality to which one can aspire." The Arab woman is portrayed in many ways due to many different ideals set in place for her. Who she is and who she wants to be are in competition. Because of her shape-shifting visage, understanding female advertising roles from national to regional markets has never been an easy feat for western corporations hoping to turn advertisements into cash.

Something major in the Middle Eastern market has caught the eye of western corporations that motivates them to take up the challenge. Over the past decade, the Middle East's population has grown just under 2%, which is above the global average. The Middle East's population has grown to such heights mostly due to high birth rates, which spawned a young demographic. Patterns and trends show that this age group is the perfect target: it is part of a more urbanized consumer culture, has more money in their wallets, and embodies that modern edge. In many regions of the Middle East, a more modern taste must be acquired to digest images of females adorned in lipstick, seen shopping with men, and holding perfumes without hijabs.

Feminine hygiene industries are among the most vocal about this huge new opportunity to gain from female consumerism. Richard Gilings, business development manager for the Saudi German Company for Nonwoven Products (SGN), stated in February: “The Middle Eastern nonwovens industry is essentially a young industry but it is fast developing, and of course highly competitive within itself.” Revenue in retail hygiene sales is expected to reach $3.5 billion with 15% growth value in 2013.

In some parts of the Middle East, such as the UAE, Kuwait, and even Egypt, spreading a western message with aspiring female images seems fairly low-risk due to little restrictions on a female’s role in advertising. However, countries such as Iran and Saudi Arabia are less susceptible to modernization and while they have growing hygiene markets, ads featuring women risk banishment. Women's roles in advertising have been very limited there. This is because of Islamic interpretations in those countries that enforce ideals on what women ought to be.

In the days of the Caliphate, there used to be a ban on all humans appearing in art. Aniconism, a proscription against the use of sentiment being in art, was based on a fear of idolatry. This fear once proclaimed was written in the hadith to become law set in stone. Although in every era there have been images of animals and the Prophet Muhammad in Islamic art, the hadith had meant for worship to be prohibited to figures such as these during prayer. However, the pristine fear of idolatry and sin still looms. Images seen in advertising are now at the center of these bans.

In Iran, a celebrity or coveted soccer player is banned from advertising, as this is seen as "idolatry." Big-budget movie heartthrobs, such as Mohammad Reza Golzar and Bahram Radan, are on the blacklist as well. In 2008, a ban against ads featuring them was issued and broadcasted by the head of the information office in the Ministry of Culture and Islamic guidance, Ali Reza Karimi, who said: “Cultural and athletic role models… should be promoting chivalry rather than consumerism.”

With the many different forms “chivalry” can take, one form means women cannot be portrayed as an object of desire. Although many ads faced this kind of scrutiny in the past, the scrutiny was amplified since the 2008 ban was employed. There are currently watchdogs overseeing every advertisement with not just female celebrities, but young women in make-up for cosmetics commercials, without hijabs, and women in food and home appliance ads.

As the Iranian government banned ads one after another, many publications which relied on a female audience were closing down due to bankruptcy. Many women’s fashion magazines, for example, that were financed through advertising had to close down along with women’s journals such as Zanan e-Farda (Tomorrow's Women), which went bankrupt in 2003, and the women’s journal Fekre Rouz (New Thinking).

Iran also likes to give western corporations the cold shoulder. Whereas the US company Procter & Gamble leads the diaper industry with their Pampers in the Middle East, in Iran, domestic manufacturers, such as Zarin Seloloz, lead the Iranian market. Western sanctions against Iran are also a reason why Procter & Gamble do not dominate the market; though they have confirmed they still sell to Iran legally.

In Egypt, where the median female age is 24, a veiled woman is not broadcasted as an ideal. It is rare to come across her in advertising. Public state television shunned the use of a hijab or headscarf until Mohammed Morsi’s presidency, when the Brotherhood gave them the green light. Although, an estimated 80 percent of women wear a hijab in public. It is known that in many households, today, women decide where half of the family income goes. There is also a growing number of women in colleges and the workforce, especially in non-industrial jobs where gender segregation cannot exist. With young women holding such purchasing power, the million dollar question for western corporations wanting to buy ad space in Egypt is, “Hijab, or no hijab? What does a woman in Egypt respond to?”

In Saudi Arabia, this is not a question since a woman is economically dependent. In ads, a woman must be veiled and a separation of genders is typical. A Toyota commercial airing in Saudi Arabia shows a man in his car talking to his wife buying groceries, and although they are together during the last frames, the man is the main focus, as he is driving the car. Men are also behind the wheel in the decision to buy vehicles, so this separation is important to portray.

In 2012, there was shock among westerners when Swedish furniture and appliance company Ikea photoshopped women out of their ads for the Saudi market. In the original version for western audiences, there was a picture of what appeared to be a husband, wife and children brushing their teeth in the bathroom. The photoshopped version was exactly the same, except the woman vanished as though it were magic.

But this is common practice in Saudi Arabia, from putting clothes on female models to pixelating women without hijabs. Photoshopping women in ads would only pose a threat to western corporations if it compromised the female purchasing power.

If men in many countries of the region still keep women economically dependent and plan to do so within the next few years despite the medium female age being 23 in an era of “modernization,” western corporations should, for reasons explained above, put their eggs in Egypt’s basket.

The laws of demand are funny, however, as it is Saudi Arabia who is the top buyer of beauty care products, followed by Iran in the Middle East. The Saudi perfume market is estimated at $121 million by 2014.

In comparison, countries already heavily industrialized with western influences, such as the UAE and Kuwait, can feature ads that are ultra-conservative and Kim Kardashian bearing cleavage on the cover of Cosmopolitan Middle East. In the UAE, Iranian “chivalry” seems to be dead.

Despite Iran and Saudi Arabia's restrictive ways, many western corporations remain positive about inserting themselves into the lesser modernized female markets. Key trends the West looks at is female employment, increased emancipation, and purchasing power. In a time when the industry still has to rely more on word of mouth and the internet in certain regions of the Middle East, they are seeing the increasing trend of urbanization and are linking it with increased emancipation of women. This link does mean something in the western market, but it means nothing in the Middle East.

The West should be more wary: while industries are guided by consumer response, Islamic law is often guiding the women’s purchasing power. While the booming younger generation may cry “modernization,” western corporations such as hygiene product suppliers SGN must be hesitant about stepping in and trying to tackle the female market with aggression.

Similar to when the government places a ban on Islamic art, bans in advertising are based on fear. Idolatry, consumerism, and gender-mixing – can the western corporation really come in and challenge these terms? Probably not. There is a fear, especially in countries like Iran and Saudi Arabia that a woman may lose touch with the ideal set for her, whatever that ideal may be. The push for less Islamic law can often begin with a white man in a suit and tie that only ends leaving a brown woman in a niqab.

Even though western corporations prophesize female emancipation in the future, the more they try to push the boundaries of the female ideal in their ads, the more they will feed this fear. And it is the women who are left to suffer in the end.