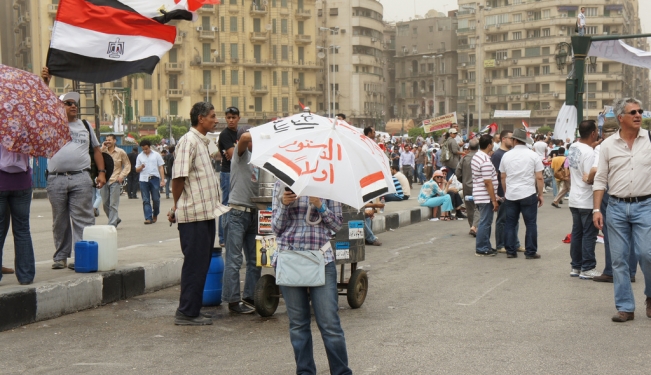 A commentary on the future of democracy in Egypt, post-Mubarak.

On July 8, 2011, in Tahrir Square, in Cairo, Egypt, at least one million Egyptians gathered for the “Day of Determination.”  They were joined by thousands of protesters in Suez, Sharm el Sheikh and Alexandria. In the view of the protesters, many of the promises of the January 25th Revolution had not been fulfilled. For example, Mubarak remains in a hospital, and no efforts have been made to put him on trial. Police officers who killed innocent civilians, making them martyrs of the Revolution, have been released back on Egypt’s streets. Corrupt ministers who helped Mubarak in his efforts to steal massive sums from the Egyptian people have been tried and set free, with no accountability. Weeks have passed and the Tahrir sit-in continues. Unfortunately, the protesters' peaceful efforts have been met with violence—possibly from the old regime, and possibly from ideological opponents. As the protests continue, street clashes are increasing in frequency. Egypt is a long way from a democracy, and much remains to be done, but the Egyptian people are unbowed.

Indeed, there are promising signs on the horizon for Egyptian democracy. First, it is heartening that the people are still willing to take to the streets to insist that Egypt moves forward towards a democracy. In addition, significant activity is occurring on the political front as new parties, which were not present before the Revolution, emerge. It is an amazing opportunity to watch new parties emerge in a fledgling democracy. It is a democratic miracle of sorts that observers will have the chance to watch this process in Tunisia, Egypt and Southern Sudan at approximately the same time. This essay will be the first in a series of efforts tracking this phenomenon.

The western press has been largely obsessed with tracking the movements of Al Ikhwan, or the Muslim Brotherhood, as they are known in English. There is no question that the Muslim Brotherhood (MB) will be a player in the new Egypt. Yet, there are many other political forces in Egyptian life. In terms of the “Old Parties,” or parties that were present before the Revolution, one major party that cannot be ignored is the National Democratic Party (NDP). This was the party of former President Mubarak. Like the Communist Party of the former Soviet Union, the NDP was more than a political party: it was a patronage stream, an economic channel, and a complex multi-level institution. Although the NDP is technically no longer present in Egypt, aspects of the party are still in power. The Government of Egypt, currently ruled by the Supreme Council of the Armed Forces (SCAF) has many old ministers, and high level, mid-level and petty bureaucrats that are very much part of the old government. The Revolution deposed Mubarak and many of his top aides, but the organizations and institutions of Mubarak’s Egypt are still very much intact. Close attention should be paid to what parties the old Mubarak loyalists join or support.

In addition to the Islamists, and the NDP, however, the Egyptian political scene is vibrant and varied. A point often ignored by the western press is that Egypt has a long leftist tradition. Since 1952, this strain has been expressed by the Nasserites, as well as by the Tagamoo party. However, with the advent of the Revolution, new leftist parties have emerged. These include the Public Social League, or the Coalition of Socialist parties (Al Tahalof al Shabee Al Eshterakee). It is a reconstituted party built of leftists who have splintered off from the Tagamoo in an effort to revitalize the Egyptian socialist tradition. They are firmly committed to the civil state, the rights of women, improvements in health care and education, and supporting the farmers, the workers, and the youth. This group has solid intellectual credentials, significant experience, and a sophisticated long-term strategy. Some of their top leadership includes Abdel Ghaffr Shokr and Dr. Ibrahim Alessawie. They may not win an enormous amount of votes in the first election, but they are certain to be influential on the Egyptian political scene in the coming years. Another moderate leftist party in the vein of the British Labor party, or the German Social Democrats, is the Egyptian Social Democrat party. This party includes many Anglo Christians and Copts, but is styled in the grand old tradition of European moderate left. It is led by Fareed Zahn, Dr. Mohamed Abo al Ghar, and Samer Soliman.

In addition to the more leftist parties, a new generation of liberal, free market parties are emerging in Egypt. These include the Free Egyptians (Hezb Al Masreen Al Ahrrar) party. This party was established by telecommunications mogul Naguib Sawiris, and supports free enterprise principles. It supports improved equality for women and Copts, a civilian government, and major efforts to reduce poverty. Another important liberal party is the Democratic Front Party (Hezb Al Gabha Al Democrateya) led by Dr. Osama Al Ghazaly Harb. This party was extant under the Mubarak government, but refused to participate in parliamentary elections. It fought for measures to secure fair elections under Mubarak. The party participated in the Egyptian Revolution, and is popular with middle-aged Egyptian voters. Amr Hamzawy — a perennial favorite among the youth due to his good looks, charisma, and impressive intellectual credentials — is currently affiliated with the Egyptian Freedom Party (Masr Al Horeya). He has returned from his post with the Carnegie Endowment in Beirut to help build political awareness in Egypt. The Egyptian Freedom party supports democracy, delegation of authority, the sovereignty of law, equality, and a reduction in social classes. The party also supports decentralization and more autonomy for governorates.

One debate that has raged in Egypt for the entire spring has been the timing of elections. The military committed to holding parliamentary elections, followed by a new constitution and presidential elections. There are  problems with this schedule. First, it does not provide sufficient time for developing a new constitution, and second, it seems to foreclose the possibility of a true parliamentary system with a prime minister, in favor of a ‘strong president’ system. The conventional wisdom had been that parliamentary elections would be held in September. Nonetheless, this schedule seemed rushed given that Ramadan more or less ends on August 30th. In an interview with Abdel Ghaffr Shokr of the Coalition of Socialist Parties in late June, Shokr explained that given the multiple steps that are required to hold elections, September elections simply were not feasible. This analysis was confirmed when the SCAF said preparations for the vote would begin on September 30th, 2011. In many ways, this delayed schedule is good news for multi-party democracy in Egypt, as it gives more time for civilian, non-Islamist, non-NDP political forces to prepare for the parliamentary vote.

There are many more Egyptian parties in formation. Fair Observer will attempt to track their emergence and provide as much information on them as possible, relying on first person interviews with party leaders, and a careful perusal of the Egyptian press. The semi-permanence of the protest in Tahrir may be a positive sign for political development in Egypt, as activists will have time to wrestle with their intellectual stance on difficult issues, and clearer platforms may emerge from the parties involved in supporting the protests.