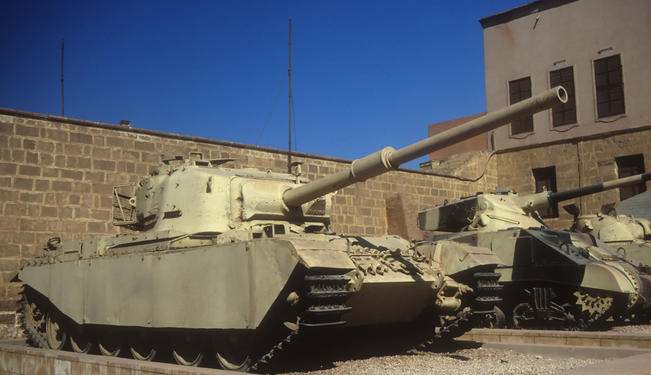 Egypt’s new status quo is a reaction to the very principles of the January 25 uprisings.

On October 6, Egypt celebrated the 40th anniversary of the ﻿Yom Kippur War with Israel — known to Egyptians as the October War — with an unprecedented level of popular emotional engagement and important political statements. The historical event became a vehicle for reflections ﻿upon the current conflicts in the Egyptian street and the ruthless reshaping process of the first post-Arab Spring country.

During Hosni Mubarak's rule, people used to watch the anniversary performances on TV with live broadcast from ﻿the Nasr City conference center. This time, it was ﻿instead held in one of the largest open-air stadiums in Cairo, with a painstakingly choreographed show delivering domestic and international messages which deserve a closer look.

The on-stage hosts were a Coptic and a Muslim actor, narrating the scene of the meeting between military officials shortly before October 6, 1973, the date seen as the start of the war﻿. They clearly emphasized the Christian name of General Baki Zaki Youssef, who ﻿came up with the idea to destroy the Israeli Bar Lev Line defenses. ﻿

A few minutes later, the whole pyramid background of the stage reflected an icon of Mary and baby Jesus, while a chorus chanting "Kyrie eleison" was followed by a supplication made up of the Lord's Prayer and some Muslim words. On the other side, a camera was fixed on General Abdel-Fattah el-Sisi who was surrounded by the son of Gamal Abdel Nasser, the wife of Anwar al-Sadat and several Arab leaders. Finally, top Egyptian and Arabian Gulf singers performed with allusions and gestures ﻿exhorting el-Sisi to "accomplish the journey" he began.

This scene focused on el-Sisi being portrayed ﻿as Egypt's savior. The legacy of ﻿the October War, which restored the dignity and reputation of Egypt's armed forces, was employed to support el-Sisi by knitting a narrative of Egyptian ﻿military history into the show. The theme was Egypt being unified against "evil intruders" ﻿throughout history, starting from the ﻿Hyksos (circa 1800 BC) to the Tatars, Israel (1967-73), and finally "the bats of darkness" – an allusion to Islamists – with the image of el-Sisi appearing on the massive pyramid in the background of the stage.

Surrounded by the heirs of Nasser and Sadat, in his speech, General el-Sisi recapitulated every icon of historical leaders idolized by Egyptians. Signaling his victory over the Islamists, el-Sisi addressed Egyptians with tender language, borrowing the calm style of Nasser and the powerful implicit, yet very recognizable, gestures ﻿of Sadat.

His message to the international community was that "the Armed Forces of Egypt are unbreakable just like the pyramids." Addressing Arab countries, he said: "The Egyptian army is the army of the Arab world… Egypt does not forget her sister countries which stood with us, as well as the countries that stood against us" — in a clear message to Qatar, which was and remains a strong supporter of the Muslim Brotherhood.

The symbolism in this euphoric scene is unmistakable. First, the whole scene delivered a message that Egypt is not only unified, but specifically unified around its armed forces. Second, Copts — who largely suffered at the hands of Islamists, who destroyed nearly 85 churches and properties as well as killing a number of Christians — will no longer be marginalized, as the issue of sectarianism is at the heart of the government's priorities. Third, and most importantly, a new status quo has been set up in Egypt.

This status quo represents an unprecedented level of reconciliation between Egyptians and their government. Whereas some observers characterize Egypt as highly polarized at the moment, polarization presumes there are two strong counterparts (Army and Islamists). This was the situation before Mohammed Morsi's presidency. In the current situation, however, the street is almost in a state of consensus over the figure of el-Sisi and hatred towards the Muslim Brotherhood — namely after Morsi’s failure and the terrorist attacks that followed his ouster.

The seal of this unity is not a satisfaction based on a good governmental performance, but rather a stronger one; a nationalistic cult consumed in, and guaranteed by, the figure of el-Sisi whose image can be found in ﻿almost every street in Egypt.

The recapitulation of Egyptian history by el-Sisi was aimed at accommodating to a nostalgic feeling spread amongst the frustrated public, who no longer believes in the Arab Spring which brought the Muslim Brotherhood into power. The restoration of Egypt’s post-1952 legacy of Egyptian nationalism was a reversal process subverting "the bats of darkness," ﻿over whom el-Sisi enjoyed a victory on June 30 — the start of mass protests against Morsi.

The Restoration of the First Republic

The main agenda of Morsi's government and the different political factions involved in the political scene was to build "the second republic" which was prepared for since January 25, 2011, and launched amid Morsi's persistent criticism of all Egyptian presidents since the "first republic (1952-2011). In the 2012 celebrations of the October War, Morsi gave a different presentation in which he excluded Sadat's wife and instead seated Tareq al-Zumour, who was involved in the plot of Sadat's assassination, beside him.

Morsi's final speech explained how he inherited a suffering country from the first republic, one in which Nasser turned the state’s welfare into debt and how since then crises accumulated. Supported by the existence of an ideological gap in the post-January 25 era left by leftists and Islamists who both endeavored to deconstruct the legacy of the first republic, Morsi seized the opportunity and paved the way for a new set of religious principles coined by constitutional articles. An example of this was the inclusion of Article 219 that defined "the principles of Islamic Shari'a" of the second article – which determined Islam as the religion of the state – according to the Salafist view of legislation.

This came amid the endless speeches by the Muslim Brotherhood about restoring the dream of the Caliphate, which was ended by the 1952 Revolution when King Farouk — who had plans to revive the Caliphate — was forced to abdicate by the Free Officers Movement. Leftists, including the novelist Alaa al-Aswani, the famous satirist Bassem Youssef and January 25 youth figures, did not call for the ouster of Morsi but were in favor of him to continue his four-year term, despite their criticism of his administrative failure.

The so-called "silent majority," which showed its powerful momentum in reaching nearly 50 percent of votes for the ex-army figure Ahmed Shafiq in the 2012 presidential election, realized the new character of the growing second republic with its increasingly Islamist outlook — one that stood in stark contrast to Egypt's post-1952 ideological and religious legacy.

The need for the restoration of what was seen by many as the country’s genuine identity, boosted by the unpleasant harvest of the Arab Spring, became the main power behind the largest demonstrations in the history of Egypt. These events marked the end of the second republic ﻿at the hands of el-Sisi; a man whose shoulders bear the legacy of the first republic, with its greatest achievements such as October War and ﻿its most bitter lessons.

The Borderline Between the Two Republics

This year’s celebrations of the October War implied an ideological borderline dividing the second and first republics. Whereas the second republic did not only consist of Islamists but also those who were not necessarily against a religiously oriented system of government and thus tolerated this strong Islamist presence, the first republic formed the bedrock of identity for generations of Egyptians.

Despite the fact that Mohammed el-Baradei and others appealed to the armed forces to oust Morsi eventually, they remained within the borders of the second republic of January 25 — a key reason of why they are publicly rejected today.

El-Baradei’s and el-Sisi’s differing opinions could be seen in their interviews given to the Washington Post at the same time.

El-Baradei explained the problem of Morsi's regime in terms of administrative failure that dragged Egypt to a dreadful economic situation. At the same time, el-Sisi, who wrote an essay arguing against fundamentalist ideologies during his studies in the US, explained ﻿that the ﻿basis of his decisions was ideological. According to him, the Muslim Brotherhood's ultimate affiliation is to a Caliphate, with Egypt as a nation state being less of a priority — something which is unacceptable to el-Sisi.

This simply explains how the new status quo in Egypt is not entirely new but is ultimately different in its core, as it is not a reaction to failed governance but instead to the very principles of the January 25 uprisings, which welcomed the Muslim Brotherhood and entrusted them with the construction of the second republic. This is precisely what lies behind the symbolism of ﻿the October War celebrations.