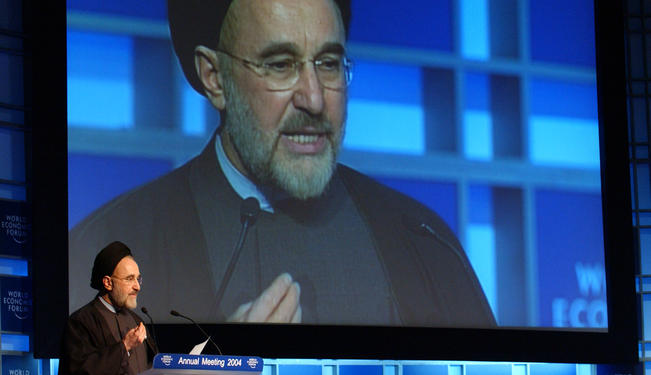 Khatami's non-confrontational stance towards Ayatollah Khamenei serves as part of his grand-strategy for a political comeback.

Mohammed Khatami has once again taken a backseat in Iranian politics. The former (and only) reformist president from 1997-2005 has, for the second election in a row, rejected a presidential candidacy. The public sentiment toward Khatami is split among liberals. While some believe that a second Khatami presidency could usher in a new era of social and political reforms, others perceive him as being too weak and unwilling to actually challenge the hardliner-establishment and supreme leader. Both groups, however, are undoubtedly disappointed with Khatami and his political reservation to speak out against the seemingly authoritarian rule developing in Iran.

Khatami’s passiveness and distance from the political arena should be seen as strategic and necessary for a successful political comeback. The reformist leader understands better than most the rigidness of the Iranian political structure and the power of the ruling elites. While other reform-minded leaders and activists have become increasingly vocal over the past eight years against the growing violations toward human rights and rule of law, Khatami has been relatively silent. Instead, since the end of his presidency, Khatami has focused on promoting civil society and the idea of a democracy that maintained Iran’s Islamic character, or an Islamic democracy, to the masses. Additionally, he has avoided playing a prominent role in demonstrations against the government, including the 2009 Green Movement. His actions, however, should not be perceived as being cowardly — but instead pragmatic.

Iranians experienced a brief illusion of openness under Khatami that they would never witness again. As president, his first initiatives included enacting political reforms that historically had been suppressed. He relaxed press laws and lifted restrictions on the creation of organizations that led to the proliferation of newspapers and political associations. For the first time in decades, Iranians were able to politically express themselves without fear of government reprisals. It was short-lived, however. Only two years after Khatami’s inauguration, the conservative-dominated parliament in 1999 reversed most of the reforms once they realized the new political openness threatened their own power.

The government-ordered closure of the popular reformist newspaper, Salam, sparked outrage among the public that led students from Tehran University to take to the streets in what became the largest demonstration since the 1979 Revolution. The supreme leader, Ali Khamenei, the most powerful figure in the Iranian government unleashed a brutal crackdown on the students that led to multiple deaths and mass arrests. Instead of condemning the political suppression, Khatami sided with Khamenei. The image of Khatami shaking the hand of Ayatollah Khamenei after what became known as the “18th of Tir Crisis” has been carved in the memories of Iranians as marking Khatami’s “betrayal” of the public.

Since the end of his second presidential term, Khatami has largely distanced himself from politics. He surprised many by entering the presidential race in 2009, but withdrew shortly after former prime minister, and fellow reformist Mir-Hossein Mousavi announced his candidacy. Mehdi Karroubi, who had been chairman of the Majles under Khatami, was also running. Only three hours after the closure of the last polling station, the Interior Ministry, usually taking days, announced the results that gave Mahmoud Ahmadinejad 60% of the votes, and Mousavi a mere 34%. Outraged, and frustrated with the apparent ballot-rigging, Iranians took to the street throughout the country to protest the results. Karroubi and Mousavi became the de-facto leaders of the Green Movement, while Khatami remained in the shadows.

In 2011, both Mousavi and Karroubi were put under house arrest for trying to revive the Green Movement by calling Iranians to support the Arab Spring. Their imprisonment left Khatami as the only viable candidate from the reform movement. He chose not to run. Instead, after meeting with his predecessor, Akbar Hasemi-Rafsanjani, Khatami decided to throw his support behind the centrist and encouraged his own supporters to back Rafsanjani. It was to little avail; the Guardian Council, which vets all candidates, disqualified Rafsanjani from the race. With the exclusion of Rafsanjani, and Khatami stepping aside, virtually no major reform or liberal candidate will be contending for the presidential seat, practically guaranteeing the presidency to a supreme leader loyalist. Many Iranians, especially Khatami’s most ardent supporters, erroneously put the blame on him for not ushering a reformist political comeback at a time when they feel they need it the most.

Contrary to widespread belief, Khatami has not given up on the reform movement. While his passiveness toward oppressive policies and inactivity in the popular uprisings throughout the past decade has invited people to accuse him of being a “mock-reformist,” and part of the “establishment,” there is a logic behind his actions. The “Smiling Seyyed” is seeking a political comeback. But as the last major reform leader left and not already imprisoned, he must tread especially careful to ensure the survival of the reform movement.

Staying removed from public demonstrations has actually been crucial for Khatami’s survival. During the 18th of Tir Crisis in 1999, the supreme leader’s military wing, the Islamic Revolutionary Guards Corps, gave the then-president an ultimatum: either condemn and stop the demonstrations, or be overthrown. The presidency was the only position left not under the control of the supreme leader, who had by then virtually monopolized most political power inside of Iran. Khatami felt that he had no choice but to allow for the crackdown in order to safeguard the last democratically-elected post. Similarly, in 2009, Khatami played a limited role in the Green Movement because he understood that it would give the hard-line government an excuse to imprison him. He was right. Mousavi and Karroubi, the leaders of the movement, have been imprisoned for two years, and barred from participating in politics.

Khatami’s position against public demonstrations is pragmatic. Whenever there have been demonstrations and uprisings in Iran, they have typically been resolved by violence and the elimination of opponents, which has resulted in an even more closed society and authoritarianism. Change is unlikely to come from civilian pressure that is typically powerless in the face of an unbalanced political structure where most of the power rests with the unelected institutions like the Guardian Council and the Judiciary that are beholden to the supreme leader himself. For as long as the Iranian government continues to rule as repressively as it does, it only undermines its own legitimacy. However, when a popular uprising challenges its rule, it legitimizes the regime’s oppressive actions because they can claim they need to protect the “Islamic principles” of the 1979 Revolution. Public demonstrations, therefore, may actually jeopardize the reform movement. Instead of confronting the government, Khatami believes that change should happen “through a process of democratic decentralization” over time. Popularizing civil society and the idea of an Islamic democracy, Khatami contends, are the first steps in moving along this process.

Staying on the Good Side

Promoting civil society and an Islamic democracy have been essential to Khatami’s strategy of transforming the political consciousness of Iranians, while staying on the good-side of the supreme leader. Promoting an Islamic democracy was the perfect solution to appeal to the majority of Iranians, while at the same time convincing the ruling elites that he was not seeking to secularize Iran.

While many reformists advocate for a secular democracy that mirror western states, Khatami refuses to stray from the Islamic principles of the 1979 Revolution that overthrew the western-backed Shah. Instead of fitting Iran around a western framework of democracy, he believes in fitting democracy around Iran that is inherently Islamic. Pushing for an Islamic democracy was key for appealing to rural Iran and the bazaaris, who have traditionally been more wary of the west. In addition, for as long as Khatami defends Islam, the supreme leader cannot accuse him of being an agent of the west.

Khatami also believes in the continuance of the evolution of civil society that would, as reformist strategist Said Hajjarian envisions, “transfor[m] the political climate to the point that our opponents feel obligated to adopt our vocabulary, referring to the supremacy of the law, pluralism, and respect for human rights.” The current political structure in Iran is unsustainable in the long-run, as long as the political consciousness of Iranian society continues to change.

Political power in Iran is more centralized than ever, and Khatami truly believes he would be unable to make any progress as part of the government at this time. The mindset is the same as in 2009: if he ran and won the election, he would need to challenge the supreme leader’s rule in order to enact fundamental reforms and safeguard the rule of law. However, it is unlikely that Ayatollah Khamenei would tolerate such disobedience. If he failed to reform the government, Khatami would lose public support and that would delegitimize his efforts, and effectively end his political career.

Khatami's decision not to run in this year’s election highlights his grand strategy to reform Iran: allow civil society and the idea of an Islamic democracy to grow, wait for factionalized politics in government to weaken support for the supreme leader among his own power base, and ultimately let the Islamic regime continue to be delegitimized in the eyes of its own people to the point of no recovery. Then, and only then, will Khatami re-enter government and lead Iran to a process of decentralization of power, and democratization.