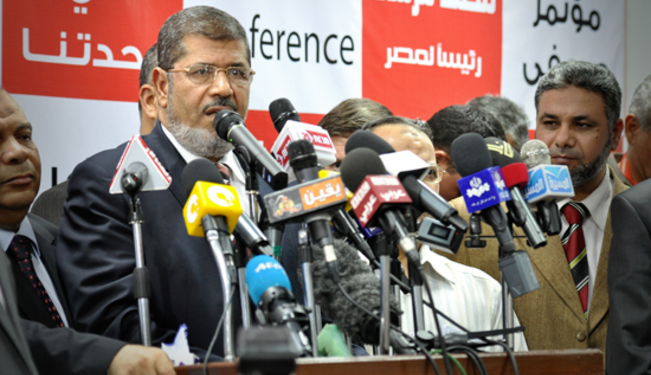 Popular checks will make a comeback in Egypt. This is the last of a two part series. Read part one here.

The brief history of the Muslim Brotherhood discussed in part one, gives us some context as we try to understand Egyptians’ feelings as they took to the streets on June 30.

I was in Egypt shortly after these events and went to the rallies that General Sisi called to gather a mandate to “deal with terrorism,” where I interviewed dozens of people over 12 hours.

There has been some dispute over the size of the crowds in support of the uprising against Morsi’s government. I dismiss most of this as unconvincing. This analysis is based on the assumption that Tahrir Square was only filled once, ignoring that people milled in and out throughout the day, and ignores other squares and neighborhoods as well as other parts of Egypt.

Remember, there was no major opposition to Morsi when he first took power in 2012; and the many who were not inclined to vote for the former president did so anyway, as his opponent, Ahmed Shafiq, was a member of the old regime. Despite the extraordinary weakness of Shafiq, Morsi only won by 1.3 percent of the vote.

Egyptians entrusted Morsi with the revolution and, one year later, they had deemed their trust soundly misplaced. Some cite the nefarious Egyptian media to explain this dramatic loss of public trust, but the fact of the matter is that the only difference in media before and after June 30, 2012, is that the Islamists now had their own channels.

This is not to say the Egyptian media is accurate or professional: it is very often neither. But to explain Egyptians’ deep distrust and discontent with the Muslim Brotherhood by claiming a mass media delusion while ignoring Egyptians’ lived history, is conspiratorial and inaccurate.

In retrospect, the Muslim Brotherhood should not have run a presidential candidate, as they originally promised. Morsi’s cabinet was full of Mubarak’s men – reflecting a clear strategy to share power with those already in power, including the military and members of the old regime.

Beyond the makeup of the cabinet, concerns that Morsi reported back to the unelected murshid (supreme leader) of the Brotherhood were valid; which meant his true inner-circle was made up of the tightly hierarchized Muslim Brotherhood leadership.

This kind of rule by an unaccountable oligarchy was certainly not what the revolution was about, nor was it about fomenting sectarianism, or handing the country over to a closed group with a non-transparent agenda.

But most egregiously, many Egyptians perceived the Morsi government to have lost its legitimacy after the November 2012 constitutional decrees, which placed Morsi above judicial review and was followed by a very rushed referendum for a deeply-flawed, Islamist-dominated constitution.

Those who attended the pro-Sisi rallies truly believed Egypt had been rescued from the brink of disaster. I detected palpable relief, as if people were exhaling at long last. ”We stayed quiet,” they said, “until we could not take it anymore and were going to explode. We love our country!” As someone put it to me: “Imagine if you came to rule Egypt, but you only spoke English, and only spoke to your American friends. That is what Morsi did to Egyptians — he didn’t talk to us! He ignored us and talked only to his group.”

They would cringe, I was told, when Morsi addressed (his) audiences as, “Ahli wa Ashiiraati” (my family and my tribe). This is an ancient address for tribe — the classical Arabic use is often in connection with Arabian tribes of the pre-Islamic/early Islamic period — when addressing people, as opposed to Nasser, who would say: “Aayuha al-ikhwaa il-muwaatinuun” (oh my brothers and fellow citizens). In addition, Egyptians were insulted that their religiosity and Islamic theology and practice had been questioned by people who seem to think they are better Muslims, and thus better people than them.

Most importantly, the Muslim Brotherhood disrupted and disturbed what many people called “the Egyptian identity.”

”Our heritage, our gentleness, our openness, our tolerance,” I was told, “it’s like they do not like the Egyptian nature.” In a context where people are suffering economically, identity is the one thing you cannot touch. One person said to me, “it’s all we have.”

Official western discourse is fixated on elections — reading the events starting on June 30 as a major setback for democracy. Since this concern is not important to the majority of Egyptians at present, the larger question becomes: Do or should people, who are going through democratic transitions, bend to this model? Or should the aggregate model amend itself to reflect the complex Egyptian example?

The Egyptian military must be watched closely and checked on its many abuses. Keeping in mind that the same Egyptian population revolted against this very same military regime a mere two years ago, I think there is a strong chance significant popular checks will be back in place in the coming months.

Egyptians, who instinctually felt the revolution would not be respected and advanced under a Morsi regime, have spoken loudly and clearly. It is certainly possible to call this a form of democracy. But the larger point now is that most Egyptians do not care about the nomenclature, and consider this an irrelevant and even naive western-based discussion.