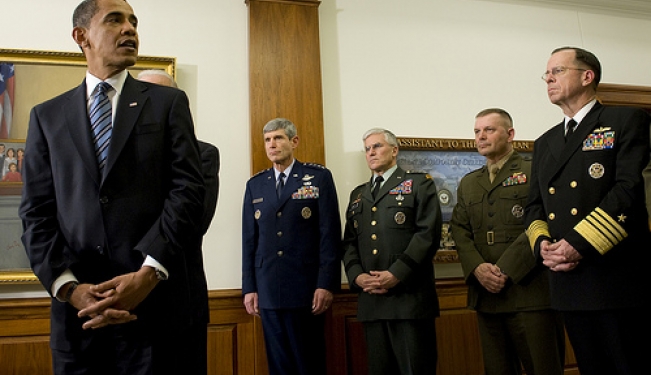 Backed by Israel, it's the only foreign policy issue that unites the GOP.

The rise of the Arab masses has pushed Iran out of the headlines — for now. Even Mahmoud Ahmadinejad, whose theatrics rarely pass unnoticed, has lately failed to grab the attention of the U.S. media. America's attention has instead turned toward Egypt, Syria and Libya.

This is likely to change in the next few months. Not as a result of any particular developments in Iran or between the United States and Iran, but because of the 2012 presidential elections. As the Republican presidential hopefuls turn their criticism toward President Obama and not each other, Iran will likely be one of the few foreign policy issues the Republicans will pursue.

Though their campaigns will center on the economy, there are four factors that will drive the GOP to make Iran one of its main foreign policy issues.

First, Iran unites all factions of the Republican Party (save the Ron Paul contingent) at a time when all other major foreign policy issues tend to divide them. For instance, the Republicans have been all over the map on the most important foreign policy development of the year: the Arab Spring.

Former Arkansas Gov. Mike Huckabee criticized Obama for not standing by Egyptian dictator Hosni Mubarak, for instance, while others argued that Obama had been too slow in supporting the demonstrators. The Republican fault lines were even clearer on Obama's intervention in Libya.

On Iran, however, there is unity. The Republican remedy is simply to up the ante and get tougher — no matter what. Whatever hawkish line Obama adopts, the Republicans will find a way to "outhawk" him. As the memory of the Iraq invasion slowly fades away, Republican strategists calculate, the American public will return to rewarding toughness over wisdom at the ballot boxes.

Second, just as Iran unites the Republicans, it divides the Democrats. As I describe in my forthcoming book on Obama's Iran diplomacy, "A Single Roll of the Dice," part of the reason Obama's engagement with Iran was so short-lived (beyond all the challenges the Iranians themselves presented) was the pressure he faced early on from the Democrat-controlled Congress to abandon diplomacy and pursue sanctions.

Much of it had to do with Congress' sensitivity to Israeli concerns. And much of it was a reaction to the Iranian government's brutal human rights abuses following the 2009 election debacle. As a top Obama administration official explained to me, "skepticism in Congress against our strategy turned to outright hostility" after the 2009 elections. Congress' honeymoon with Obama had not even begun before Democrats abandoned him on Iran.

Third, the Republicans believe that Iran provides an opportunity to portray Obama as weak. Glossing over the many differences between Iran, on the one hand, and Egypt, Tunisia, Syria and Libya on the other, the Republicans will accuse Obama of abandoning the Iranian people by not taking sides in the 2009 election dispute. But with the developments in the Arab world — and Obama's more interventionist response to those conflicts — the Republicans will argue (mistakenly) that a similar posture by the U.S. in 2009 would have ensured the downfall of the Iranian theocracy.

Moreover, with Iran's nuclear program progressing in spite of Obama's limited diplomacy and his crippling, indiscriminate sanctions, the Republicans will present a narrative that states that diplomacy was tried and failed, sanctions are tough but insufficient, and the only remaining option is some form of military action. Yet, Obama has been too weak to pursue that option. According to this (false) narrative, the president's weakness jeopardizes not only American interests, but also the security of Israel. This narrative, it must be noted, is not so much to provoke military action but to portray Obama as too weak to order it.

Which brings us to the fourth factor, which permeates all the others: Israel. Beyond dividing the Democrats and portraying Obama as weak, focusing on Iran also enables the Republicans to cast Obama as insensitive to Israel. From the very outset, Israel opposed Obama's diplomacy with Iran.

"We live in a neighborhood in which sometimes dialogue … is liable to be interpreted as weakness," then-Israeli foreign minister Tzipi Livni said during an interview with Israel Radio only 24 hours after congratulating President-elect Obama on his historic election victory in 2008. Asked specifically if she supported discussions between the United States and Iran, she left no room for interpretation: "The answer is no," she declared.

Once Obama took office, Israel consistently pushed back against his engagement policy by calling for artificial deadlines for diplomacy, by pushing for sanctions before talks had begun and by setting unreachable objectives for the diplomacy.

Though Obama eventually adopted the line on Iran favored by Israel, his many clashes with the Netanyahu government over this issue cast a dark shadow over U.S.-Israeli relations that likely will not be undone in time for the elections. And the Republicans are poised to exploit it. Just this week, Texas Gov. Rick Perry took a jab at Obama in an Op-Ed in the Jerusalem Post. "It was a mistake [by] President Obama to distance himself from Israel and seek engagement with the hostile regimes in Syria and Iran," Perry wrote.

Most likely, Obama will take the bait. Instead of defending his diplomacy and pointing out that no U.S. president has been closer to resolving the nuclear issue than he has, he will likely adopt the line that his limited diplomatic effort paved the way for far greater international buy-in for crippling sanctions than George W. Bush ever managed to secure.

Though this line of argument is technically correct — Obama's attempt at diplomacy helped unite the permanent members of the Security Council against Iran and prevented Tehran from taking advantage of divisions within the council -– it suffers from several weaknesses.

First, sanctions have hurt the Iranian economy and likely slowed the growth of its nuclear program, but it has not changed Tehran's strategic calculations or shifted the trajectory of the program. In short, the nuclear clock has kept ticking. This plays straight into the Republican narrative that neither Obama's diplomacy nor his sanctions have succeeded. With a few more alarmist reports by the International Atomic Energy Agency (IAEA), the White House's spin on having contained Iran will fall apart.

Second, by seeking to play up the hawkish aspects of his Iran policy, the Obama administration line permits the Republicans to set the metrics for success. However hawkish and pro-Israel the White House portrays its policy, there will always be a Republican willing to up the ante even further. If Obama permits hawkishness to be the criteria for success in the Iran debate, then he will set himself up for failure — even if he is technically right.

Democrats have failed in this game before. In the 1990s, Republicans in Congress dismissed the sanctions on Saddam Hussein's Iraq and forced President Bill Clinton to adopt additional measures, including making "regime change" official U.S. policy and providing funding for the now-disgraced Iraqi "opposition" groups through the Iraq Liberation Act of 1998. Clinton's attempts to push back against this pressure by out-hawking the Republicans only helped create a false binary choice between accepting a nuclear Saddam and taking military action. The parallels with developments with Iran today are plenty.

In spite of the Republicans' recent gains, the candidate that stands the greatest chance of defeating Obama 2012 is Obama '08. Instead of running away from his record and betraying the foreign policy values he promised to bring to the White House in 2008, Obama should restate the case for diplomacy and point out its benefits and virtues, including the superiority of diplomacy in addressing Iran's flagrant human rights violations. And point to Iraq to remind the American public of the unacceptability of failure when it comes to diplomacy.

As Israel's Deputy Foreign Minister Danny Ayalon told me recently in a sharp reminder of what the end game of the hawks is: "If diplomacy fails and the economic sanctions fail, [then] everybody understands that all options are on the table."

This article was first published at Salon on September 18, 2011