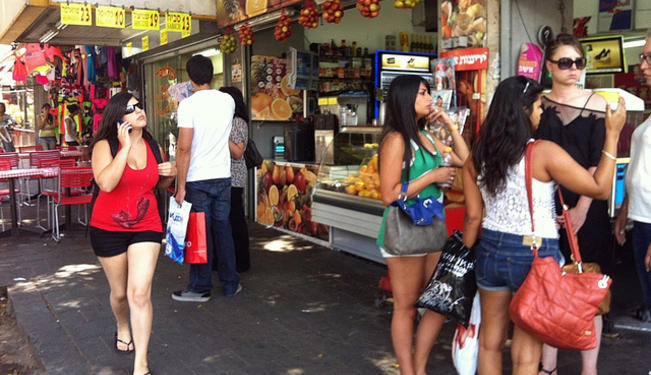 The frozen peace process with the Palestinians is not a prime topic in the upcoming Israeli elections. Daniel Isler examines the reasons for Israeli apathy towards the future of negotiations.

There is a bitter joke in Israel these days: the Israeli-Palestinian peace process is like Michael Jackson and Game Boy — a sad reminder of the naive and hopeful 1990s. The question is why has Israeli society become so apathetic to the conflict and its resolution? The belief that there is no real partner for peace on the Palestinian side, nurtured by both sides of the Israeli political map, is the main factor for such apathy. Without a partner, the individual Israeli chooses to take care of his own business – social and financial issues. This lack of interest does not seem to be changing with the upcoming elections.

Netanyahu and the Palestinians

On October 9, 2012, Israeli Prime Minister Binyamin Netanyahu announced the early end of his term, and called for elections in Israel. The move came after a few failed attempts to create a parliamentary consensus over the national budget. It marked the end of the 18th seat of the Knesset (Israeli parliament) in 64 years. As with almost every other seat, this one did not manage to last for its entire four year term. Nevertheless, this was a long, and to some extent, a stable seat.

Since Netanyahu was elected in 2009, the Israeli economy has shown signs of stability, the borders with Syria, Lebanon and the Gaza Strip have remained more or less quiet, and the prime minister seems to be in control of the religious dispute in Israeli society. This seat in the Knesset also saw massive social protests and demonstrations in Israeli streets in summer 2011, the return of the abducted soldier Gilad Shalit from Hamas, and an unstable Arab world experiencing political upheaval.

This political rollercoaster does not seem to have affected the impression of Netanyahu as a strong, uncompromising, and responsible leader in the eyes of most Israelis. This image remains dominant, and as for today, Netanyahu is expected to win the election, despite the fact that he has not made any substantial moves towards peace negotiations with the Palestinian leadership.

In fact, it appears that no major Israeli party is aiming its campaign towards the resolution of the conflict. The social-democratic party Ha-Avoda is focusing on using the social protest momentum and is talking especially about financial issues and social values. The liberal center party Kadima is fighting for its political life, and will not take on such a disputable issue. Moreover, the religious parties are involved with internal and local agendas. Moreover, new players that are starting to emerge are mainly busy criticizing the current administration. The only parties that put their full weight on the Palestinian issue are the small left-wing Meretz, and the even smaller Arab parties.

If one were to identify when the Israeli-Palestinian conflict became a loathed subject in Israel, it would probably be the assassination of Prime Minister Yitzhak Rabin in November 1995. Up until then, the idea of reaching a vital peace agreement with the Palestine Liberation Organization (PLO) under Yasser Arafat seemed realistic. The Oslo Accords were implemented during the beginning of the 1990s, and under the Clinton administration, anything seemed possible. This represented a high peak in the Israeli public’s optimism regarding the peace process. However, in the 2013 elections, it will be at a record low.

What led to this radical change? First came the loss of the father figure of Rabin as the leader of the “Pro-Peace Camp” in Israeli politics. This was followed by the 1996 win of Netanyahu (first term) and the revival of the Israeli right-wing. From this point onwards, at least until 2005, the “no partner” narrative was nurtured from both sides of the political spectrum.

The repeated peace talks in Oslo and Camp David wore down Israeli public opinion. Leaders came and went, expectations were high, but no results were visible. Netanyahu first, and Ehud Barak after him, declared that there was “no Palestinian partner” for peace and denounced Arafat as a supporter of terrorism. In May 2000, Israeli forces retreated permanently from southern Lebanon after over 18 years, but with no peace treaty and no border agreements. Impatience was high. But this ticking bomb exploded only on September, 28, 2000, when Ariel Sharon, then an Israeli Member of the Parliament, visited the Temple Mount, holy for both Jews and Muslims. The visit supposedly erupted with severe riots – ones that sparked the Second Intifada. In 2001, Sharon was elected prime minister, and continued to reiterate the “no partner” paradigm. Terrorist attacks by Palestinian organizations like Fatah and Hamas became a routine. Israel conducted large scale military operations in the Gaza Strip and the West Bank. Sharon was re-elected in 2003, leaving the Israeli left-wing smaller than ever in the Knesset. Consequently, the public lost faith in any future peace process.

A new hope was born in 2005, after the Israeli decision to “disengage” from the Gaza Strip, evacuating all settlements and military forces from it. But the violent Hamas regime, which continues to fire rockets at Israel, had made this case even more discouraging: if Gaza obtained “independence” and kept on attacking Israel, argued the skeptics, why would a peace agreement and a Palestinian state be any different? This state of mind is still common today.

Under the Obama administration, significant pressure was aimed at Netanyahu to restart peace negotiations. In 2010, after ten months of “freezing” any expansion of Israeli settlements, Netanyahu and Palestinian Authority President Mahmoud Abbas started meeting in order to revive the process, but talks soon broke down.

Pre-conditions by both sides seem to be unbridgeable: Israel demands that the Palestinians recognize Israel (without mentioning borders) as the “state of the Jewish people”. Abbas is demanding an unconditional recognition from Israel of “the right of return” for Palestinian refugees, and the immediate halt of settlements.

These demands make it impossible for the two leaders to meet, largely due to internal reasons. Abbas, perceived as a weak and non-representative leader of the Palestinians, cannot afford any declarations like these; he prefers to strengthen his image with moves like the UN recognition. On the Israeli side, Netanyahu is pulling his hands off the subject: it would be politically unwise of him to bring the ‘dead’ process into the public discourse. Polls indicate that a majority of the Israeli public want a permanent agreement and would accept a Palestinian state. Netanyahu cannot afford to offer that before the elections, however, as he will lose his traditional voters from the right. Consequently, Netanyahu and other right-wing leaders are promoting two narratives: the “no partner for peace” narrative and the “Iranian threat”.

The emphasis of the threat from Iran as Israel’s main problem, alongside focusing on financial issues — conveniently for Netanyahu — pushes the Israeli-Palestinian conflict aside. The problem is that the hawks of the Israeli political system are not the only ones disregarding talks but also the doves. Major left-wing parties, that traditionally promoted peace talks, are now avoiding any clear declarations about the conflict to prevent scaring away potential voters.

The bottom line is that the Israeli voter is not interested in the details of the conflict. For he/she, the peace talks are hopeless as there is no real representation on the Palestinian side. In the days of Rabin and Arafat, it was clear who was negotiating. Today, it appears that Abbas is further losing legitimacy in the Palestinian street. Hamas has become increasingly violent, and the US is busy with its internal issues.

Some Israeli opinion makers assume that the only thing that will shake the Israeli public from its apathy will be some kind of international intervention. However, such a move would only stir up seclusion in Israel out of fear of losing its sovereignty. One-sided moves by the Palestinians such as seeking recognition as a non-member observer state in the UN are perceived in Israel as a sign of communication breakdown; no matter how bad the communication already is. The repeated violent engagements with Hamas in Gaza are not helping the Israelis in restoring the public’s faith in a viable peace process.

One prominent option for solving the deadlock is in the hands of Israel’s neighbor from the south: the recently revolutionized Egypt. The regime change after the uprising encourages hope in Israel for a new type of relationship between the two countries. In light of the declining involvement of the Obama administration in any kind of peace process, and the high Egyptian involvement in the deal between Israel and Hamas for the return of Shalit, the new Egypt is perceived as a natural successor to the US as the main mediator for Israeli-Palestinian negotiations.

But even the optimists that wanted to hold this hope as a light at the end of the tunnel are now admitting that the new Egyptian regime is highly unlikely to be accepted as an impartial mediator by Israel. Under the control of the Muslim Brotherhood and Mohammed Morsi, Egypt is becoming increasingly anti-Israeli – at least in the eyes of the Israeli observer. With this option practically off the table, it is fair to argue that only a profound change in the Israeli and Palestinian discourse regarding future negotiations has the ability to reopen the door for any kind of peace process. Who will bring this kind of change? This is much harder to answer.