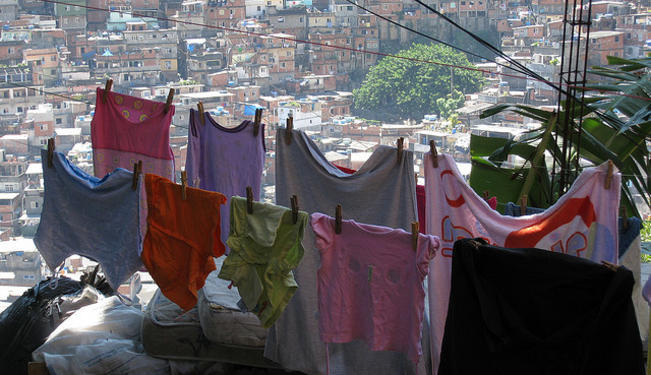 An insight about some of the elements peculiar to the realities of favelas in Brazil.

The vast majority of women who live in Rocinha, a slum in Rio de Janeiro, have their toenails painted. Different colors, shades and designs. Usually, they wear flip-flops, casual and simple clothes, and their hair tied. Almost no make-up. But the toenails are there, showing themselves to everyone. That’s a fact that only those can perceive who actually go to Rocinha, one of the most famous favelas in Brazil. This is the kind of news that media doesn’t talk about; there are no articles on papers either. It’s a detail about the community that lives there, nowadays reaching a number of almost 70 thousand people. Rocinha is not known for its painted toenails. For many many years, it was synonymous with violence and drug trafficking. However, since 2012, a Pacifying Police Unit landed there to change the perspective. Abbreviated UPP, in Portuguese, its task is reclaiming territories, more commonly favelas, which are controlled by gangs of drug dealers. By 2014, the government of Rio de Janeiro wants to have 40 UPP’s installed in the city. For Rocinha, this measure meant that it is nowadays a peaceful neighborhood, open to anyone willing to visit it.

However, besides some curious tourists who go there, Rocinha remains a vast unknown place to most of the ‘cariocas’ – the residents of the city. Unfortunately, the prejudice against poor neighborhoods in general does not exist exclusively in Rio de Janeiro, but in all Brazil. Why do people fear places they don’t know? Rocinha was a violent place, but not all peripheries are. How can we, as a society, resolve this problem? Like many developing countries, Brazil has its mega cities, with millions of inhabitants struggling to work, to move, to live. Therefore, the main goal today is not to develop more cities, but to find a way to integrate the people who live there and destroy the invisible wall between the rich and poor. In 2011, it was reported that a new subway station was going to be built in Higienópolis, a rich neighborhood in São Paulo, known for its conservative residents. Back then, during an interview for television, a resident of the neighborhood made an unfortunate statement, claiming that the new subway station would bring "homeless and different people" to the region. A few days later, the statement went viral, and through social networks people organized a barbecue called “Barbecue of Different People” in front of the mall in Higienópolis, near where the suppose subway station was going to be.

Following this path, Higienópolis can be compared to Georgetown, in Washington, D.C.: a beautiful, charming neighborhood, full of great places to visit, go shopping and eat, but a neighborhood that chose not to have a metro station nearby.

The lack of a public transportation of quality is an important issue to integrate people who live in big cities. You can provide health care, safety and cultural activities for the population, but if you don’t provide transportation, you impede the right of people coming and going. In the same way upper and middle class don’t go to suburbs, lower class don’t go to rich neighborhoods either – unless if it’s for working. Therefore, you can find many doormen that live in the buildings and condominiums where they work in Leblon, for example, a rich neighborhood in Rio. But once you ask them if they know the best restaurants there, or if they go to the beaches nearby, the majority would answer with a big ‘No’.

Similar prejudice exists between cities, states and countries. Brazilian southeast versus Brazilian Northeast and Mexico versus Guatemala are two examples in Latin America. Within the United States we find a North versus South and a West versus East rivalry. How do we break these walls? How can we integrate people, neighborhoods, cities? How can we show that poor neighborhoods are worth visiting in the same way as rich neighborhoods are? There is not one right question. The way people see their cities was built over years, and it’s hard to change it. It would be even harder to transform every neighborhood in a rich place. One possible solution would be to change the perception of periphery and center. The center should be where everyone lives and works – everyone just live in the center of its own periphery.