Two American men have been detained by the Venezuelan military following “a botched beach landing in the fishing village of Chuao,” the Associated Press reports. They were reportedly attempting to invade Venezuela and capture President Nicolas Maduro, apparently as a prelude to installing America’s favorite unelected president, Juan Guaido, as the new head of state. Both of the captured men were former US Special Forces soldiers currently employed by Silvercorp, a Florida-based private security firm, founded by ex-Green Beret Jordan Goudreau.

Maduro wasted no time accusing the US of being behind the attempted coup. Secretary of State Mike Pompeo wasted even less time denying it in these words: “There was no U.S. government direct involvement in this operation.”

A term used by the United States government to describe ordinary, everyday imperialistic military initiatives — including conventional war — against regimes that fail to conform to required standards of submissive behavior

Those who adhere to orthodox US economic ideology claim that private enterprise is always more efficient, effective and innovative than government. They explain that leaders in the private sector are willing to invest in actions that go beyond existing public norms to achieve goals that the government is too slow and cumbersome to achieve. This philosophy has led the US government to outsource, on an ever increasing scale, a wide range of military operations, even in wartime.

No one knows whether the US was even aware of, let alone indirectly involved in the scripting or staging of the embarrassing comedy of errors set on the coast of Venezuela. Pompeo denies involvement and so does the US surrogate, Guaido. The Associated Press reports that Guaido “again said he had nothing to do with Goudreau,” though Goudreau has produced a contract with Guaido’s signature.

Goudreau appeared in a long interview on the YouTube channel Factores Poder Television with Patricia Poleo, an award-winning journalist Venezuelan journalist based in Miami who opposes Maduro. The mercenary recounts his month-long negotiation of the contract with Juan Guaido’s organization, who committed to funding the operation. Even after Guaido’s group apparently failed to produce the funds, Goudreau decided to go ahead at his own expense. When asked why he would take the risk, he explained: “These guys have a right to fight for their country… The United States is not going to solve this problem. They’re not going to save Venezuela.”

Goudreau admitted the raid was a spectacular failure. But, sounding like US President Donald Trump proclaiming the imminent defeat of the COVID-19 virus, he added: “They haven’t yet [given up], but they’re working on it.” Demonstrating a deeper knowledge of history than Trump, he then cited the precedent of Alexander the Great’s victory in the Battle of Gaugamela, in which the outnumbered Greeks defeated the Persians on their home ground.

Goudreau expects his men to “galvanize thousands of Venezuelans, to fight for their freedom, to take country.” When asked why Guaido failed to follow through after signing the contract, he explained: “I think there’s a lot of money involved right now. If people are making money and they’re comfortable, I don’t think there’s any incentive for them to… [interrupted by the translator].” While insisting on the bravery of his own men and his wish to be personally involved in the fighting, he disparagingly describes Guaido’s people with this remark: “They’re all safe.”

Though some claim he’s simply in it for the $15–million bounty the US has offered for the capture of Maduro, Goudreau clearly wants to appear publicly as the embodiment of the ideal of the American entrepreneur, ready to deploy his hard-earned skills and take big risks to achieve a goal he believes in. He has been a “freedom fighter” all his life and he’s not about to stop now.

But even while seeking to liberate Venezuela from the despotic clutches of Maduro, he expresses mild contempt for Guaido, who is “comfortable” and “safe” and “making money.” Given the setting of Poleo’s house, from which she is broadcasting, Goudreau may have noticed that she too has her share of money and is living comfortably and safely in Miami (she fled Venezuela after being accused of complicity in the assassination of a Venezuelan prosecutor). Poleo’s comfort and rich surroundings don’t appear to bother him, however.

Secretary Pompeo may be sincere (for once) not only in denying direct involvement in the attempted coup, but in expressing his contempt for Goudreau, as he did when he pompously added: “[If] we’d have been involved, it would have gone differently.” With cutting irony, The Intercept’s Mehdi Hasan taunted the secretary of state with this: “Memo to Pompeo: Google ‘Bay of Pigs.’”

If the mercenary’s coup had succeeded, without the support of Juan Guaido or the US government, what position would the US have taken? How would the Venezuelan people have reacted? Would they welcome Guaido as their new leader and the US as their protector? Would they rejoice, as the Iraqis were supposed to have done, at their liberation? As Mehdi Hasan suggests, for Mike Pompeo and Donald Trump, the Venezuelan people simply aren’t as important as Venezuela’s oil reserves.

Back in January 2019, in what could be seen as an attempt to prove that critics of the Bush administration were right to complain that the invasion of Iraq in 2003 was “all about the oil,” Trump’s then-national security adviser and George W. Bush’s former UN ambassador, John Bolton, elaborated on the real motive for overthrowing Maduro. “It will make a big difference to the United States economically if we could have American oil companies really invest in and produce the oil capabilities in Venezuela,” he said. According to former FBI Director Andrew McCabe, at an intelligence briefing in July 2017, Trump himself “asked why the US wasn’t at war with Venezuela, noting that ‘they have all that oil and they’re right on our back door.’”

The US has already tried through various means to overthrow two populist Venezuelan presidents — first, Hugo Chavez and now Nicolas Maduro — by conventional means. It has consistently failed. For 60 years, US governments had attempted the same strategy with Fidel Castro’s Cuba. All those attempts failed. Will there come a point when they realize that it doesn’t work? That may, in fact, be the wrong question to ask because in one very real sense it has worked, and in ways that appear more effective than the nation’s direct involvement in the Middle East.

The fiasco of the Bay of Pigs invasion in 1961 on the coast of Cuba was the last act of “direct involvement” of the US on the American continent. It left scars that would never heal, one of which may well have been the assassination of President John F. Kennedy in 1963.

The lesson learned from the failed Bay of Pigs invasion would guide all future action in the Americas. The new wisdom could be compared to that of a venture capitalist. It consists of supporting random actions by unsavory politicians, ambitious military leaders and influencers who are willing to take a risk. Most of those actions will fail, but a few will succeed and all will contribute to chaos. Even if they fail, blame will be placed on local operators and the US will appear as a neutral outside observer.

The US does covet Venezuela’s oil, but not to own it or control its production. The primary goal is to prevent an independent Venezuelan government from profiting freely from it. After all, the US is now a net exporter of oil. The secondary goal is to enrich US petroleum companies and financial giants who, it so happens, fund political campaigns at home. Ideally, a Venezuelan government that is a puppet to the US will help consolidate Washington’s control of the entire continental economy. Guaido has been chosen for that role, which is why he was invited to Trump’s State of the Union address earlier this year and applauded by the entire Congress.

The answer to Trump’s question about why the US is not at war with Venezuela: Who needs war when carefully maintained confusion alone gets the job done? 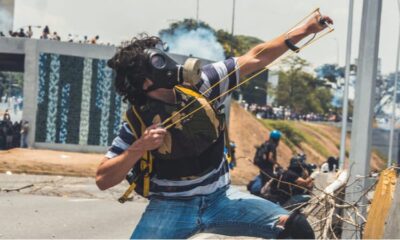 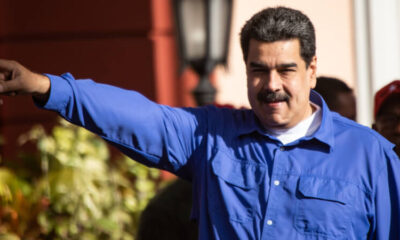 In What Seems Like an Endless Nightmare, Maduro Clings on to Power