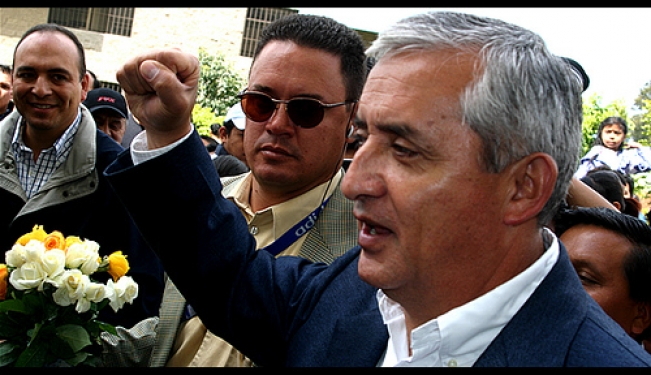 Analysis on the election of a new president in Gautemala, and what this means for the country.

On November 6, Otto Peréz-Molina was voted Guatemala’s next president, making him the first military man to lead the country since 1986, the year the nation became reacquainted with democracy after decades of dictatorship. A prominent military figure in the 1980s and 1990s, he was active during the bloodiest period of the thirty-six year civil conflict that left some 200,000 people dead.

Peréz has been accused of genocide and serious human rights violations on numerous occasions. Frankly, it is hard to believe that a man as powerful as Peréz knew nothing or did nothing as it relates to the atrocities committed against indigenous Guatemalans from 1960 to 1996.

Furthermore, the bipartisan Historical Clarification Commission (Guatemala’s post-conflict truth and reconciliation commission), found that no less than 93 percent of human rights violations committed during the war had been perpetrated by the military, a damning statistic.

This year, Pérez has been the heavy favorite all along. In September many people were surprised when he did not capture the 50% needed to preclude a runoff. Clearly, Peréz’s campaign slogan, “mano dura,” has resonated with the electorate. According to the former general, this simple saying means “zero tolerance for violence and crime.”

For many, Perez’s rise is hard to understand. But after looking at the country’s literacy rate, crime statistics and recent history of drug trafficking, his ascension makes more sense. Guatemala is an absolute disaster when it comes to organized crime and drug trafficking. In 2010, the nation had one of the highest homicide rates in the world, with over 40 murders per 100,000 inhabitants. To put this in perspective the homicide rate in the US was less than 5 per 100,000. In Mexico it was 14 per 100,000. Statistics vary, but the homicide rate in Guatemala City, the capital, is far more alarming. That number is currently around 110 homicides per 100,000 people. In spite of all this bloodshed, the prosecution rate sits at 2 to 3 percent. Widespread impunity has become institutionalized.

The danger of a Peréz presidency, and suspicion of many, is that he will roll back human rights and civil liberties once he gets into office. Fixing Guatemala’s security problems is not going to be easy. And it is unclear whether the man’s current strategy is even practicable. Trying attempts at police reform and getting the military more involved are not exactly proven recipes for success. Just take a look at what has happened in Mexico since Felipe Calderón took office.

The saddest thing about all of this is that, even though there are huge problems that the nation must confront, drugs and violence get a lot more attention than unsexy subjects like illiteracy, poverty, an inefficient tax regime, income inequality and malnutrition—all of which are significant issues in Guatemala. According to The Economist, last year Guatemalan central government spending accounted for 13.7 % of GDP, the lowest rate in Latin America. Right now it’s hard for the government to spend any more than it currently does on social programs because it does such a poor job of collecting taxes. This is an enormous challenge and should perhaps sit at the top of any reform agenda.

Regarding socioeconomic indicators, Guatemala’s indigenous Mayan population (approximately two-thirds of nation of 14 million people) is clearly suffering the most. Unfortunately, these people are virtually voiceless when it comes to national politics.

What the incoming administration (and the rest the country) must realize is that improving the country’s security situation and addressing socioeconomic inequalities are not mutually exclusive goals. Both topics should be dealt with simultaneously. First, failing to address alarming levels of poverty is morally indefensible. Second, poverty and crime are at least loosely connected. People need to stop looking at them as unrelated imbroglios.

Getting elected is one thing, governing wisely is another. As mentioned, President-elect Peréz is a proven leader who knows how to get things done, whatever the cost. The question is whether he has the political will to embrace meaningful reforms outside of cleaning up the police, cracking down on violent crime and dealing with the flow of illegal drugs. Given his checkered past, there is just too much evidence that suggests Peréz is a man who cannot be trusted, now or ever.

He will probably ignore the country’s disturbing socioeconomic indicators, shy away from real debate about his nation’s pathetic tax regime and downplay the importance of human rights. If this happens, he will be yet another Guatemalan president who has failed to lead a country that has so clearly lost its way.

*[This article was first published in The Morningside Post.]