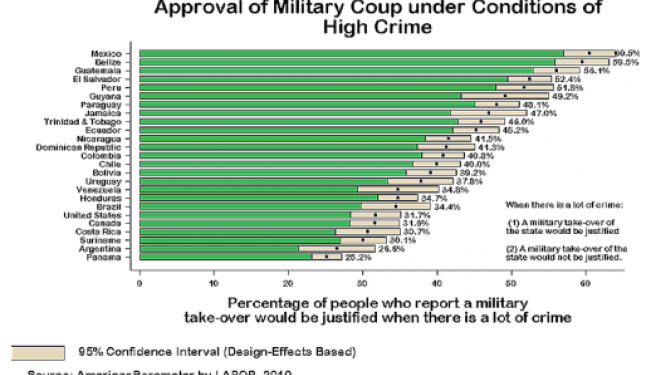 Mexican officials recently announced that the drug war’s death toll stood at 34,612, a figure that, truth be told, is probably an underestimate.  While daily body counts and official homicide rates routinely make the headlines, statistics of a different sort may soon be cause for concern. It is not just the homicide rate, as appalling as it is, that we should be worried about but also a growing distrust in the government.Survey results show that crime and corruption have a deleterious effect on the government’s legitimacy. Though Mexican officials, with some American assistance, have made advances, Mexicans will continue to lose faith in their government if it does not make progress against cartel violence and the corruption that enables it.

Organized crime has long been a problem in Mexico, fed by the nation’s weak rule of law and proximity to the United States. Past presidents have had their skirmishes with the cartels, but it was not until 2006 when Felipe Calderon, the newly elected president, waged war. The violence, mostly localized to a few hotspots, has only escalated and overall progress in reducing the flow of drugs and the power of cartels has been slow. Some have questioned the country’s ability to control the conflict. Survey results released by the National Institute of Statistics and Geography, a Mexican governmental agency, show that a majority of citizens are more afraid today than they were one year ago and that many believe the situation will get worse. The United States has some serious concerns as well, as a 2009 Pentagon report and the latest dump of WikiLeaks cables have manifested.

To help combat the cartels the United States fashioned the Merida Initiative, a 1.5 billion dollar cooperation and assistance agreement modeled after a similar program in Colombia. Initially, the plan was purely focused on fancy accoutrement, such as helicopters and x-ray machines, and less on training, intelligence and technical expertise, which made for slow progress. By the end of 2010, however, the program had assisted in taking down a number of cartel kingpins, trained over 6,700 Federal Police officers and 3,000 prosecutors and judicial authorities, and focused on improving the notoriously poor prisons, as per the US State Department. On January 6th, Arturo Valenzuela, the US Assistant Secretary of State, remarked that Merida was now going “to help institutionalize justice sector reforms to sustain the rule of law and respect for human rights – and build a stronger institutional basis for combating the drug trade.” Still, despite real advances, many police officers—poorly paid, trained and organized, and caught between bribes and threats—are corrupt and undeterred by the government’s weak effort to sack crooked cops. Furthermore, the web of different jurisdictions and levels of government control make it difficult to implement reforms and easy for cartels displaced from one area to set up shop in another. Mostly using guns from the United States, and men hired from marginalized segments of society, cartels seem to be in no short supply of either firepower or labor and are killing more people than ever. According to one Pew research poll, although Mexicans support using the military to fight drug trafficking by numbers of four to one, only slightly more than half of them believe that the army is making any progress.

Progress is a tricky thing to measure.  Research from the Latin American Public Opinion Project (LAPOP), a survey center at Vanderbilt University, is one tool used by the State Department and the Government Accountability Office to assess democratic values, political behavior, tolerance, crime, corruption, and attitudes towards government and institutions. The 2010 Mexico survey, released January 28th, shows that despite the economic crisis and drug war, citizens generally still believe in democracy. However, they are increasingly dissatisfied with their country’s version of democracy and are frustrated with rising crime and corruption. Some 90% believe that violence is a threat to the country’s future. Among the 26 nations that LAPOP surveys, Mexico has the sixth highest rate of crime victimization; only Haiti ranks worse in terms of the percentage of respondents victimized by corruption in 2009. A troubling 60% of Mexicans would support a military coup under conditions of high crime (see graphic). This may be because the majority of respondents (72%) trust the military, whereas only 36% trust the police and still fewer trust political parties. Mexicans want a more professional police force and a stronger rule of law. A clear majority supports the rule of law (61%) and does not believe that police officers should act on the margins of the law, even to catch criminals. Moreover, according to the data, crime and corruption do not appear to be determinants for support of the rule of law.

On the other hand, according to the survey, crime and corruption are determinants of “system support”, which is essentially a respondent’s belief in fair court trials, respect for basic political institutions, faith that citizens’ rights are protected, pride in the country, and support for the political system. If Mexican officials cannot clamp down on the violence and corruption, it will be at the expense of system support. Mexican officials not only have to lower the homicide rate, but also raise citizens’ trust in basic institutions like the police. This is easier said than done.