On February 3, Prime Minister Boris Johnson laid bare his long-awaited vision of a “global Britain” in a world after Brexit. Speaking amidst the imperial grandeur of Old Royal Naval College in Greenwich, Johnson’s message was that the United Kingdom, liberated from the straitjacket of EU membership, would be free to carve out a confident, dynamic and outward-looking role on the world stage in a post-Brexit era — even as the first handful of COVID-19 infections took root on British soil.

Six months and a global pandemic later, Britain faces the unique and unprecedented challenge of redefining its place in a world that is in the midst of a historic watershed moment. The COVID-19 pandemic has served as a catalyst for deep-rooted trends that have long been evident to politicians, policymakers and analysts alike — none more so than the tectonic shift in the globe’s geopolitical center of gravity from West to East.

Whether it be China’s much-publicized “wolf-warrior” diplomacy against states criticizing its initial response to the outbreak, or the initial success of East Asian states in confronting the pandemic using artificial intelligence and digital surveillance, COVID-19 has shown that the much-hyped “Asian century” is not merely a future prognosis but a present-day reality.

Brexit Britain on the World Stage

If the pandemic has served to boost Asia’s image on the world stage, the opposite is true for Brexit Britain. The UK’s bumbling response to the COVID-19 crisis has confirmed many of the suspicions of ill-placed grandeur held in foreign capitals since the referendum to leave the European Union in 2016.

Despite Johnson’s boastful confidence in Britain’s “world-beating” response to the novel coronavirus (which causes the COVID-19 disease), fatal early errors by the government — notably the initial refusal to enforce a lockdown in a forlorn effort to preserve the economy — have resulted in Britain suffering the worst of both worlds. Not only is the UK facing one of the highest per-capita death rates and the worst economic fallout as a result of COVID-19 in the developed world, but the situation has been exacerbated by the looming threat of no post-Brexit trade deal being agreed with the EU by the end of 2020.

In this context, a global Britain’s success in navigating the increasingly volatile “new normal” of the post-pandemic geopolitical order will hinge more than ever on the government’s ability to leverage ties with partners old and new across the Asian continent.

Johnson’s vision of a buccaneering global Britain on the world stage is fundamentally predicated upon two core pillars: trade and security. Whitehall is acutely aware that Britain’s ability to harness the ascendance of Asia’s emerging powerhouses hinges upon striking a fragile balance between these two, often inconsistent, objectives.

On one hand, Britain’s strategic planners look hungrily toward contemporary geopolitical hotspots like the South China Sea as testing grounds for a new forceful security footprint in the Indo-Pacific region. Britain’s armed forces already possess a string of strategic outposts, from the Brunei-based Gurkha garrison to Royal Naval logistical hubs in Singapore and Diego Garcia. The recently formed UK Defence Staff (Asia Pacific) has outlined plans for a further base in Southeast Asia in a bid to affirm Britain’s commitment to upholding the regional security architecture.

In a symbolic gesture, the scheduled deployment of the Royal Navy’s brand new state-of-the-art aircraft carrier, HMS Queen Elizabeth, to conduct “freedom of navigation” patrols in the disputed South China Sea during 2021 is indicative of a wholesale rejection of the strategic retrenchment from east of Suez that has typified British security policy in the Indo-Pacific since the 1960s.

Nevertheless, such grandiose ambitions of a more assertive military and diplomatic footprint in Asia do not come without their costs. Given China’s increasingly assertive posture on the international stage since the outbreak of COVID-19, it is not unreasonable to expect the diplomatic blowback from Britain’s perceived meddling within Beijing’s sphere of influence to grow stronger in the post-COVID era.

In July, after the UK offered citizenship to almost 3 million Hong Kong residents following Beijing’s implementation of a controversial new security law in Britain’s ex-colony, China issued a strongly-worded yet ambiguous threat of “retaliation.” China’s response is illustrative of the fact that Brexit Britain’s ability to fully harness the Asian century is dependent upon London playing second fiddle to the preferences of Tokyo, Beijing and New Delhi.

Despite Johnson’s lofty rhetoric hailing Britain’s post-Brexit transformation into a “great, global trading nation,” such a vision is not exactly conducive to geopolitical maneuvers that can all too readily be perceived as antagonistic by prospective partners. For instance, Whitehall’s backpedaling over the contracting of Huawei, a Chinese technology company, to construct large tracts of Britain’s 5G infrastructure over national security concerns does not bode well for a future UK–China free trade deal. Similarly, efforts to introduce restrictions on immigration via the adoption of an Australia-style points-based system have proved to be a sticking point in post-Brexit trade negotiations with India, the former “jewel of the empire” with whom Britain shares extensive historical, cultural and linguistic ties.

As a global Britain seeks to navigate a post-pandemic order characterized by increased great power antagonism, retreating globalization and resurgent authoritarianism, Whitehall’s strategic planners must be prepared to make hard-headed compromises between geopolitical and economic objectives in Asia in a manner that has been sorely lacking from Brexit negotiations with Britain’s European partners. Cut adrift from Europe at a time when the global order is becoming increasingly fragmented into competing regional blocs, a rudderless Britain lacking a coherent, sustainable vision of how it seeks to engage with Asia’s emerging superpowers risks becoming caught in the middle of an escalating cold war between the US and China.

Despite the gloomy prognosis for a global Britain standing at the dawn of the Asian century, there remains reason for optimism once the short-term shockwaves of the pandemic have receded. Britain’s elite universities retain a mystical allure for ambitious young Asians seeking a world-class education. China, India, Hong Kong and Malaysia account for four of the top five countries of origin for international students in the UK. In addition, with two leading vaccine candidates in development at Oxford and Imperial, a British breakthrough in the fight against COVID-19 would further bolster Britain’s reputation as a global hub of research and innovation.

Such cutting-edge academic expertise — combined with London’s enduring status as a global financial center, post-2021 visa and immigration reforms targeting highly-skilled professionals, and the cultural imprint of large Indian, Pakistani, Bangladeshi and Chinese diasporas — ensures that even post-Brexit Britain possesses the latent potential not only to attract top-class Asian talent, but also to emerge as one of the Asian century’s biggest winners outside of the Indo-Pacific. Whilst Brexit has undercut the Blairite vision of Britain as a “pivotal power” bridging the gap between the US and Europe, the United Kingdom’s deep-rooted historical, cultural, linguistic and economic ties with Asia’s rising powers provide ample scope for recasting Britain as a pivot on a grander scale: as a global hub bridging East and West.

However, such aspirations remain little more than wishful thinking unless British policymakers can formulate a coherent approach toward the Asian century, which has so far been absent. Nevertheless, tentative steps have been taken in such a direction over recent months. Whitehall’s merging of the Department for International Development with the Foreign Office is likely to deal a blow to British influence in less-developed corners of Asia, at least in the short term. Yet Johnson’s renewed commitment to spend 0.7% of GDP on foreign aid enables a more cohesive, long-term approach with developmental issues, allowing funding to be streamlined toward teams of world-class specialists, such as the UK Climate Change Unit in Indonesia or the Stabilisation Unit supporting post-conflict reconstruction in fragile states like Pakistan and Myanmar.

Similarly, the Foreign Office’s recent adoption of an “All of Asia” strategy is indicative of a more comprehensive approach to forging partnerships across the continent, balancing conflicting security, diplomatic, trade, developmental priorities, as illustrated through the establishment of the UK’s first permanent mission to Association of Southeast Asian Nations (ASEAN) bloc in January 2020.

Before It Sets Sail

As the nature of post-pandemic global order emerges over the coming months and years, a global Britain will find itself navigating a turbulent geopolitical environment made infinitely more challenging by the aftershocks of the coronavirus. This includes a worldwide economic crisis, decreased globalization, declining faith in multilateral institutions and rising great power tension, all of which threaten to derail Johnson’s post-Brexit voyage into the unknown before it has even set sail.

Whilst Britain and its Western allies have bungled their response to the public health crisis, Asia’s dynamic rising powers are already bouncing back from the pandemic and laying the building blocks to ensure that the 21st century truly is Asian. From Beijing’s “Belt and Road Initiative” to New Delhi’s “Make in India” to ambitious future vision projects such as Saudi Arabia’s Vision 2030, Vision of Indonesia 2045 or Kazakhstan 2050, Asia’s emerging powerhouses all champion integrated strategic frameworks to harness the unprecedented shift in global wealth and power eastward, which the COVID-19 pandemic has catalyzed.

A global Britain’s greatest mistake would be to supplement such a long-term calculated strategy with the half-baked geopolitical gambits that have so far typified Brexit Britain’s approach to the world’s largest continent. Indeed, for the UK to truly unleash its full potential in the dawning Asian century, it must look to Asia itself for inspiration.

*[Will Marshall is an intern at Gulf State Analytics, which is a media partner of Fair Observer.] 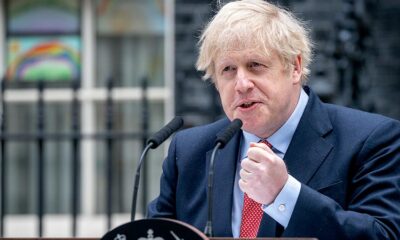