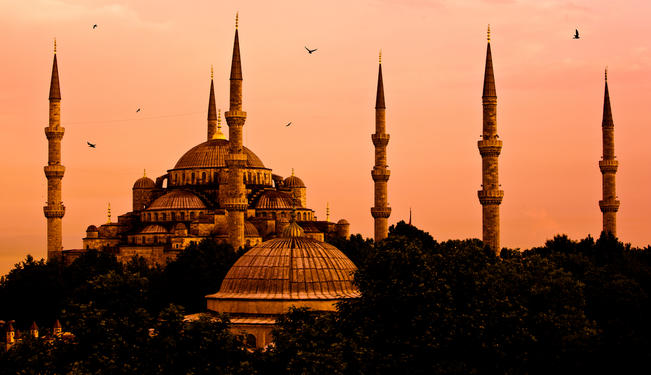 The Gulf states dominate headlines with Qatar’s controversial hosting of a World Cup and the high profile acquisition of European soccer teams, but they may be meeting their match in an emerging competition for being the Middle East and North Africa’s prime sports, transportation and economic hub.

Turkey may not have the Gulf’s financial muscle, but on virtually every other front it brings assets to the table that smaller oil-rich states lack: geographic and demographic depth; a soccer-crazy population that fills stadium; storied, internationally accomplished and recognized clubs; a respectable international track record in a variety of other sports, including basketball and volleyball; ethnic, cultural and ex-colonial links across a swath of land stretching from China to the Atlantic coast of Africa; a functioning democracy with all its warts that many see as a model for the Muslim world; a highly developed educational sector; one of the world’s largest standing armies; and a state-of-the-art industrial base that drives on indigenous labor.

Turkey ranks number 18 on the list of the world’s largest economies ahead of Saudi Arabia at number 20, the United Arab Emirates at 30 and Qatar at 51 despite the fact that many Gulf states have a nominally higher GDP.

A look at Turkey’s sporting ambitions as well as the expansion of its national airline, Turkish Airlines, and its plans for a third Istanbul airport tell the story. Turkish sports minister Suat Kilic hinted this week at his country’s ambition, telling World Football Insider that Turkey’s hosting this summer of the FIFA Under-20 World Cup, the biggest sporting event to be held in Turkey to date, would be a platform to “showcase Turkey’s capabilities” to host the 2020 Olympic Games.

To be sure, its not all smooth sailing for Turkey. Its premier soccer has been wracked by a major match-fixing scandal exasperated by a power struggle among Islamists and financial crisis as a result of over spending. And European soccer body UEFA’s opposition to Turkey’s simultaneous bid for the Olympics and the 2020 UEFA European Football Championship (Euro 2020) prompted it to spread that year’s tournament over a multitude of European nations. Qatar, the UAE and China moreover have easier access to capital compared to Turkey

But putting such concerns aside, the future looks promising. Beyond bringing a greater number of key assets to the table, Turkey, the literal dividing line in Eurasia, and the Gulf compete on a level playing field in exploiting geography to create an air transportation hub at the meeting point of Europe, Asia and Africa: like Qatar and the UAE, Istanbul is at flying equidistance from Sao Paolo and Sydney with easy access to Africa and Central Asia.

Turkish Airlines flies to 200 destinations and to more countries than any other carrier in the world as opposed to Emirates’ 120 and Qatar Airways’ 115 destinations. Turkey’s plans for a new, six runway airport, the world’s largest in terms of passenger capacity, capture its global ambitions. Turkey is currently entertaining bids at the very moment that Qatar is about to open its long-touted new air hub. The new airport would also surpass Dubai, which currently claims the honor.

Both Turkey and the Gulf states populate a volatile region that has embarked on what is likely to be a decade of messy and at times violent and bloody change. At this point, Turkey is closer than the Gulf to the turmoil with its long border with Syria and close cross-border links as well as its proximity to Lebanon that increasingly is teetering on the brink.

But contrary to the autocratic Gulf, which so far has largely been able to ring-fence itself against the wave of popular uprisings sweeping the Middle East and North Africa, few predict upheaval in Turkey, a traditionally politically instable country that is witnessing a decade of stability and near unprecedented rule by one party that has gone from one electoral victory to another.

Turkey’s position as the regional powerhouse could be further boosted by a potential agreement with the Kurdish Workers’ Party (PKK) that would grant the country’s estimated 20 million Kurds greater rights and end almost 30 years of conflict that has left tens of thousands of people dead as well as last week’s restoration of diplomatic relations with Israel.

Reconciliation with Israel potentially paves the way to closer cooperation on Syria and cooperation in developing significant energy resources in the Eastern Mediterranean. It also holds out hope for crisis-ridden Cyprus and progress in resolving the decades-old inter-communal dispute on the island by opening the door to the unthinkable: energy cooperation between Turkey and the Greek-Cypriot dominated government in Nicosia.

Turkey expects its sporting ambitions to be boosted by the ongoing visit of a 14-member committee of the International Olympic Committee (IOC) to evaluate Istanbul’s bid as well as by world soccer body FIFA secretary general Jerome Valcke for the U-20 World Cup draw. The tournament in late June and early July involves 52 matches in seven host cities and will immediately follow the 24-nation Mediterranean Games. The IOC last year rejected Qatar’s bid for the 2020 Olympics.

Prime Minister Recep Tayyip Erdogan, a soccer fan and former player, makes no bones about Turkey’s strategy that includes sports. “The whole world must know that Turkey has big ambitions, based on national will and a strong State,” he told Turkish diplomats almost a decade ago.