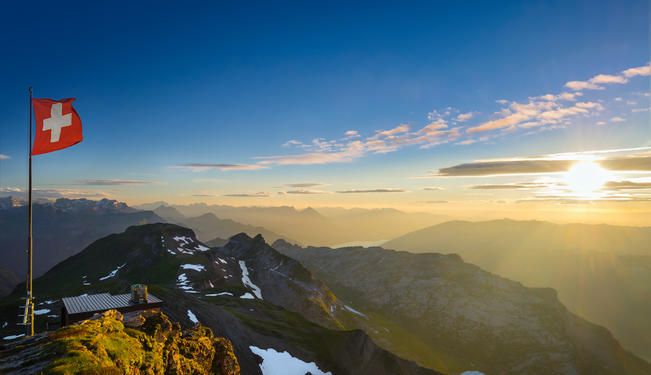 Switzerland’s political system might be slow, but it’s “grown-up” politics.

James Blake Wiener, Communications Director of the Ancient History Encyclopedia and independent writer, speaks to Diccon Bewes, the award-winning author of Swiss Watching: Inside the Land of Milk & Money, about what makes modern Switzerland tick.

James Blake Wiener: In Swiss Watching, you dispel many widely held stereotypes of Switzerland, offering instead an impression of a contradictory nation that functions extremely well. Having analyzed Switzerland and its inhabitants for many years, what intrigues you the most about this enigmatic country?

Diccon Bewes: That it actually functions! Switzerland is a country that shouldn’t exist as it defies most of the norms for a modern state. Whereas other countries came into being through a common language, political beliefs, wars of independence or imperial designs, none of those applies to Switzerland. It is a country in spite of its geographical, linguistic, political, historic and religious divisions, many of which have defined it for centuries, but never yet succeeded in destroying it.

These fault lines still shape the country today. Protestant vs Catholic, conservative vs liberal, town vs country, French vs German; all of these internal divisions are what make Switzerland the way it is, but each is kept in check by the political system.

As for stereotypes, Switzerland has more than its fair share, from banks and skis to francs and cheese. The fascinating thing is that many of these clichés are true: the trains (and people) do run on time; there is virtually no unemployment; the chocolate is divine; and the streets are clean. But not all the cheese has holes, cuckoo clocks were originally German, and the Swiss do have a sense of humor.

Wiener: While Switzerland is more widely known for its chocolate and watches, it comes as a surprise that the Swiss invented several items of everyday life: aluminum foil, the electric toothbrush, and Velcro. Ironically, Switzerland also exports more weapons abroad (per capita) than the USA or UK. What accounts for this Alpine resourcefulness, and why are the Swiss manufacturing weapons after nearly 500-years of official neutrality?

Bewes: Switzerland has had to be resourceful because it has no natural resources, other than water and wood. No coal or iron, not enough farmland and never any colonies. It has always had to rely on its position at the center of Europe to make a living from import-export, and in Swiss terms that meant importing raw materials and exporting high quality goods. And part of that is a canny knack for innovation, from the Swatch watch to the toilet duck.

Behind this inventiveness lie two sources of creative impetus: material gain and a stable society. Switzerland has produced 25 Nobel prizewinners (more per head than any other country) but much of the innovation comes in less cerebral areas, ones which have an immediate material benefit. Making money is a strong motivator for many Swiss. And having a currency and society that are strong and stable provides the necessary background for long-lasting creativity.

When it comes to weapons, material gain is also the main motive. Switzerland is famously neutral but that doesn’t mean it is pacifist. You see armed soldiers in the streets and defense consumes eight percent of the national budget – all in a country that in theory doesn’t have a single enemy. The Swiss are like boy scouts, always prepared, and in this case that means being armed to the teeth at all times.

The dark side of this show of force is the arms trade, with Switzerland exporting weapons to over 70 countries. Morality vs money is an age-old dilemma, but while the Swiss often claim the former as mediators, they also collect the latter as exporters. They merely overcome the neutrality question by selling arms to both sides.

Wiener: You describe Switzerland as Europe’s “landlocked island,” analyzing its reluctance to join the European Union. Switzerland is, however, a member of the European Free Trade Association (EFTA) and took part in negotiating the European Economic Area (EEA) agreement. What do you think the future holds with regard to Swiss-EU relations?

Bewes: Switzerland may be a member of EFTA but it’s almost the last man standing. Everyone else has either joined the EU or signed up to the EEA, both of which the Swiss have rejected. It really is an island at the heart of Europe, not sure of how to behave with its overbearing and all-encompassing neighbor. Economically it has little choice, but emotionally it doesn’t want to join the party. And the Swiss hate being told what to do by anyone. In that respect, Brussels is just the latest in a long line of opponents from the Habsburgs and Napoleon, to the Nazis and the US Senate. It’s telling that the Swiss president, Ueli Maurer, recently used the story of David and Goliath to illustrate Switzerland’s position in the world.

Instead, the Swiss negotiated a series of bilateral agreements with the EU, covering areas such as free trade and free movement of people. Cherry-picking the best bits is the normal criticism from the EU, although Switzerland has paid millions to Brussels to help the euro and the new members in Eastern Europe. But it looks like those days are over. Tax avoidance, bank secrecy, and not conforming to EU rules have strained relations, and the Swiss will soon have to decide where their future lies: simply in Europe or actually a part of it.

Wiener: Rising xenophobia has affected many parts of Europe, and Switzerland is no exception. From the recent scandal involving Oprah Winfrey in Zürich to the controversy over the banning of minarets, Switzerland has faced its share of criticism too. How well does Switzerland assimilate and manage its foreign-born population, which numbers over 20 percent?

Bewes: Firstly, many of Switzerland’s foreigners are not actually foreign-born. They are second or third generation, born in Switzerland but without automatic nationality rights (unlike in the USA). So while still technically foreign, they are largely well integrated, having grown up here and speaking the local dialects.

Secondly, Switzerland has a long history of taking in refugees from conflicts, be they Tibetans, Sri Lankans or Kosovars. It’s this humanitarian instinct that is being pitted against the rising xenophobia, fuelled by the largest (and richest) political party pursuing an anti-immigrant agenda. The long-term issue is integration in a country that historically had no empire, no slavery, and so no experience of a multi-ethnic society.

Thirdly, the Swiss are often wary of people even from the other side of the country, let alone from another country. Until the railway age, many towns were cut off from each other by the landscape, fostering a climate of only trusting local people. Strangers were potential enemies, and some might say they still are.

As for Oprah, I think that was more a case of typically brusque Swiss service rather than racism. For an American especially, service here can be distinctly unfriendly and cold.

Wiener: Switzerland is exceptional as it is a blend of cultures, languages, and many distinctive regions. Unlike their neighbors, the Swiss like to think of themselves as the Willensnation – a nation formed by popular consensus. What are the virtues of direct democracy, and what can the rest of the world learn from the Swiss federalist tradition?

Bewes: Forget North Korea, if any country deserves to be called the People’s Republic, it is Switzerland. Citizens vote every three months in referenda on anything and everything, from joining the UN to shop opening hours, and important laws cannot be passed without a popular majority. Direct democracy means that no one party or person is ever in control as the people can always have the final say.

Consensus – not confrontation – typifies Swiss politics, although there are of course deep divisions between the five or six main parties. But the ever-present threat of a referendum means that the parties must find a solution acceptable to the majority, not simply to their own narrow interests. That has two benefits: no one can ever claim “not in my name,” as every Swiss citizen has a chance to have a say. And it builds a long-term sense of community, taking decisions that benefit the many rather than the few, for example, voting against six weeks’ holiday as the legal minimum.

The downside is that the system is slow (women didn’t get the vote until 1971 because the men kept voting against reform) and can be hijacked by well-organized single-interest groups, as the minaret ban showed. But it works, and usually works well because everyone is, or can be, involved. It is grown-up politics.