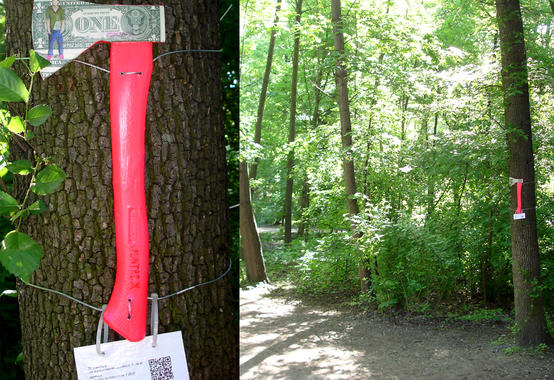 A new kind of street art introduced by Peintre X adds color to gray city streets. [Click the image above or scroll down to view the mini gallery.]

“I believe that art can be more than a collector’s item that can be bought and sold.” These are the words of a Munich street artist who has started an urban art project that is trying to achieve exactly this. Peintre X literally takes art to the streets by painting small water colors which are then put in frames and attached to walls in different public places. Next to it there is a QR code connected to the artist’s homepage. A picture of the painting is taken and published on the Facebook page of Peintre X. Although paintings are mainly hung up in Munich, the paintings are also  found in Athens, next to the Eiffel Tower in Paris; in other large cities in Europe and beyond.

Meeting the initiator of this project is a bit of a challenge though, since the artist’s identity is completely concealed: no real name, no age, not even the gender is disclosed on the internet. Even emails are only signed with an oracular “the X.” Yet, it is a worthwhile effort, for despite the impression of being in a sort of blind date, one can get an insight into the artist’s view on art, society, and how the two interact. Peintre’s project started around a year ago and is based on a simple idea: taking art out of galleries and museums and putting it in places where people can get in touch with it more easily.

“Art is in many cases only accessible for a limited number of people. But art is something most people are interested in when they come across it. But it’s not a good that is publicly available for free.”

The street art project wants to change that and is closely connected to Peintre X’s understanding of the artist and the duties connected to this profession: “I see the artist as a mirror of society. If you take a glance at the history of art, artists were always reflecting society whether you look at for example pop art or renaissance or whatever. That is why I think the artist receives a lot of inspiration from society. To me it seems to be completely egoistic to take this inspiration from society as a whole but then make it accessible to only a part of it. So what I want to do is reflect the inspiration I’m receiving and then make it available for society as a whole.” The secrecy concerning the artist’s identity is not so much because the artist fears of being charged with vandalism (paintings are fixed by using easy removable glue) but because to Peintre X, art is greater than the people who created it:

“Art is often overshadowed by the story build around the artist, art then is only judged in connection to the artist. People are more interested in the story than in the art itself. That’s why I wanted to keep these two things separate so that people are able to focus their attention on the art.”

Even among the artist’s friends and family members, only a few know about his project. This secrecy is not uncommon in the street art scene where even big names like Banksy prefer to keep their identity undisclosed. Especially compared to graffiti though, where a lot of actions are also motivated by the wish to get recognition and respect from the scene itself and from outside observers (just think about huge name tags sprayed in daring places), Peintre’s approach to street art is a lot more subtle and less flashy than a lot of other street art.

Still, the artist does not operate in a vacuum and wants to interact with the audience and get its feedback. The way Peintre X includes QR codes in his work, thereby bringing the internet into the project generates this important feedback. Since the artist’s focus lies on how society deals with the role of art in public spaces, such interactive aspect is quite significant. Different from other more controversial forms of street art such as graffiti, the feedback Peintre X receives has only been positive and has increased since the project has become more widely known to the public. Over 600 people have liked the Peintre X Facebook page so far and whenever a new picture is uploaded people like, share and comment immediately. Apparently, the majority of comments deal with the question where the painting on the photo can be found. There is a kind of chase for the paintings going on and it seems that most of them do not remain in the public space for very long. One might think that this would somehow contradict the project’s original idea. Peintre X, however, does not see it as a problem:

“I don’t keep a track of how long pictures remain where I put them. I put them somewhere and then they are common property again. I don’t want to dictate what society does with it, because it’s their property that I have given them back, so it is their decision what to do with it. I don’t even keep a list of where I put them, so I can’t really tell how long they remain in a certain place. Sometimes I come across them by chance on my way through the city. Some have disappeared after two or three days others are still there after seven months. It’s different with every single picture I know for example of some coffee houses where the owners keep an eye on the painting so that no one can take it away.”

It seems that Peintre X’s art and the street art project include a great deal of community spirit which is not only limited to making art accessible for everyone. Small pictures are given away for free by the artist. Recipients of the paintings are asked to consider what it is worth to them and then donate that amount of money to charity. People visiting the Facebook page are also asked to make a donation in return if they take a painting from the streets. By doing so Peintre X feels that everyone involved in that deal wins:

“The person who gets the painting is happy, I’m happy, because my art made someone else happy and there may be a person on this planet who is not starving the next day because there was a 10 Euro donation for rice or something. So art can indeed be a tool to improve things.”

Changing the world through art? Maybe. But what this kind of art can definitely achieve is to give people a different perspective on their everyday streets. So next time you are looking at these grey city walls keep an eye open for Peintre’s colorful frames or at least for the remaining glue that indicates that another piece of art has found a new owner.