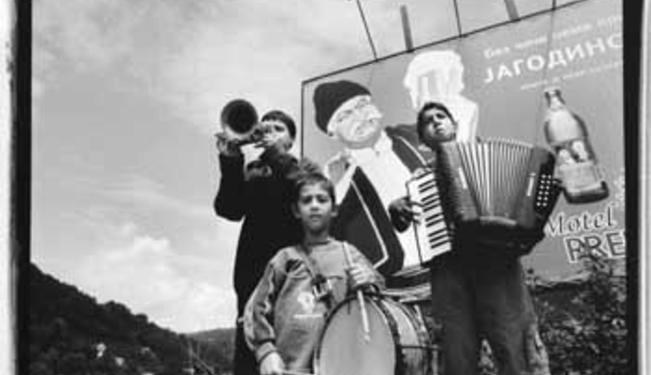 The history and geography of modern Balkan Brass.

After having influenced Flamenco in Spain and Jazz in France with their particular guitar techniques and rhythms, it is today the gypsies of south eastern Europe who are stirring up the contemporary music scene. In the lost plains, mountains and ravines of the Eastern Balkans, the Romani people were subject to persecution, even slavery, or at best condescendence, but have found their way to new glory – at least on the international music scene.

Originally inhabited by itinerant shepherds who disseminated local traditions, legends, linguistic structures and music to a wider sphere, the Balkans are characterized by a constant mingling of traditions. The Ottoman expansion to Europe in the late 13th century made the region receptive to a more oriental culture, which has since been integrated into the local folklore. The spread of the Ottoman Empire also brought the Rrom people with it, who probably first settled in Walachia, (south-east Romania), where they made a living as carpenters, metal workers or entertainers. They have since been appreciated for their musical genius – the more talented are called lâutari, a term originally used for lutenists, but today applicable to all professional musicians. Here, as elsewhere in the Balkan region they are invited to play at weddings, funerals or village feasts. Together they form tarafs or fanfars, with up to 30 people – depending on the client's wealth. The fanfars usually feature a majority of brass instruments; they stand for a rather urban sort of music in opposition to the more traditional peasant style, where woodwinds predominate.

In consequence the typical sound of Balkan Music is a result of a mixture of Byzantine, Austrian and Turkish military, Klezmer and traditional Romani music. Its geographic homeland is widespread and includes the northern parts of Greece, Albania, Macedonia, Kosovo, Serbia, Bulgaria and the regions east of the Carpathian Arch in Romania. Though pronounced in style the Brass varies from one place to another. The repertoire is widespread: from languishing doinas in chromatic vlach scale, to fast dance rhythms, purely instrumental or with vocal support. Each group has its very personal mode of expression. What unites them all is the vitality, the natural ingenuity and yes, one might say, its “soul“. The music has an archaic musical structure, complex rhythm variations and recurring patterns, the latter helping the musicians with improvisation, which is also a key characteristic to this music. Musicians demonstrate this every year during the famous “Balkan Brass Bands Festival”in the southern Serbian town of Guca, where true musical battles are played out on and around the stage.

The Baragan is a wide plain region in Wallachia, which popular writer Panait Istrati describes in his 1930 novel Thistles of the Baragan as the "land which loves him [man] not",calling it "solitude itself", where "between one well and the next, a man has time aplenty to die of thirst. Nor is it any business of the Baragan’s to shield you from hunger, either". It is also this region, where according to Mircea Eliade"space is stronger than time" and whose people's aspirations Lucian Blaga characterises: "The people from the fields do not have such meadows [in opposition to the people who dwell in the mountains], so their soul and mind made up for its atmosphere–through their songs”. It is there that the fatalist joy of the Romani people has transformed into a flourishing musical culture and where the beginnings of Balkan Gypsymania made their start. The famous Taraf de Haïdouks (a band of Romani lâutari) was formed in the village of Clejani. ‘Haïdouks’ are modern Robin Hoods, the word Haïdouk meaning outlaw as much as freedom fighter. Their leader Nicolae Naescu, has long been a giftet violinist and was – after the band's discovery – appreciated by Yehudi Menuhin himself. He would have never dreamed of his coming fame, as he then was in his late sixties and had already put his fiddle away.

The band was discovered and then put together in 1989 by two musicians with Hungarian origins, Stéphane Karo and Michael Winter, who in the quest for new inspiration spent a vacation in Clejani with its more than 200 gypsy musicians. They finally decided to bring the best of these musicians onto the occidental music stages and featured their first album in 1991. "Musique des Tziganes de Roumanie" by Crammed Discs was a sensation as it played the tunes of a completely unknown and exciting musical universe. They gained even wider public attention when they were invited to feature in Latcho Drom (1993), a film honouring the Romani way of life by Tony Gatlif, a French filmmaker, himself of Romani descent. It was thus the Taraf de Haïdouks, that first reconciled the western European auditory system to the unorthodox Balkan style. Winter explains the success in an interview on the occasion of the 1998 edition of "Respect – ethnic and world music festival" by the mixture of old and new: "The older musicians perform more ballads, while the younger ones play at 300 kms an hour and are open to various other styles (…). The older ones are more traditionalist, but (…) They are pleased to see traditional music evolving, and they love the way their children are changing it". The Haidouks made the gypsy style famous, however not with brass instruments. Balkan Brass in its currently popular form was yet to be introduced.

Emir Kusturica takes us to the Land of Brass

The Brass was introduced to the Balkans by the Austrian military and it became especially popular in the region of Moldova, and in the south of former Yugoslavia, where it is still known under a slight adaptation of its original name: Bleh Muzika. It originated in the 19th century, when Serbian popular music was kept alive by military trumpet players. Here the performers are called trubatchi, derived from the term of “trumpeteer”. Goran Bregovic is probably the first well known representative of this style, thanks especially to his cooperation with Emir Kusturica for his 1989 film Time of the Gypsies, a movie for which Kusturica got primed in Cannes in 1989 and which was nominated in the category of best foreign films for the César Film festival of 1990. With Iggy Pop he then composed the music for his first American production Arizona Dream in 1993, and for Underground, which got primed with the Golden Palm at the Cannes Festival in 1995.

By that time Boban Markovic, a Romani himself (and sometimes referred to as the greatest Balkan trumpet player), and his Boban Marcovic Orkestar had joined the Crew. But it was especially Kusturica’s film Black Cat, White Cat which made the music popular outside the Balkans. Today Balkan Brass is popular beyond film music and regularly fills the dancing and music halls of the world. A strong competition to Boban Markovic Orkestar is another Romanian gypsy formation: the Fanfara Ciocarlia – Ciocarlia is a well-known gypsy tune and the name of a beautiful singing bird- from the village of Zece-Prejani, situated in the historic region of Moldova, an area with a great amount of talented brass style musicians. The latter are known to be the quickest brass formation in the world. In 2011, Asphalt Tango, one of the leading record labels in the style, united the two bands for a common album, helping them come out with a true Balkan Brass Battle.

The getting together of the more popular bands such as the Taraf de Haidouks is certainly a new trend. The group, which still recruits from Clejani, is now partnering with true brassers, such as the Macedonian Kocani Orchestra, as well as musicians around the Fanfara Ciocarlia, with whom they have formed the Mahala Rai Banda: The Honorables from the Mahala. Mahala stands for a suburbian ghetto in Romanian, while Rai is derived from the Turkish language and also stands for an oriental music style. New groups with similar styles — such as the Fanfara Kalashnikov from Berlin, have also emerged.

Of course this hype has inspired young musicians from outside the Balkans to get in style. Brass is in accordance with folk music from other mountainous regions, notably Austria, Switzerland and Bavaria. As a consequence young groups now dare to go back to their roots without having to be afraid of boring out their public: they sing in local dialect, mixing brass with funk, jazz, oriental style, electro, ska, and pop, and the world discovers, that Balkan Brass has the ability to evolve in even more interesting forms with time. The scene is far from reaching the end of its possibilities and even though now relatively mainstream, exciting variations are still possible. To mention only the most popular ones: Blehmuzik from Switzerland, La Brass Banda from Bavaria, La Cherga from Austria or Va Fan Fahre from Belgium. The more traditional Fanfara Ciocarlia now pairs up with Shantel, a DJ from Frankfurt known for his Balkan Pop compilations. But Brass is also appreciated across the Atlantic: for instance in San Francisco the Brass Menazeri is quite a success. The brassing-up is not yet over and we are still to be surprised.