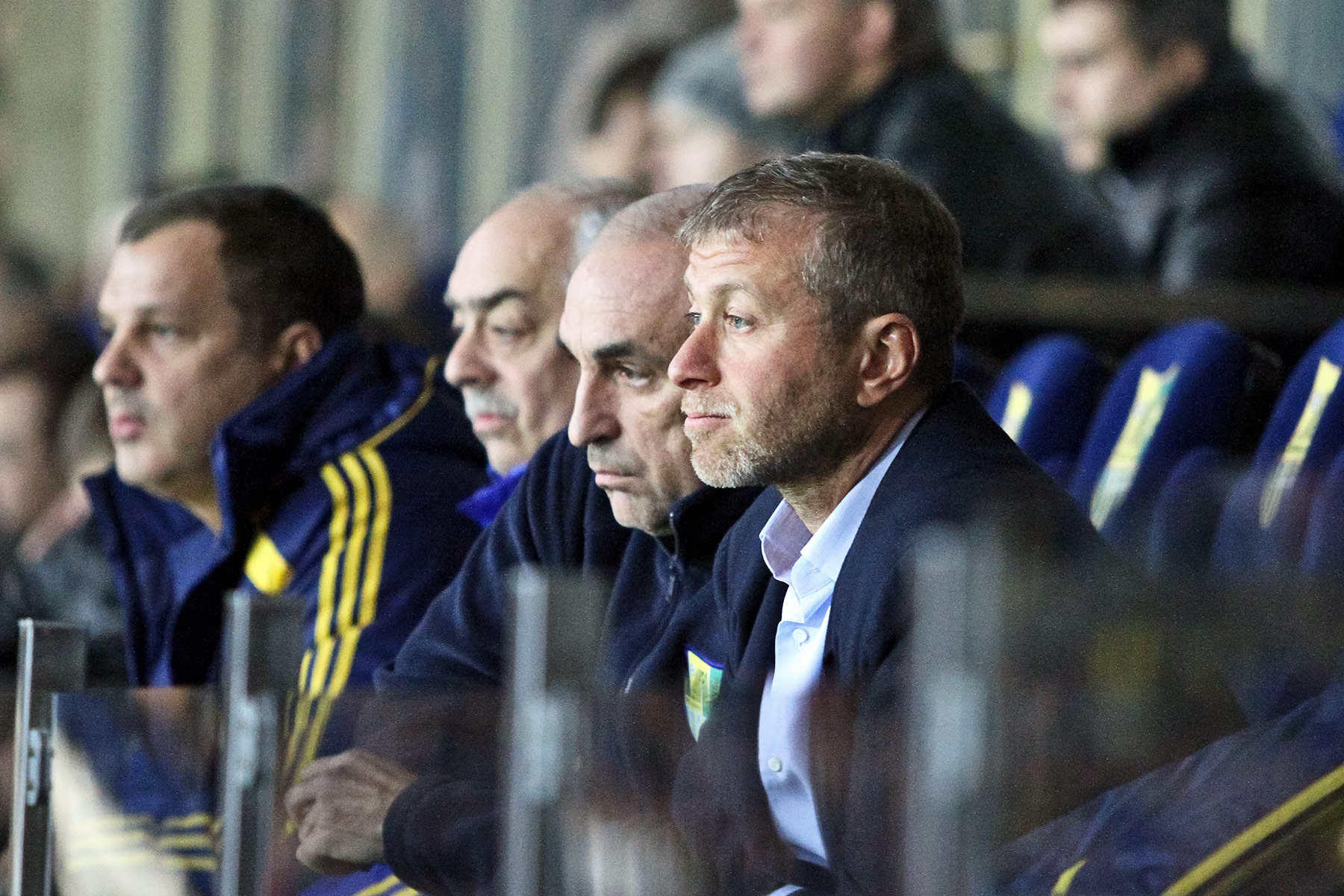 Roman Abramovich (right) in Ukraine during a match between FC Metalist Kharkiv and Sampdoria on 10/21/2010. © Iurii Osadchi / Shutterstock

Terry Southern’s 1959 novel, “The Magic Christian,” is about a billionaire who has a hypothesis: Everyone and everything has a price. His attempts to prove it lead him to offer inordinate amounts of money to people in exchange for irregular behavior. He bribes a parking warden to eat a parking ticket he’s just written, for example. He buys a cosmetics company just to sell useless products. The plot climaxes when he acquires a luxury cruise liner just to insult or reject super-rich passengers. Money buys anyone and anything.

I thought of this shortly after Roman Abramovich bought Chelsea Football Club in 2003 and launched the most extravagant spending splurge in the history of sport. In his first year in charge, his total spending in the player transfer market equated to 40% of the entire Premier League’s expenditure on players. Was this man trying to prove he could buy anything he wanted?

The club was easy: Already deeply in debt (£60 million — around $79 million), Abramovich just paid off the creditors and took control of Chelsea. Then he assembled the strongest playing squad available. The cost of the transfer fees plus salaries far outweighed the club’s income, and in his first five years, Chelsea posted losses of £447 million — a sum that sounds less fantastic today than it did in the 2000s.

Chelsea, at the time of Abramovich’s arrival, was a club of comparable size to, say, West Bromwich Albion. The clubs had similar histories of achievements, comparable fan bases and stadiums. Chelsea was not included in the original elite when plans for the Premier League were formulated in the early 1990s. Abramovich commissioned the transfer of players such as Didier Drogba (in 2004), Andriy Shevchenko and Michael Ballack (both in 2006), signaling that no player was too big — or too expensive — for Chelsea.

The rewards were abundant. Chelsea won the Premier League in the 2004-05 season, losing only one game under the management of Jose Mourinho, and this was but one of a total of 21 trophies, including five Premier League titles, two UEFA Champions League triumphs and a FIFA Club World Cup championship. Chelsea became one of the most garlanded clubs in the history of the Premier League and could lay a legitimate claim to being the best team in the world for long periods in recent history.

If Abramovich’s project was something like that of Magic Christian’s protagonist, it worked like a charm. Actually, Abramovich didn’t need Prospero-like charms — all he needed was money. He spent lavishly and luxuriated in the rewards. But the costs were prodigious. Last year, for example, Chelsea lost £145.6 million. Abramovich made good on the money, as he has done since he took over, by making deposits in the holding company Fordstam Limited, which technically owns Chelsea FC, and which Abramovich owns outright.

Abramovich never explained his profligacy. He didn’t give interviews and seemed to prefer anonymity. I was once asked to divine Abramovich’s motivation and answered by comparing his ownership of Chelsea with his love of art. He has a formidable collection that includes Bacon’s Tryptych, for which he paid $86.3 million. “He has the means to possess things he loves,” I said. “He might have bought Chelsea as a trophy at the outset, but he seems to have formed a loving attachment.”

Even if he did start with a testable hypothesis, the club became more a passion than a project.  He ran Chelsea Football Club not as a business in the conventional sense, but more like a charitable foundation or an endowed college with only one benefactor.

Prised From His Grasp

And now it is over: Abramovich has had the club he created prised from his grasp. He won’t appear at Stamford Bridge again and will probably never again set foot on English soil. The British government, as we know, has invoked powers to freeze his assets (of which Chelsea FC is one; the Bacon may be another), forced him to put the club on the market and denied him access to the proceeds of the sale. He has set the asking price of £3 billion, presumably reflecting the money he has sunk into the club over his tenure, but he won’t see a penny of it. (The pertinent legislation is the Economic Crime Bill, which was rushed through Parliament in early March.)

We shouldn’t underestimate how much pain he must be feeling as he reads about the bids for his club. Negotiations are being handled by US merchant bank Raine. Abramovich himself is not allowed any input. As an aside, Abramovich has not committed a criminal offense and is guilty only of having “links” (whatever they may be) with Russian President Vladimir Putin or his regime. British Prime Minister Boris Johnson said, “There can be no safe havens for those who have supported Putin’s vicious assault on Ukraine.” Abramovich has consistently denied historical associations with Putin and has done so for at least 11 years.

As I write, a shortlist of bidders for the club is being considered by Raine. Eventually, the preferred bidder will be selected and — extraordinarily — will then be screened by the government. Paradoxically, the only bidder that would be likely to continue Abramovich’s munificence was a group from Saudi Arabia, which has withdrawn, presumably sensing tenders from that part of the Middle East would not be received favorably at the moment. The others are consortia — associations of several companies.

Whoever buys Chelsea will not need due diligence to realize they will have to hemorrhage money, at least for the immediate future. The club has been promising to break even since at least 2009, when then-chief executive Peter Kenyon promised the club would be “self-sustaining” by 2010. It hasn’t come close. Will new owners persist with the lose-money-to-win-trophies approach?

Football’s Land of Milk and Honey

It’s not inconceivable that a consortium could introduce dramatic downsizing over the next three or so years, allow existing contracts to expire, trade prudently in the transfer market and perhaps model itself on Liverpool, a football club owned since 2010 by Fenway Sports Group Holdings, which also owns the Boston Red Sox of Major League Baseball.

If so, transfers on the scale of the £97.5-million Romelu Lukaku deal in 2021 are likely to be a thing of the past for Chelsea. There may also be some surprise departures to lighten the wage load.

Lionel Messi’s move from Barcelona to Paris St Germain came as a bolt out of the blue last year; at least, till the full extent of Barcelona’s debt came to light. The club owed about €1 billion ($1.1 billion) and Messi’s salary was reputed to be over €50 million. (The ill-fated European Super League was not motivated by greed, as was widely reported, but by the will to survive. Most of the clubs in the original project are ravaged by debt and presumably thought the league offered a route to liquidity.)

The next owners of Chelsea FC will not bring the inexhaustible supply of money Abramovich did. They will be legally bound to honor existing agreements, so players like Lukaku, who earns £16.5 million per year, and N’Golo Kante, who gets £15 million, will be paid for the remainder of their contracts. But the club is unlikely to offer salaries of this size in future.

More likely, the new owners will introduce some kind of internal salary cap. Arsenal has long operated with a wage structure. Other clubs without benefactors typically try to keep a lid on their salaries. Manchester City is owned largely by the Abu Dhabi United Group and spends with the kind of improvidence associated with Abramovich. Whether Saudi Arabia’s Public Investment Fund will turn Newcastle United into another Chelsea remains to be seen. But Chelsea’s new owners will almost certainly take a more businesslike approach.

UEFA, football’s governing organization in Europe, may complicate life for Chelsea’s new owners if it restricts clubs’ spending to 70% of their income. Back-of-an-envelope calculations suggest Chelsea has typically spent more than the whole of its yearly income on transfers and salaries. Even if it expects income of, say, £400 million, the club will have to exercise self-restraint unheard of during the Abramovich era. Presently, wages alone are thought to be £336 million.

The Chelsea case presents an insight into English football’s rise over the past 30 years. In 1985, England’s clubs were banned from European competition for five years (six for Liverpool) due to violence amongst supporters. Since their return, they have grown to dominance. This is due in no small part to Abramovich. After his takeover, international entrepreneurs enthusiastically bought into Premier League clubs and introduced the kind of money that brings bargaining power in the transfer market. Today, owners include investors from the United States, the UAE, China, Thailand, Egypt and Iran.

England has become football’s land of milk and honey. Love him or loathe him, Roman Abramovich is sport’s latter-day Abraham. He has instigated a revolution. At a time in history when sport’s integration into the entertainment industry was almost complete, Abramovich took Chelsea from a respectable but ordinary English football club to one of the world’s foremost names in sport and a brand thrumming with elan and glamor.

A rapacious capitalist to some, a tyrant’s accomplice to others and a moral nightmare to a few more, Abramovich remains, without doubt, the most influential presence in football over the past 20 years. People may not approve of what he’s done, but the effects — good or bad — of his breathtaking foray into sport will be felt for decades to come. 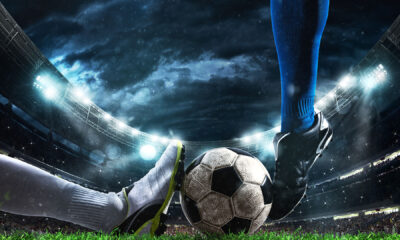