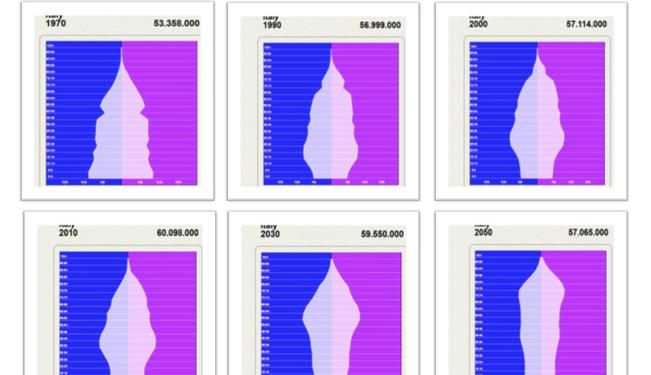 Developed country societies have been steadily getting older ever since the coming of the industrial revolution. But now they are ageing more quickly as birth rates in many developed countries continue to remain well below replacement rate and life expectancy continues to rise. Median ages in several countries are now around the 45 year mark, and during the late 2020s will even near the 50 year barrier. According to UN data, the proportion of the world's population aged over 65 is set to more than double by 2050, rising to 16.2% from 7.6% currently. The elderly dependency ratio (number of 35-54’s compared to 65+) is expected to fall from 3.25:1 to 1.58:1 by 2050 – levels unseen in any society in human history. As ratings agency Standard & Poor’s noted in a recent report, the trend is seemingly irreversible.

The cost of having older, smaller workforces, and supporting and caring for all the extra elderly people is bound to have a profound impact on prospects for economic growth and on public policy in general. In Spain, for example, the cost of the government pension program will roughly double as a share of GDP by 2050.

This pattern affects a broad swath of economies, from Western Europe to Eastern Europe to Asia. The most affected are Germany, Japan, and Italy. The four developed countries that have relatively more stable reproduction rates are the US, the UK, France, and Scandinavia.

Connections Beneath The Surface

The idea that ageing can explain the European debt crisis seems spurious at first. Economists have explained that the crisis was a confluence of different factors – fraudulent spending (Greece), accumulated government debt (Italy), a property bubble (Spain and Ireland), and patently low economic growth (Portugal) – compounded by the application of common remedies. But naturally the search continues for an underlying root cause.

“Saving and borrowing patterns are generationally interconnected”, Hugh says, “and it is one generation saving for its pensions which has financed the reckless borrowing of another, younger one.” According to Hugh, net savings in some countries (for instance, Germany and Holland – two of Europe’s older populations) are directly related to net borrowing in others (notably Spain and Ireland).

One of the reasons that Europe’s political leaders don’t try harder to find a solution is the apparent conflict of interests, Hugh suggests. In the short term the weight of the crisis falls on the young, who suffer high levels of un- and underemployment, while the older age groups have been relatively sheltered: they are in management positions, they are costly to fire, and they have long-term contracts.

Effectively, the size of the over-50 constituency – in conjunction with the disenchantment and apathy of younger voters – creates an inbuilt policy bias which ensures that pensions are maintained as much as possible. For example, Spanish Prime Minister Mariano Rajoy’s first act was to raise pensions by a symbolic one percent, even while he argued that the country was in a desperate fiscal situation.

Some youth are now voting with their feet by emigrating, according to recent anecdotal reports in Spiegel and Reuters about young Spaniards turning up at German language centers. Economists clamor for more policies that encourage movement within the European Union to balance unemployment and satisfy demand for skilled workers in Germany, Austria, and the Netherlands. But such flows reinforce the domination of the “old age” vote in countries that lose young workers, making it even more difficult for those economies to recover sustainable growth paths. In some economies the effect is quite pronounced – in Latvia, for instance, as many as 200,000 out of a total population of just 2mn have left since 2000.

Hugh’s work implies that to return to sustainable growth, the developed world must find ways to pay for its pensions and create youth employment.

One potential solution is the influx of working-age migrants to developed economies. Spain, for instance, received 5mn of these so-called economic migrants from 2000 to 2008. These workers spend money, pay taxes, and in some cases directly provide care to the elderly.

But immigrants tend to be low-skilled, undocumented workers – making them easy to cut loose when the business cycle turns sour. Many of Spain’s economic migrants came to work in the country’s unsustainable property boom and are now unemployed. Others in the agricultural sector have been squeezed out by locals forced to trade down to lower-paying jobs.

In view of the above, Harvard’s Martin Feldstein argues – using Spain as an example – that the revenue migrant workers generate only offsets the government benefits that they and their families consume for healthcare and education. This is especially true if they remit a portion of their earnings to their home countries. Their eventual retirement would then, Feldstein says, exacerbate the ageing problem.

Feldstein’s argument holds less for highly skilled workers who have a high potential to generate jobs and growth. Developed countries might explore green-lighting residency permits for doctors, graduate students, and entrepreneurs from emerging markets who study in universities abroad – though this brings political and diplomatic complications.

For Hugh, the economist, there is not one panacea but rather a “shift in priorities and resources from the old towards the young.” That might include incentivizing couples to have more children, lowering school fees, and increased gender equality so that young mothers can better participate in the labor market.

Hugh’s chief suggestion is to establish a common euro zone treasury to allow pension contributions to be pooled, in effect treating the German surplus and the Spanish deficit as a linked phenomenon. George Soros has called this common treasury the “missing ingredient” in the euro zone project.

Also, Hugh believes older folks will need to work longer to justify the benefits they currently receive. This idea is jarring given the commonly held belief that older employees crowd out younger ones. But according to The Economist, the “lump of labor” argument – once used to discourage women from joining the workforce because they would steal jobs from men – has simply not been corroborated by economic data. Therefore, Spain’s recent move to raise the retirement age from 65 to 67 is a positive step. France has also raised its retirement age from 60 to 62 though the law could be modified by the newly elected socialist party.

Finally, Hugh cautions policymakers against having a “permanent optimistic upside bias” and urges them to take ageing more seriously. Since ageing receives minimal attention in the press (especially when compared to, for example, global climate change), it is not surprising that its significance has been under-appreciated. Notably, though, ratings agency S&P warns of another wave of developed country sovereign downgrades if substantial reforms are not enacted.

And if they are not, Hugh says, “Europe will become a continent for old men.”