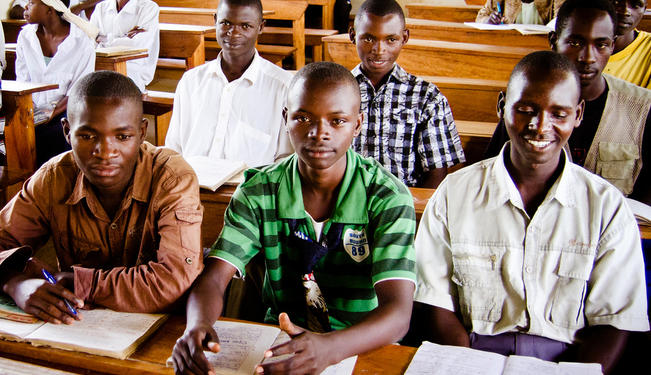 The example of Uganda illustrates how important appropriate measures are in order for a society to benefit from a predominantly young population.

Uganda has one of the youngest populations in the world; with 49.9% of its population between 0-14 years of age, the median age of the population currently stands at 15.1 years. Add high population growth (3.5% per annum, 2011) and it is inevitable that Uganda’s labour force will experience significant expansion in the coming years. But is a young population necessarily a socio-economic blessing?

A young population is a consequence of low mortality and high (but diminishing) fertility. In Uganda the high – though declining – fertility rate (6.7 children per women on average) and declining mortality have resulted in a ‘bulge’ in the working-age category. This phenomenon, called the ‘demographic dividend,’ is traditionally viewed as favorable for economic growth but it is no guarantee.

How the Demographic Dividend Works

Firstly, there is an increase in savings rate. This occurs as there is increased life expectancy, and larger surpluses in capital available as a result of fewer children. Lower fertility on average also implies greater female participation in the labour force. Furthermore, a lower dependency ratio allows people to invest more on their own healthcare. This leads to greater productivity of the workforce on average and hence leads to economic gains for the country. The government may also be able to channel funds that were previously spent on education and healthcare towards productive investment as the number of children decreases. The crux of this relationship essentially lies in the availability of surplus for investment as a result of lower dependence. This in turn is dependent on the structure of incentives in an economy, which is shaped by a country’s institutions and public policy. The Republic of Uganda is an excellent case in point to demonstrate how a growing labour force could potentially have adverse consequences for an economy.

Chances and Challenges in Uganda

The culture of saving among households in the country has not taken root at this stage of its development. According the World Bank, the saving/GDP ratio in 2010 was a mere 13.5%. The impediment to boosting the rate of savings can be explained by multiple factors including the lack of financial integration and procedural impediments. It is estimated that in Uganda there is less than one bank branch per every 100,000 people. A detailed study by the UN Capital Development Fund (UNCDF) revealed that people with access to formal bank accounts in Uganda saved three times more in the 12 months of study than those who held their assets in the ‘semi- and informal sectors.’For the permeation of a formal banking set up amongst a populace that is largely rural, and derives most of its income from the primary sector, it is essential that banks are accommodating of small transactions at frequent intervals, and are easily accessible.

In addition to financial integration, there is the important question of building human capital. A large productive labour force, gainfully employed, sums up a perfect recipe for growth. Evidently, such is not the case. The proportion of the labour force with secondary education or specialized skill/vocational training is dismal. Although, the majority of the labour force is currently employed in primary activities, Uganda aims to engineer an oil and energy revolution. Addressing infrastructural constraints in this respect requires skilled work.  The lack of access to quality employment is a pertinent concern for the nation’s young labour force. The National Youth Policy identifies a lack of employable skills, access to land, capital and technology, and few apprenticeships as a major roadblock to building human capital. Furthermore, the rate of employment generation is lagging behind population growth. In 2009/10 youth unemployment (ages 15-24) at 4.3%, was found to be higher than that of the labour force as a whole (3.8%) though both are very low by official measures.

To its credit, Uganda is working to correct the imbalances that have stunted its growth in spite of its large labour force.

The President’s ‘State of the Nation’ address in 2011 addressed this issue citing a number of corrective measures taken by his government. In the same year, the government officially launched the National Employment Policy to identify priorities and strategies to improve labour productivity and increase employment opportunities. The Ministry of Gender, Labour and Social Development, provided non-formal vocational and entrepreneurial skills training to 334 youths, and seed capital grants to 167 youth groups in 19 districts in 2011. The government is also focusing on building Labour Market Information Systems to provide accurate and timely information to streamline demand and supply in the labour market. The establishment of a Youth Venture Capital Fund to support entrepreneurial initiatives, and the national Business, Technical and Vocational Education and Training (BTVET) programme are among other policy interventions in this regard.

The government of Uganda recognizes the challenge and potential opportunity arising from its unique demographics. If ignored, or not adequately addressed, the country could get caught in a low-productivity trap characterized by high levels of unemployment, infrastructural bottlenecks and unrest. It remains to be seen whether policy prescriptions will be sufficient to tackle the issue.