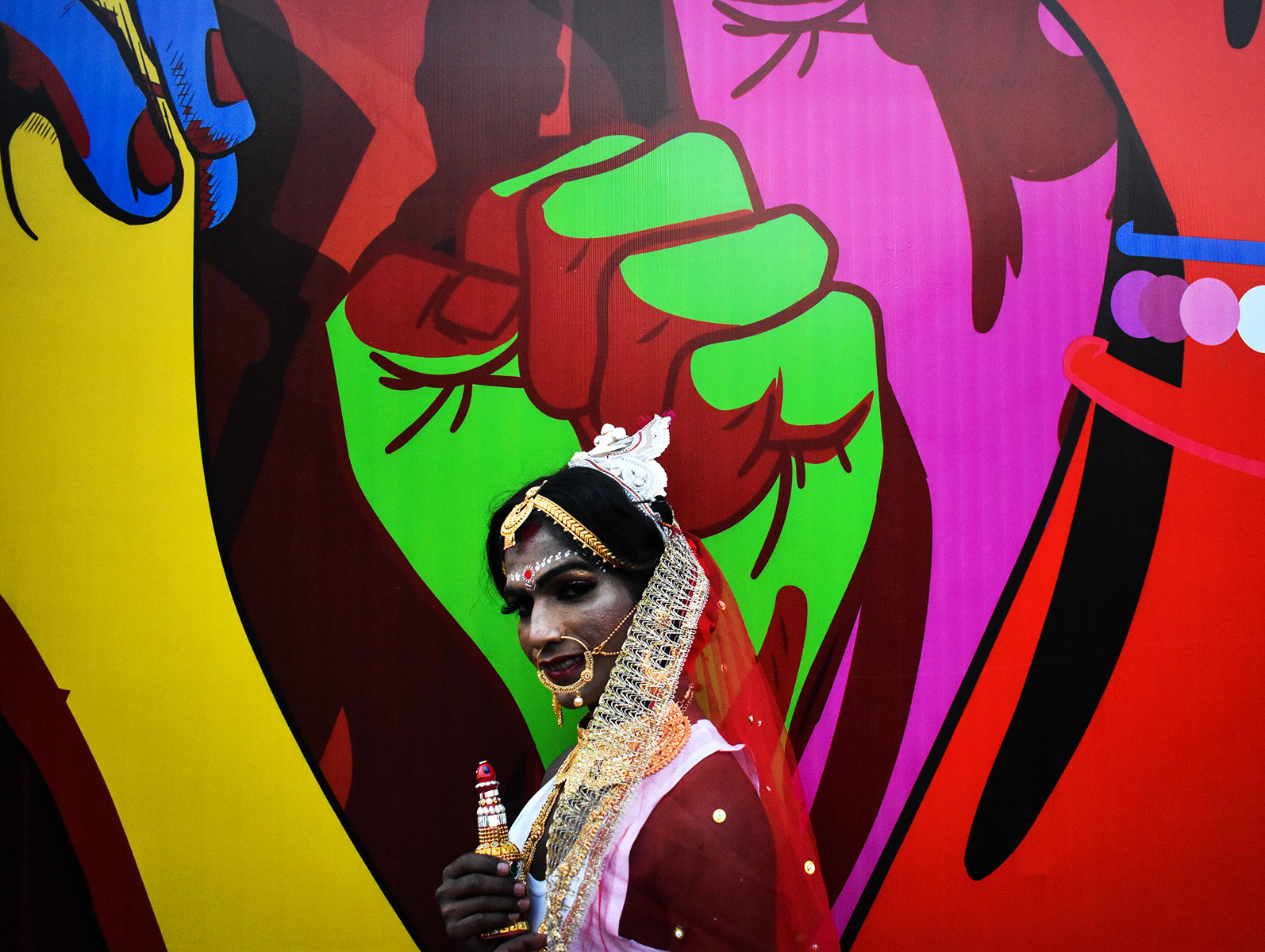 Amid a raging pandemic, India’s transgender community, which numbered 5 million a decade ago, is at its nadir when it comes to vulnerability to disease and distress. The reason why there are no recent statistics is because the 2011 census was the only time that population data for non-binary persons, referred to as “others,” was recorded. In 2014, transgender people were given the status of the third gender in India after a long legal battle. The NALSA verdict mandated the government to add a third-gender column to all its documents as legal recognition.

Unfortunately, transgender people are still being “othered.” Most recently, the registration form on the official COVID-19 vaccine portal of the government of India has three gender categories: male, female and others. “It sounds discriminating and demeaning,” Dhananjay Chauhan, a leading transgender activist from Punjab, told me over the phone.

Marriage Equality Is Still a Dream for India’s LGBTQ Community

What came as an even greater disappointment was the fact that participation data for transgender persons have been removed from the dashboard of the CoWIN online vaccine registration portal. The infographic now reflects only the data for males and females under the vaccination category, delineated in blue and pink respectively.

The figure for “others” can’t even be determined by calculating the difference between the total number of vaccinated and the vaccinated males and females added together because the dashboard lists the overall number of doses administered to date, which includes both the first and second shots. This erasure becomes a journey from “othering” toward rendering the “others” invisible, revealing just how problematic the transgender community’s situation in India really is.

No, I Haven’t Been Vaccinated

On January 16, India began its vaccination drive. However, data show that by May 16, only 3.97% of “others” have received at least one shot, just 0.013% of the overall number of vaccinated. With the third wave of infections ravaging through the country, the third-gender population is still waiting for vials to get allotted for their vaccination camps. Pushpa Mai, a leading trans activist from Rajasthan, says: “So far, we have been able to vaccinate only 50 transgender persons in Jaipur and we are waiting for our another camp date. As soon as we are sanctioned the vials, we shall proceed further. Till then, what else is in hand than to wait — such is the situation everywhere.”

Simran, from Rajasthan, was coughing during the phone call. She was out of the town to participate in a kinnar sammelan, the community congregation. When asked about getting vaccinated, she snapped: “Didi, why do you keep on asking the same question every time you call? Don’t you know the state already? I HAVEN’T been vaccinated. Would you arrange it for me? Can you?” She said that none of her dera (community house) friends were vaccinated, which has caused a lot of problems.

Sometimes, transgender people who live in deras, those who prefer to call themselves kinnars or hijra and are engaged in traditional community-specific roles, often keep a distance from the transgender people running NGOs and community-based organizations (CBOs). Simran relies on badhai for her livelihood, a practice where the hijra or kinnars — who are said to be bestowed with a divine gift — go door to door on festive occasions asking for presents and alms in return for blessings. During the pandemic, this source of income has largely dried up, leaving many helpless and reliant on begging and worse. A vaccination certificate would go a long way to help them return to their traditional way of life.

According to Mai, pooling in NGOs and CBOs is not enough because there are districts and villages that don’t have educated transgender representation to be able to organize such camps or even know whom to approach. With large parts of the transgender population lacking education and tech literacy, many are unable to register online, which is the only option to get in touch with vaccination centers. There is a need to raise awareness through television, newspapers and other media to get transgender people to get vaccinated and convince their friends to do so as well. Mai’s proposal is that besides the approach of looping in NGOs and CBOs, local chief medical health officers should take initiative to get the transgender population vaccinated in their respective areas.

Another roadblock to registering for vaccination is a lack of identity documents. Due to the stigma surrounding them, many transgender people have abandoned their parental homes at a young age or have dropped out of school due to discrimination and outright assault. This means that the majority are left with either no proof of identity at all or only with one that states the gender they were assigned at birth, which they no longer identify with. The provisions of providing them with transgender identity cards are still being discussed out by the government, which couldn’t come soon enough at this critical time.

Alisha (not her real name), from Chandani Chowk, had to resort to prostitution in order to survive during lockdown and is now exposed to a higher risk of catching the virus through her clients. “Initially, I was scared to death of getting this vaccination,” she tells me. “But then I decided that anyhow I am going to die, better take a chance by getting vaccinated; probably I might survive. And I contacted an NGO and got vaccinated through their vaccination camp.”

This initial vaccine hesitancy Alisha describes has deep roots and is among the factors affecting the low uptake rates among the community. Transgender people often report discrimination at hospitals and public places because of their non-conformity. In colonial times, transgender people, then commonly known as eunuchs, were categorized as habitual offenders or natural-born criminals under the Criminal Tribes Act of 1871 and were punished for their cross-dressing practice. Historic persecution not only rendered transgender people invisible in the public sphere but also laid the foundations of a transphobic society.

To this day, transgender people are seen as a matter of curiosity. “There are various layers of discrimination in health care access in this country. The doctors are curious about the transgender identity, and so exploit them in the process,” Shuvojit Moulik, founder of Civilian Welfare Foundation, a Kolkata-based NGO, told LiveMint. During my research, many reported that doctors and medical professionals would examine their genitals even when the only complaint is a cold or a cough. Many report medical negligence. It is hardly a surprise that transgender people try to evade these discriminating and transphobic spaces, preferring to rely on traditional medicine or local quacks for treatment.

Shreya Reddy, who identifies as a transwoman and works as a clinic manager at a transgender health center in Hyderabad, points out the irony that even those transgender volunteers running the vaccination camps aren’t taking the jabs. This often creates further skepticism among those who come to the vaccine camps.

Exposure to hormone therapies, HIV and complex sex reassignment surgeries leave transgender people immunocompromised and thus more vulnerable, and understandably more skeptical about the side effects of a new vaccine. According to Equality magazine, “communities that are underrepresented in medical trials, including those for vaccines, have developed considerable mistrust in the overall effect certain medicines and products will have on their health.” This is compounded by the fact that the scarcity of doctors who specialize in gender reassignment has resulted in many transgender people reporting being treated like subjects of an experiment by plastic surgeons who lack the necessary expertise.

Reddy shares her own experience of vaccine hesitancy. She says that there is no information regarding the possible side effects of the COVID-19 vaccine, like fatigue, fever and body pain. Because of this, the severity of post-vaccination symptoms made many like herself who have undergone gender reaffirmation surgery believe that they were going to die. She herself felt pain and dizziness for two days after receiving a shot, thinking that something has gone wrong. Despite being a health worker, Reddy had no one to assuage her fears.

A Time for Recognition

Following criticism of the low vaccine uptake among the community, the Ministry of Social Justice and Empowerment issued directions to states and union territories to facilitate unhindered and indiscriminate vaccination for transgender persons. The states invited community organizations to act as a bridge to get the transgender population vaccinated. But since transphobia has them to live on the margins of society, unidentified, local authorities don’t even have proper records of the transgender population and need the community to help them reach this most vulnerable group.

The complete erasure of vaccination data on a site like CoWin deals a further blow to representation and equality. It is high time that the Indian government and society acknowledge that if transgender persons are being “othered” or neglected in something as seemingly innocuous as writing, this will inevitably translate to deadly neglect in real-life terms. Thus, the primary need here is to impart their transgender identity on registration forms and certificates and abandon the anonymous and dismissing “others” classification. There must be the inclusion of the transgender population in other sets of government data to address their needs and demands. Only then will there be a realistic hope for the emancipation of this long-marginalized community.