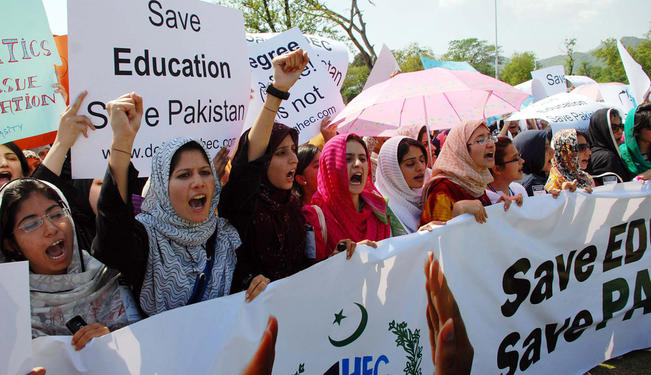 Even though its protagonists bracket it with developing countries, unlike its competitors, Pakistan has an abysmally low literacy rate; only one fourth of its adults are literate.

With the presence of a strong Pashtoon culture and values in remote areas which do not encourage female education, the rise of militancy has made the education situation in Pakistan worse. According to the Governor of Khyber Pakhtunkhwa (KP), Masud Kausar, the literacy rate in Federally Administered Tribal Areas (F.A.T.A) stands at 16% for males and 3% for females, making it a major hindrance in development of the tribal belt.

Although Pakistan has had to face various crises over the past decade, education has never been given due attention. In all fairness to the government, the escalation of militancy post-September 11 and a rising string of terrorist attacks in the country could well be attributed to this neglect as the state diverted its attention to fighting extremists throughout the country. Still, the government cannot be taken out of the equation for holding major responsibility for not taking solid measures to curb militancy through education. This is because the already low GDP spending on education of 2.5% (in 2006) has reduced to a paltry 2% (in 2012). Militancy, coupled with substantial cuts in higher education spending, have led to the abandoning of various educational projects in KP and FATA.

This 2% annual GDP spending on education, compared to 20% on defense, itself suggests the level of seriousness among policy makers regarding the issue. With such a low percentage of spending on education, socio-economic progress seems hard to achieve in the near future. The pending decision by the government devolving Higher Education Commission (HEC) to provincial governments would also put a dent on the future education prospects of financially weak provinces such as KP-FATA. HEC's initiative to bring foreign scholarship for low-income bright students helped in increasing the PhD teacher pool, not only in Pakistan but also in KP and FATA.

Militancy, from 2005-2011, left a huge mark not only on education, but also on the people of the Frontier. Fear of terrorism ceased all recreational activities in educational institutes. Female students were forced and threatened to use veils to avoid negative consequences from the Taliban. Co-education institutes received constant threats of suicide attacks.

Scenes of fear and stress still hold a strong mark on minds of local students, including myself, when students were not allowed to leave university premises because of terrorism. Using public transport was like having a sword hanging above our heads – one was constantly afraid of militants and their suicide attacks. In such a situation, receiving education with an open and relaxed mind was next to impossible.

The staggering differences between public and private sector education standards, and the lack of resolution between the two, also lead to fewer employment opportunities for the underprivileged, generating a sense of frustration among the youth. In turn, militant organizations used this fact to their advantage. A shocking incident narrated by a watchman working in Peshawar and belonging to FATA, Khyber agency, revealed that people in his village preferred to join  militant outfits and rural mafias because they were paid  double the amount compared to what laborers and watchmen like him earned in the urban centers. He further said that this trend had also reduced the interest in education among the youth of his village.

The aforementioned reasons for lack of education and literacy are also giving rise to various other social issues, putting the lives of thousands at risk. One such issue is related to public health and awareness. Dr. Shakeel Afridi, a resident of FATA, faked a polio campaign to help track Osama Bin Laden, the Al Qaeda head and 9-11 mastermind, in Abbotabad. The killing of Osama in a US-Seal operation on 2nd May 2011, lead to nationwide criticism against Dr. Afridi for allegedly helping the Americans. It has been more than a year since the incident that polio campaigns have been banned in FATA by tribal elders and Taliban Heads, who doubt the motives behind such campaigns. This ban has put to risk thousands of children who are deprived of polio vaccinations.

The government and policy makers need to realize that maintaining an ambiguous policy on militancy and low spending on education would not help in grooming ambitious moderate leaders for Pakistan. The religious narrative, dominant in the region, also makes such low income families believe that Islamic education holds a high priority compared to modern education. Mass awareness campaigns using radio, the primary mode of entertainment in rural areas, and cell phones, could help change the mindsets in the region. Coupled with that, calls for the closure of religious seminaries called madaris also hold little logic as most of the country's population, which lives below the poverty line, depends on this free source of education.

Increasing the frequency of suicide attacks adds to the miseries of students who have to pursue their education amid growing fears of insecurity. The militants also have to realize that no religion or faith promotes violence and targeting innocent students and educational centers is nothing but an act of cowardice. Grass roots reforms, implemented by the nonprofit sector, need to be introduced in these seminaries. For example, imparting vocational and computer skills for students seeking religious education, could be a place to start.

Substantive measures need to be taken to eliminate the roots of extremism from the madaris of Pakistan. Jamia Binoria, one of the largest madrassas in Pakistan, could be taken as a model where a major emphasis is laid upon modern education, internet skills, and office automation along with imparting basic Islamic education to students. In the coming years, bringing such reforms to the structure of religious education in remote areas and implementing a uniform curriculum in schools and colleges will be of utmost importance in order to groom future generations to face the challenges ahead.