After 70 years of independence, India is finally making headway against Pakistan in its proxy war on Kashmir.

Kashmir is approaching an inflection point. The tide is turning with the relentless targeting of insurgents by Indian security forces. It is not merely the numbers that are impressive with 126 terrorists being killed up until August 6. The fact that security forces have succeeded in neutralizing most high-profile terrorist leaders has ensured that the backbone of the insurgency is being systematically broken.

First, the elimination of these leaders suggests that Indian forces have increased coordination and gotten their act together following the cataclysmic violence after the killing of Burhan Wani in July 2016. At the time, a new terror strategy of stone throwing — used to provide cover for insurgents and portray security forces as Goliath against the stone-throwing David — had been reintroduced by Pakistan’s Inter-Services Intelligence (ISI). It is to the credit of the security forces that they stuck to their task. The stone-throwing mob has since dwindled and terrorists, bereft of cover, are being regularly taken out.

Second, the local population’s exasperation with continuous violence and shutdowns inflicted by proxy groups like the Hurriyat has helped Indian forces receive actionable intelligence from locals. Sexual exploitation of Kashmiri women by militants has served to increase the antipathy for the latter. The killing of Abu Dujana as he visited his Kashmiri wife was a telltale sign of his movements being compromised. The terrorists have also augmented local animosity after their brutal killing of Lieutenant Umar Fayaz and Deputy Superintendent of Police Ayub Pandith. Instead of driving fear into the locals to desist from joining the security forces, the action has only served to display their blind barbarism and earn opprobrium from Kashmiri civilians.

Third, the tightening of a noose around the financial shenanigans of the Hurriyat by the National Investigation Agency (NIA) has decapitated its financial abilities. The Hurriyat’s involvement with terror activities in the Kashmir Valley has been the worst kept secret in the state. Successive governments in New Delhi, however, indulged the group in the mistaken belief that — similar to the northeast secessionist leaders — the Kashmiri Hurriyat could be gradually brought into the electoral mainstream. For some time, Mirwaiz Omar Farooq seemed to play the part. But with the gradual ascension of the Syed Ali Shah Geelani group in the Hurriyat, the movement displayed open contempt toward any reconciliatory approach by the Indian government and displayed sympathies for terrorists.

The green light to the NIA to pursue the illicit hawala transactions of the Hurriyat was a manifestation of the fact that the government has reached the end of its tether. It is evident that the Hurriyat has overplayed its hands at being the sole hope for peace in the valley. The lack of public support to the Hurriyat has always been evident from its efforts to shirk valid political activity. Even the call for azadi (freedom) had been gradually converted into an effort to accession with Pakistan.

Terrorism, as the examples of the Taliban and the Islamic State suggest, thrives more on financial than ideological support. In the 1980s, the mujahedeen ran out of steam when the Central Intelligence Agency closed the financial pipeline. The Islamic State has been similarly damaged by the loss an oil refinery in Mosul, Iraq. Deprived of the funds that allowed it to not only survive but also to thrive while piggybacking terrorism, the Hurriyat faces imminent annihilation. With the stone throwers not receiving money for their activities, most analysts expect street violence to diminish in Kashmir.

Does this mean that terrorism will come to an end in the Kashmir Valley?

Far from it. Notwithstanding the neutralization of terrorists and the disruption of their financial network, the ideology that promotes terrorism continues to proliferate. For the elimination of every Sabzar Bhat or Abu Dujana, the Pakistani army and ISI will find youth with a love for guns, girls or cash as replacements. The ideology of Islamic fundamentalism that has taken a stranglehold over the Pakistani military ever since the advent of General Muhammad Zia-ul-Haq in 1977 finds ideological reasons to target India, which it portrays as the land of the infidels. When combined with vengeful feelings for the humiliating defeat in the 1971 war, the ideological antipathy makes for a combustive cocktail for the Pakistan establishment.

As per Christine C. Fair, author of Fighting to the End: The Pakistan Army’s Way of War, the “Pakistan Army views its struggle with India in existential terms.” For the military, as she observes, “Simply giving up and accepting the status quo and India’s supremacy is, by definition, defeat.” Therefore, to expect a revisionist state to reconcile to the existence of India is chimera.

For the Pakistani army, regaining absolute control over the country’s polity after the judicial coup against former Prime Minister Nawaz Sharif is indicative of the fact that the military is the only institution that matters in Pakistan. Along with ideological and realpolitik motives, the military has another reason to wage war against India. Conflict is an immensely lucrative enterprise. This darkens prospects of peace in the Kashmir Valley.

The Pakistani military is likely to keep using a combination of religion, indoctrination and money to promote terrorism. It will continually try to sabotage Indian security forces. For Pakistan, the likes of Sabzar Bhat, Abu Dujana and Yasin Yatoo are sacrificial lambs at the altar of its strategic imperatives. The resurrection of Hafeez Saeed — designated as a terrorist by the United States, the European Union and India — as a political activist is another chapter in Pakistani perfidy to keep the terrorist pot boiling in the valley. Since even legitimate political parties in Pakistan cannot exist without the discreet sanction of the military, it is safe to presume that Hafeez’s political venture has the complete backing of the olive greens. The army will utilize his services to needle India through his rabid sermons from beneath the political veneer.

Pakistan also has the added confidence of receiving Chinese support, which it perceives as inevitable given the economic and strategic compulsions confronting China. The Pakistani military is convinced that any possibility of conflict between India and Pakistan will lead to Chinese intervention, given its $60 billion investment in the China-Pakistan Economic Corridor (CPEC) and the overdrive that Beijing has undertaken to ensure its success. Further, the Chinese, who have been taken aback by a robust Indian response in the Doklam standoff in Bhutan, would like to settle scores with India by keeping Kashmir aflame. Pakistan hopes to make the best use of this “new great game,” in the same manner it leveraged its geopolitical position during the Cold War.

India, however, needs to utilize conditions as they approach an inflection point. With terrorist leadership being decimated on a regular basis, the foot soldiers will soon be in disarray. The fact that the Hurriyat will be unable to provide financial succor to sustain terrorism and its proxies is bound to exacerbate conditions for terror groups.

THE FINAL MILE FOR KASHMIR

It would be premature to predict whether Kashmir has reached what strategists refer to as the “final mile.” But the proactive approach by the Indian government has definitely brought it closer. India can ill afford wastage of this opportunity, as it did in 2011 when security forces had made brilliant use of hard and soft power to bring down violence in the valley and increase public support for democratic activities. In the same year, 82% turned out to vote in the panchayat (village council) elections as Kashmiris sought peace, change and the amicable settlement of civic grievances. Omar Abdullah led the National Conference government. However, he soon frittered away the gains made from the battlefield and Kashmir reverted to its violent past. Certain families and cliques in the Kashmir Valley who, like the Pakistani military, have made personal fortunes out of the business of violence will again try to keep Kashmir combustible.

The handling of the “final mile,” therefore, will decide the future of Kashmir. Since the problem is both internal and external, it has to be tackled on both fronts. India must realize that despite the operational success of its security forces, there can be no permanent military solution to the conflict in Kashmir. History is a witness to the fact that, in guerilla warfare, absolute military victory is a mirage. Kashmir is no exception. However, hard power would compel the Pakistani proxy groups and individuals to decide between the option of leaving the Kashmir Valley, being eliminated or sitting at the negotiating table.

The mainstream political parties need to take advantage of this situation and revive political activity in the valley. Given the low credibility of Kashmiri politicians, this will not be easy. Volatile security conditions make it even more difficult. Indian security forces will, in addition to targeting terrorists, need to provide a safe environment for political activity so it develops roots in civil society. Politicians need to reach out to the common people in the hinterland and convince them of the futility of violence and benefits of peace. Panchayats need to be rejuvenated and vituperative religious venom has to be countered with sensible discourse. Alienated individuals need to be convinced that azadi or accession with Pakistan is a futile pipe dream that has turned Kashmir into a nightmare.

Externally, too, India cannot fall into the trap of negotiations with Pakistan. For long, Islamabad has behaved in the manner of a guerrilla, convincing the world of its desire for talk whenever its surrogates have been pushed on the back foot before reverting to its nasty ways after recuperating its strategic strength.

To counter this, India needs to proactively place a precondition of handing over Hafeez Saeed and Zaki-ur-Rehman Lakhvi for their role in the 2008 Mumbai attacks before any discussion. The international community needs to know there can be no peace in the region unless Pakistan is compelled to give up its good terrorist, bad terrorist policy and desist from inflicting violence on India. 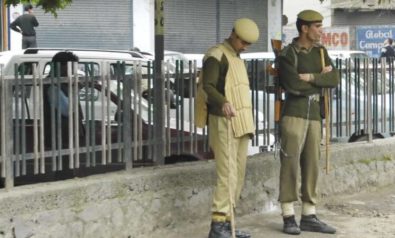