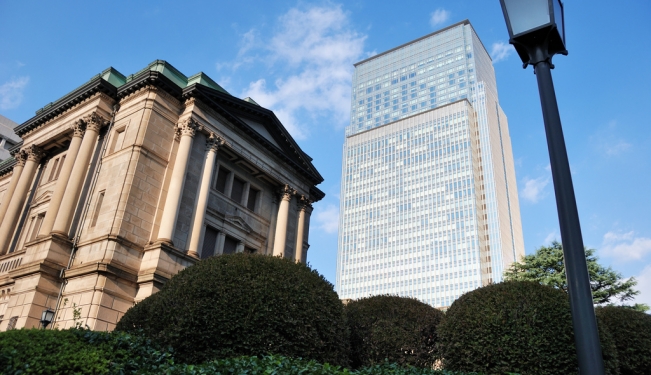 In early 2001, faced with a rapidly deteriorating financial situation in a near zero interest rate environment, the Bank of Japan (BoJ) initiated a then radical monetary policy in an effort to fight deflation and stimulate the ailing economy.  Through a method known as quantitative easing, the Bank of Japan shifted from a targeted overnight lending rate to a targeted current account balance, conducting open market operations to maintain the specified level.  Making a long term commitment to maintaining a near zero interest rate policy, the Bank of Japan began a purchasing plan of long-term government bonds, asset- backed securities and equities. It sought to  effectively flood Japanese financial institutions with excess liquidity and subsequently stir economic activity while flattening out the yield curve to keep long term interest rates down.

Sound familiar?  It should.  With the initiation of the Federal Reserve’s second round of quantitative easing, or QE2, the United States is following the economic footsteps of Japan by resorting to unconventional monetary policy as a means of stimulus.  Given Japan’s past experience with quantitative easing, and the time it has had to analyze its merits and demerits, the Japanese perspective on quantitative easing policy (QEP) should be a key factor in guiding the Federal Reserve’s implementation of unorthodox monetary policy.  With a Japanese economy that is currently facing real deflationary dangers and has struggled for growth after the end of quantitative easing in 2006, the warnings from Japan’s financial turmoil must be heeded should the United States continue to pursue a similar course.

The immediate Japanese reaction to the announcement of QE2 mirrored that of many other nations.  With the high potential of further excess liquidity flowing out of the American financial system into the emerging markets in pursuit of higher returns, Japanese and other economists feared the onset of hyperinflation and commodity price hikes in the developing world.  A particular fear for Japan has been the impact of QE2 on the strength of the American Dollar, with the Yen nearing an all time high. Japanese economists fear a cheaper dollar would have severe consequences on Japanese export driven recovery. Although it has been acknowledged that Japan will likely make short-term positive gains through improvements in global securities market performance, long run worldwide implications are feared to possibly outweigh any such gains.  This trade-off between short term upsides and potential long term global detriments has given way to a Japanese sentiment of caution regarding further quantitative easing, whether it be at home or abroad.

This cautious approach  reflects Japan’s own experience with unconventional monetary policy.  While the complete effects of Japan’s 2001-2006 QEP are still uncertain, preliminary Bank of Japan reports from 2002, 2003, 2006 and 2009 point out its limitations.  Built upon two pillars of long term commitment to maintaining a zero interest rate policy (ZIRP) and ample liquidity in the markets, the BoJ reports find that while QEP was indeed effective at stabilizing financial institutions, it was not effective as an economic stimulus measure until stabilization took full effect.

Current BoJ Governor Masaaki Shirakawa, in a 2009 talk on unconventional monetary policy and a 2002 report on quantitative easing, highlights the key role that both commitment to ZIRP and excess liquidity had on financial system stability.  Shirakawa comments that by providing ample liquidity in the financial markets, banks were less likely to default on short term obligations; thus, decreasing chances of near-term default and restoring public confidence in the financial system.  Once the banking system had stabilized an accommodating environment for economic recovery, fueled by BoJ commitment to ZIRP which sought to flatten the yield curve and subsequently decrease bank lending rates/corporate bond interest, would allow for the excess liquidity in the financial system to act as an economic stimulant.  Governor Shirakawa’s sentiments essentially voice the overarching viewpoint of the Bank of Japan on its quantitative easing experiment.  In separate reports, working papers, and speeches on the topic, former BoJ Governor Toshihiko Fukui and economists Hiroshi Ugai and Naohiko Baba all attribute the stabilization of the Japanese financial system to quantitative easing but make clear that its effects on actual economic stimulus are unclear.

In fact, Governor Masaaki Shirakawa, as a BoJ economist, published a report in 2002 titled “One Year Under ‘Quantitative Easing’” that highlighted the difficulty in utilizing monetary policy in order to stimulate economic activity.  He writes that within an economy that faces a zero interest rate boundary and is mired with a substantial amount of nonperforming loans, it is “difficult to expect monetary easing to result in activation of financial institution’s behavior”.  Though only a tentative assessment coming a year after the implementation of QEP, Shirakawa and the BoJ witnessed “little stimulus arising from a reserve increase” under a ZIRP and concluded that reserve increases under ZIRP lead to little economic stimulation.  However, in the same report Shirakawa highlights recent calls for monetary easing akin to QE2 that seek to increase the market liquidity through the purchase of long-term government debt, corporate bonds, equities and other securities.  He continues that this policy may have a more pronounced effect by altering of risk premiums through supply and demand changes.

While the BoJ points out that the most important effect of quantitative easing remains in its stabilizing qualities, Tomoya Masanao, Executive Vice President of PIMCO Tokyo reiterates the policy’s effectiveness as economic stimuli.  However, his argument has a major caveat that serves to emphasize the BoJ’s conclusions while he attempts to refute them.  Masanao proposes that QEP was indeed effective at stimulating the economy and cites eventual bank lending improvement as evidence for his case; he then showcases how this improvement was not possible until the banking sector had recovered.  In essence, for excess liquidity to take effect as an economic stimulus, the financial sector must be healthy and strong.  Without the resolution of fundamental issues within a banking system, investor and bank confidence cannot be restored and risk taking activity will remain low, hampering economic activity.  While the restoration of economic activity in late 2002 and early 2003 could be attributed to QEP, as it has largely been associated with the stabilization of the financial sector necessary for the economic stimulation effects of excess liquidity to kick in, others argue that abundant free cash flows within the private sector, excluding excess liquidity from QEP, were the roots of economic recovery.

As the United States continues with a policy of quantitative easing, the Federal Reserve should draw upon the empirical data available from the Japanese experience with QEP in order to assess the most effective strategies to implement unconventional monetary policy.  By keeping in mind the limitations of the quantitative easing approach while working to enhance its most effective features, this writer believes the Fed can execute an effective policy especially in light of the relative stability of American financial institutions at the time of QE2 implementation.  With QE2 coming as a second round of quantitative easing following the Fed’s first attempt at the policy in 2008, it takes effect within an economic environment of recovery, albeit gradual, that could facilitate the effective use of excess liquidity in the markets.