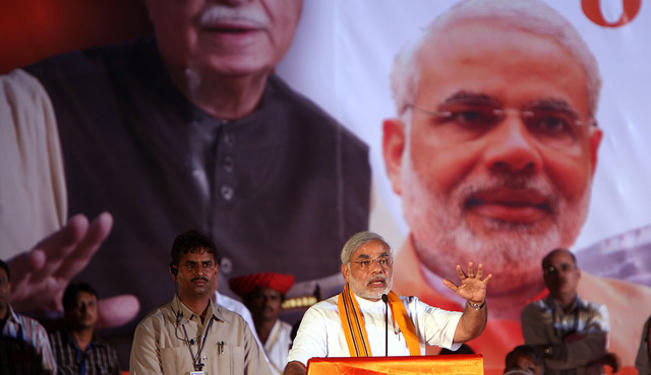 Gujarat’s Chief Minister has his flaws but given that his achievements are a much better alternative than a deluded opposition out of touch with realities on the ground, voters are likely to elect him again.

In the past, elections in India’s western state of Gujarat were in the headlines in national media for barely a couple of days and had little relevance to India’s national politics. This has changed with the rise of Narendra Modi, the Chief Minister of Gujarat who belongs to the Bharatiya Janata Party (BJP).  Modi has risen to great political heights and is increasingly considered a possible prime ministerial candidate in the national Indian elections due in 2014. For this reason, when Gujarat’s forthcoming election is the center of attention not only for national but also international media.

Despite Modi’s meteoric rise, he is a polarizing figure. The pro-Modi camp sees him as a rockstar politician.  He is a prime minister in waiting who will turn Ahmedabad into Singapore, Surat into Hong Kong, Katch into Dubai, and Dholera  into New York, while at the same time keeping retaining the subtly Gujarati soul. On the other hand, the anti-Modi camp considers Modi an arrogant vindictive capitalist autocrat. He is seen as a reincarnation of Hitler with a Hindu identity and an anti-Muslim agenda. This perception mainly stems from his alleged inaction during the Godhra riots where he is said to have covertly supported the slaughter of members of the Muslim minority. The pro-Modi perception stems from admiration for his administration’s track record in governance and economic development.

Modi’s popularity has been increasing nationally despite the concerted and constant attacks that he has faced from the largely Delhi based national media. The national English speaking media has always painted Modi as a provincial parochial full of prejudice and incapable of holding high office. However, as corruption and incompetence of India’s dominant ruling party and of the dominant national media have come to light, Modi’s stock has grown. The fact that he has been able to build roads, deliver electricity and led a largely clean government has made him attractive to India’s middle classes who are yearning for good governance at a national level. India’s middle classes note that no allegations of orchestrating or supporting the Godhra riots have been proved in the court of law.

The rise in Modi’s popularity is not just because of his performance. His government has received accolades nationally and internationally for its business friendly policies, quick decision making, focus on implementation and relative lack of red tape. When Tata were chased out of West Bengal, Modi ensured that they were given the land and the accompanying infrastructure so that the much heralded Nano, the cheapest car in the world, is now manufactured in Gujrat. Modi’s marketing genius is also behind his rising popularity. Shunned by India’s elitist pro-Congress national media, Modi used the Internet and social media to get his message directly across to the people. He is a formidable orator unlike most other Indian politicians who can barely string together coherent sentences. This gives him the ability to connect both with the intellectuals as well as the masses. By all accounts, Modi is the most followed Indian politician on the Internet.Modi is one of the few Indian politicians who actually do their homework. When he addresses investors, he goes into detail about the state’s business friendly policies and infrastructure, when he addresses farmers, he talks about irrigation techniques, soil-analysis and water preservation and when he addresses bureaucrats he sets in great detail their goals and deliverables.  Modi has sold himself as a politician with a vision for development, which is a rarity in India.

However, just as the anti-Modi camp was blinded by its hate for the man, the pro-Modi camp can be excessive in its fealty to the charismatic Chief Minister. The creation of a a “Modi” brand of politics, where every success in Gujarat is attributed to Modi is clearly an unhealthy development. Posters of Modi are everywhere, on hoardings across cities, on government websites and reports, and even on government distributed school bags for elementary schoolchildren. This is ironic because the BJP boasts of its Rastriya Swayamsevak Sangh (RSS) roots where the team spirit instead of personality cult is valued. In Gujarat, however, the BJP has transformed itself into a Modi-centered party, while it continues to criticize the Congress for being family-centered at the national level. In addition, most senior BJP members have either been kicked out or have resigned from the party thanks to Modi’s centralization of power in the state.

The BJP rebels, who include Keshubhai Patel, a former chief minister, have formed a new party named the Gujarat Parivartan Party (GPP). This party is likely to offer a challenge in traditional BJP strongholds such as the region of Saurashtra. The party for all its slogans does not offer an alternative vision for Gujarat’s progress.

The largest opposition party, the Congress is in worse shape. It is in a reactive mode and spends all its time reacting to whatever Modi does. Moreover, it is repeatedly shooting self-goals by its plagiarized ad-campaigns, using abusive language and simply trying to catch up with BJP. Instead of taking on Modi’s policy decisions and tabling better plans, Congress still lives in its historic socialist era promising “free-stuff” such as electricity or water to illiterate masses. Of late, it is offering free laptops to the youth. As usual, there is no mention as to how it plans to pay for the goodies. Furthermore, the Congress led central government is performing miserably and is, by all accounts, estimated to be the most corrupt government in India’s history. It is unsurprising therefore that the Congress has little credibility in Gujarat.

Modi is far from invincible. His government has many flaws. Gujarat is far from the development paradigm that the pro-Modi camp would have you believe. There are serious problems pertaining to provision of public health, education, water and food, issues that really matter to the people. Also, while Modi has published a book on Gujarat’s efforts to tackle global warming, it is difficult to breathe in cities during traffic rush hours because of extreme levels of air pollution. Modi boasts of providing uninterrupted power supply to the entire state, but in reality even areas in Surat, the second largest city, face power cuts three or four times a week.

If the opposition can get its act together, present a plan of action for inclusive growth that will generate employment and create quality educational institutions, attract investment and make agriculture more productive, the voters might well be tempted to vote for them. Gujarat would be happy to vote Modi out if it had a better alternative. In the present scenario, there is no other politician in Gujarat who is at par with Modi. His opposition is out of touch with the ground realities. The youth comprise about 54% of Gujarat’s voters and they are unimpressed by either the Congress or the GPP.

Modi is a shrewd politician. He is increasingly using Hindi rather than Gujarati, indicating that he is definitely looking beyond Gujarat. While others remain silent spectators attempting to decode him, Modi has already begun his national campaign for 2014 it seems. Even if he is voted out, he will probably use his defeat to gain the sympathy of the Indian masses. Gujarat is facing a historic election that is likely to have a bearing not only the future of the state but also of the country.