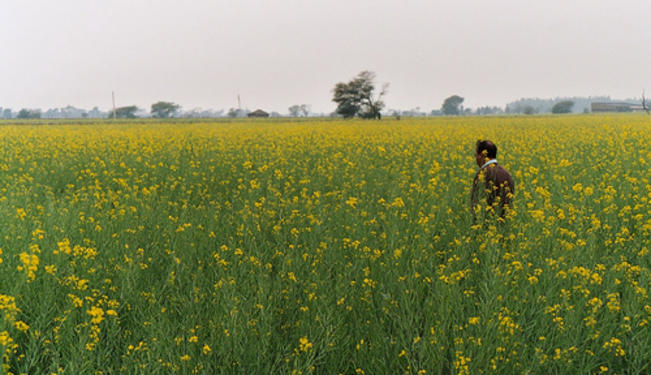 The analysis done in the previous issue points at the opportunity cost of practicing Industrial farming which is equal to the cost of increased amount of nutrition produced through ecologically intensive organic farming. Although stock markets were flooded with excess of a few food commodities, the nutrition produced across the entire nation to feed our population declined drastically leading food inflation; the prices of pulses and oil seeds shot up as India which was once oilseed and pulses independent now has to import the same.

As a result of hiked up food prices, food became unaffordable and inaccessible to the poor in India who were forced to harbor the burden of green revolution in the form of hunger. This is how hunger grew in India as Green Revolution established its foot in India. Several regions under the direct influence of Green Revolution paid an enormous ecological cost too. The farmers in such regions were subject to debt creating agro-economy, one in which the risk of non-payment of debt in time was miscalculated by assuming that crop failures in conventional mono cropping would be not as rampant. Imagine a marginal Indian farmer with a small average land holding who was made to believe that taking loans in the name of investment in seeds, fertilizers, and pesticides would easily translate into greater revenue and profits. The most favourable outcome for such farmers would be to incur huge input cost only to notice that profit generated does not fit the inflated, unreal, and atrocious promise made by the corporation.

Less favorable outcome for such farmer would be to witness crop failure attributed to the ever changing climatic conditions. In such a situation, huge input cost would be incurred with no revenue at all. Such plight of the poor Indian farmer often leads to loss of mortgaged land due to non-payment of debt in time. Such farmer may also witness death of farm animals, poor health of family members, and deadly diseases suffered by other members from the same community, events that people started noticing with the advent of Green Revolution in India.  The region worst affected by various ills of industrial model of farming are Bhatinda and Fajilka districts in Punjab, Kasargod district in Kerala, Vidarbha region in Maharashtra, Bhopal in Madhya Pradesh, Peri-Hyderabad region in Andhra Pradesh, and so on and so forth.

Which System Of Agriculture Generates Greater Revenue For Farmers And Has Lower Input Cost?

The yield output of the same twelve case study was used to estimate the revenue generated in each case study according to mandi prices and according to retail prices. The mandi prices and the retail prices of various food commodities were provided by Navdanya in the month of February 2013. We take these rates as reference rates. The farm output was measured in terms of money that would be received by the farmer by selling these commodities in the mandi or in retail.  The final summary of results was as follows:

By taking market retail rates we further derive that:

(Note: this is additional  revenue generated by organic mixed cropping)

In India we have 452202848 acres of cultivable land. Directing all of it to organic mixed cropping the amount of extra revenue generated would be:

Cost Of The Total Amount Of Fertilizer Used In India=

Total burden of all fertilizers on the nation= market price of all the fertilizer sold+ subsidy= $9.29 billion+$13.49 billion=$ 22.78 billion approx.

By adding the input cost of all fertilizers to revenue generted by organic mixed cropping, the gap between net income generated by organic mixed cropping and conventional mono cropping widens. Alternatively, the net income in case of organic mixed cropping practised on a national level would be higher than that in industrial farming because organic farming does nor require high external inputs in form of fertilizers, pesticides, etc. Hence, cost of fertilizer input should be added to revenue generated by ecological farming on a national level  = $276 bl+ $ 22.78 bl= $ 298.78 bl approx. Over here we consider the sum of $22.78 bl to have stayed with the organic farmer owing to the fact that an organic farmer does not spend money on seeds and chemicals- organic farmer ends up saving the cost of high external input.

The net income would further increase if we take into account:

2)      Input in the form of Petroleum products

3)      Input in the form of electricity consumed

Industrial model of farming with a centralized food system necessarily requires the use of above mentioned products and services. Because of all the external inputs from farm to mandi, 1 qt of grade A rice that is procured at a farmgate price of Rs 1110 in the year 2011-12 commanded an economic value of Rs 2184.20 prior to its destination. [10] The figures indicate that our food system spent an amount of money, almost equal to the true value of growing 1 qt of rice, to make that 1 qt of rice consumable. This in effect means that the end consumer is paying a sum of money much greater than the actual cost of growing rice. The price the end consumer, who collectively constitute the whole nation, pays for a qt of rice is way too high than the price 1 qt of rice is grown at. Because of this inefficient centralized system, food, although available in the market and gowdowns, is inaccessible and unaffordable to the socioeconomically bottom 200-250 million Indians.

Ironically, this group of poorest Indians suffers most from hunger and malnutrition due to the inaccessibility of food, suffers most from diseases due to inefficient immunity attributed to poor nutrition, and resides mostly in rural areas. Majority in this group of Indians are landless uneducated farmers who constitute nearly 40% of rural population. Apart from farming, majority in this group are too unequipped and unprepared to be absorbed by any other sector that would ensure them a dignified and monetarily adequate living. Surprisingly, it is this same group of poor Indians who are discriminated against most on the basis of cast, class, religion, or gender.