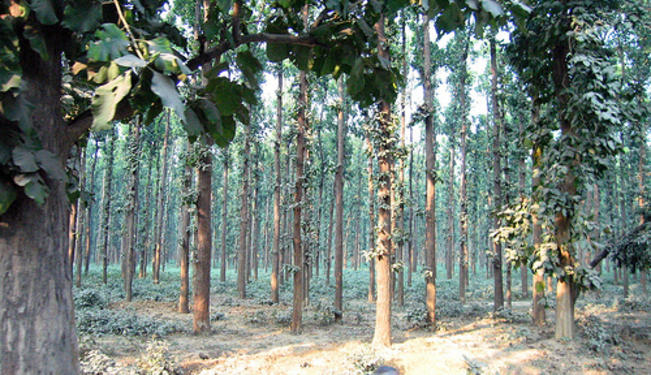 The introduction of chemicals and, thereby, progression to chemical intensive conventional farming led to simultaneous development of two types of trends in Indian agriculture- that of investing huge sums of money in seeds, fertilizers to nourish these seeds, and pesticides to protect them, and that of growing one type of crop in a huge area leading to production of relatively fewer crops in the whole state or region. The new development, initially projected, advertised, and promoted keeping a scientific whip in hand seemed the only solution towards an imaginary hunger free prosperous society.

The notions that technology is the only answer to develop better ways of doing things leading to production of greater quantity of goods and that switching to chemical intensive, technology intensive, oil intensive industrial model of agriculture are the outcomes of natural human wisdom; such wisdom, working to end all suffering and to shift the Production Possibility Curve to the right, led to mass propagation of a delusion, a euphoria that commoditized food. What Indian Diaspora failed to consider was how more of rice, wheat, corn, soya, cotton, and other few cash crops automatically translates into hunger alleviation and prosperity at a time when production of pulses and oil seeds was completely destroyed by a wave, called Green Revolution. The revolutionary part emerged as centralization of food economy, commodification of a few food items (out of hundreds if not thousands of food items consumed by humans), and, in turn, provision of direct and indirect benefit to “The Industry” , an entity with a self-proclaimed hypothetical  burden to take the economy of 1.2 billion Indians, who define India, forward. The Green Revolution, however, incurred a huge cost to the nation and its people in the form of 270,000 farmers’ suicides in India, in the form of hunger and malnutrition, in the form of food inflation, and in the form of ecological destruction and overuse of resources.

The difficulty to sustain the gains made through Green Revolution, a phenomenon common at many places, leads to stagnant farm output and sluggish agricultural growth. As a solution to the problem, the Industry proposes Green Revolution 2.0, a newer version of the disease that is at the root of the problem and that can be compared to if not classified as a weapon of mass destruction. The Green revolution not only jeopardized the interest of the farmers, but also made our food chain more dependent on harmful chemicals and oil. The initiative benefitted the Industry at the cost of squeezing the farmer at every possible level from buying seeds, fertilizers, and pesticides at high cost to selling produce at unrealistically low price. Farmers were only shown output of one commodity as USP that attracted farmers in herds and flocks to join the movement. Subsequently, Indian farmers, in their journey towards prosperity, experienced unwanted evils of Industrial form of agriculture such as high input cost, high rates of crop failures attributed to climate change and contrary to conventional promise, compulsory debt cycle leading to bankruptcy in some if not most of the times, and eventual suicides to relieve oneself from the clutches of bankruptcy and the trauma of loss of land.

Even when a farmer smartly shields himself or herself from the evils of Green Revolution listed above, he or she is still vulnerable to the environmental impact of Green Revolution, impact that can be felt over the health of the farmers who is handling deadly chemicals, over the health of the soil that is sprayed with poisons, and over the health of the rivers, flora, fauna, and human civilization up the chain. There are some basic questions that need to be addressed. We framed questions according to popular knowledge, questioned the assumptions at root level, and produced answers, backed by evidence, that point to the contrary. We expect our readers to kindly not misunderstand our view as anti-globalization. It is just globalization of food and agriculture that we are talking against.

Nutrition Produced Per Acre of Farmland In Case Study 1, Sikkim

We took twelve such case studies across three states namely Sikkim, Rajasthan, and Uttaranchal. After tabling the data from twelve case studies in the manner shown above, we calculated the average nutrition produced per acre of farm land in the two systems of agriculture- Conventional mono cropping and organic mixed cropping. The average nutrition produced per acre of farmland through conventional mono cropping and through organic mixed cropping across twelve case studies is presented and compared below:

Average Nutrition Produced Per Acre of Farmland Across 12 Case Studies In The States Of Sikkim, Rajasthan, And Uttaranchal

The table above shows that there is transition to increased production of nutrition per acre of farmland as one switch from conventional mono cropping to organic mixed cropping. Assuming that the results above could be replicated on a national level, we mean that by switching from conventional mono cropping to organic mixed cropping on a national level, the increased production of nutrients would be proportionate to the average of the twelve case studies shown above.  According to Central Water Commission, GOI, total cultivable land in India in 2003-2004 was 183 million hectares. Since our report, “Health per Acre-organic solutions to hunger and malnutrition”, published in March 2011 and available on the internet since then uses the figures mentioned above, we continue using these values in our further calculations and analysis to estimate an approximation of the actual case scenario.

If the results across the average of twelve case studies are assumed to be replicated over 183 million ha, we will produce enough protein to fulfill the protein requirement of 5 billion individuals organically; protein produced conventionally would satisfy only 2.5 billion individuals in the whole year from the same land usage. Additional protein produced through biodiversity intensive organic farming for 2.5 billion extra individuals is sufficient to eradicate protein energy malnutrition from the planet; in reaching this conclusion, we assume that distribution of food will not act as a limiting factor. Similarly, in terms of total food calorie produced for consumption, enough calories will be produced through organic mixed cropping on a national scale to feed 2.4 billion adults, a value that is 600 million adults more than the number of adults for whom energy produced through conventional mono cropping would suffice. It is also assumed that an average adult would consume 2500 kcal every day to stay healthy and to lead a productive life.  Except for Vitamin C, every single nutrient marked increased production in organic mixed cropping over conventional mono cropping.