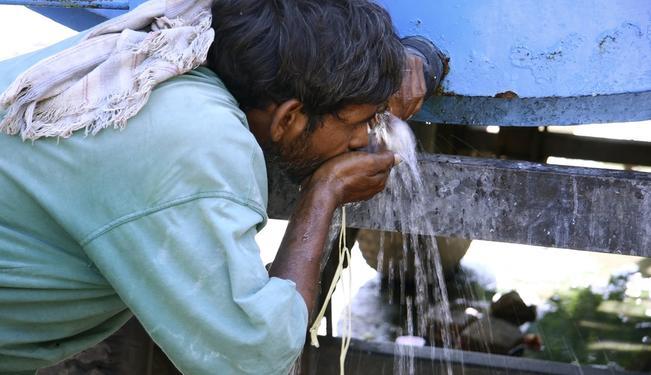 Awareness about the overuse and abuse of water is a must in India. The country cannot afford to incur further external debts for big projects which have comparatively little benefit for society.

It is unfortunate that in India, metropolitans like Delhi, Chennai, Bangalore, and Mumbai face water shortages between February and the arrival of the monsoons in June. Even in this age, people in large parts of the country resort to praying to the rain god for early monsoons.

More than half the western state of Maharashtra is reeling under severe water crisis. Ironically, some states such as Bihar and Uttar Pradesh have huge water resources, but their proper management has been an area of concern. Even the citizens of cities like Patna and Kanpur, perched on the banks of India’s most important river — the Ganga — face water shortages. It is, however, an  interesting fact that only 15% of rain water, if harvested and conserved, would be sufficient to take care of India's annual water requirements. The painful reality is that water rationing in an increasing number of cities is becoming a routine part of daily life. Out of the 6.38 lac revenue villages in India, more than 30% have water problems.

Great civilizations have blossomed on the banks of rivers. India’s rivers are so revered that her people worship them as mother figures. Whether it is the Ganga, Yamuna, Brahmaputra, Narmada, Krishna, Godavari, Mahanadi, Chenab, or Jhelum, Indians have a feeling that their life moves with the flow of these rivers. However, an increasing population, coupled with modern engineering in the name of GDP growth, is threatening the sanctity and survival of India’s rivers. The plight of these rivers has reached scary proportions. On top of it, the political leadership has done nothing to revive the traditionally tested methods of water conservation and management by civil societies, which were weakened and destroyed by the active intervention of our colonial masters. It appears that until water shortage starts to impact India’s planners and policy makers, this essential resource will continue to be managed poorly.

With dwindling rain and depleted water reserves, interstate disputes over the sharing of river water are rising. These disputes directly impact the democratic fabric of the country and adversely affect economic growth.

Despite the deplorable situation as regards water management, we have a few reasons to be optimistic towards finding culturally, traditionally, and technologically appropriate solutions to the water crisis. Several silent movements to harvest, conserve, and preserve water in the remotest drought prone and water starved regions  are under way. In Rajasthan alone, due to sustained community participation, almost 10,000 small and large ponds were either repaired or resurrected over the last few years by the collective efforts of persons like Rajendra Singh.

Water conservation and forest protection movements such as Chipko Andolan, Paani Yatras, and Aapiko Andolan are already serving this cause. In Rajasthan, Tamil Nadu, Andhra Pradesh, and Kerala, effective initiatives for rain water harvesting and artificial recharging of ground water have been undertaken. Consequently, not only ponds, lakes, small dams, and canals have adequate water reserves, but also the wells which had dried up because of the depleted water table. These reserves were replenished slowly with water from surrounding areas. Similar initiatives are required urgently in other states.

Awareness about the overuse and abuse of water is a must among the affected and likely to be affected masses. Government spending running into billions of rupees in the name of either river cleaning programs, construction of large dams, and other such money siphoning projects should be reviewed by a group of experts having high moral integrity. India cannot afford to incur further external debts for big projects with longer gestation periods, which have comparatively little benefit for society. Instead, it should go for mass scale afforestation, construction of ponds, small dams and canals on a large scale. It should be made mandatory for every household in the cities to practice rooftop rain water harvesting, and for industries to completely stop dumping industrial waste into rivers.

Interestingly, two of the four BRICS nations, Brazil and China, have already instituted roof top rain water harvesting in some cities. This helps meet the needs for drinking water and helps replenish ground water levels. In our neighboring nation Sri Lanka, harvesting rain water is a popular and effective means for ensuring water availability in rural areas. Cuba’s “more with less” economic philosophy, based on proper management of its available resources (including rain water), is an example in itself.

In response to a question as to what truly makes them proud of being Indian, more than 70% of people surveyed responded by saying, it was the "availability of safe drinking water to every Indian." Hopefully, with state and community initiatives headed in a more planned manner, the situation will improve perceptibly to meet this vital need of the common people. As the famous Leonardo da Vinci said, "Water is the driving force in nature," and so it will drive us towards our desired goal.