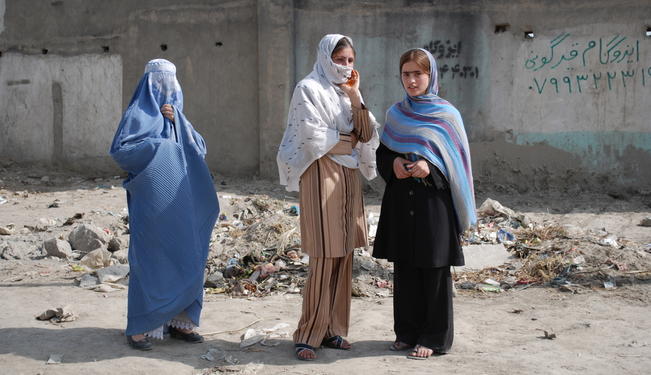 Amid the country's presidential election, Afghans have created new opportunities for Afghanistan.

Afghans' surprisingly enthusiastic participation in their presidential campaign and the election on April 5 should jolt citizens and foreigners alike out of their pessimism about the country's future. Afghanistan is on its way to having its first unequivocally legitimate government since the ouster of King Zahir in 1973. And Taliban efforts to thwart the vote proved their impotence and showcased how disconnected they are from Afghans' reality.

A number of factors contributed to the voter turnout of 60% level, nearly twice the level of Afghanistan's two previous presidential elections (and a threshold the United States itself has not attained since the 1960s).

Most important, Afghans could feel the choice was in their hands and had not already been engineered by an incumbent sitting in the presidential palace in Kabul or in the White House in Washington.

Unlike 2009, the Obama administration wisely refrained from any involvement in this year's election campaign at all. It gave no hints as to its preferences and even barred US funding for pre-election polling.

Likewise, outgoing President Hamid Karzai maintained a public stance of impartiality.  Even if everyone could guess which candidate Karzai does not want to succeed him, he has been careful not to weigh in on behalf of any of the contenders. The United Nations mission, with which he has sparred in the past, took pains to assure the integrity of the vote, and did not join the flight of monitors from Afghanistan.

Another factor encouraged Afghans to feel this election belonged, and mattered, to them: It is Afghan national forces that guaranteed polling security, not foreign military personnel. Afghans' pride in their security forces is rising, and now rests at an unprecedented 80% confidence level — so their vote fully demonstrated "Afghan ownership."

Security generally has improved across much of Afghanistan, certainly relative to 2009. Despite the doubts of many Western military commentators, the international investment in training and salaries for Afghan security forces seems to have yielded an "Afghanistan-good enough" military capability that has kept the Taliban at bay and proved a far more problematic target for a Taliban attack than alien Western soldiers.

It is striking that the insurgency did not surreptitiously stand up a philo-Taliban candidate, who could have used the televised campaign debates to rally opposition to the pending Bilateral Security Agreement (BSA) with the US. Taliban ideologues have, of course, famously disdained elections as un-Islamic. Perhaps what Taliban leaders see around them in their protected refuges in Pakistan is that fulminating fundamentalists win few votes in fair elections.

Whatever their reason, the consequence is that Afghanistan's incoming president will sign the bilateral security pact with Washington with no political backlash. In fact, US President Barack Obama should be very grateful that Karzai withstood Washington's heavy pressure to sign last fall. A freshly elected president will have far more credibility and legitimacy in signing it than would Karzai — a lame duck whom the Taliban have long-derided as a puppet installed by foreigners.

The Obama administration should use the election to move smartly to patch up Washington's relationship with Kabul, which Karzai's adamance sent into a tailspin. The economic assistance that congressional committees slashed in half needs to be restored, quickly, to allow Kabul's new leader to show Afghans real progress. The promised security assistance for the Afghan Army needs to be locked in.

Washington's renewed determination to work with Afghanistan will allow the Germans, Italians and other allies to sustain their own troop commitments for 2015 and beyond.  It should also ensure delivery of the ambitious financial commitments the international community pledged for Afghanistan's reconstruction at the 2012 Tokyo pledging conference.

The apparent success of the Afghanistan election should also have one more salutary impact. It confirms that Kabul's republican regime is becoming a real government, one in which Afghans feel some stake rather than just a façade built by foreigners to cloak a warlord kleptocracy, as its many critics have long charged.

The increasingly factionalized Taliban insurgency is still in denial about the staying power of the Kabul government. Its agents continue to seek quiet contacts with Washington while snubbing Kabul and its high peace council. Once again they are missing the boat. It is the incoming president in Kabul who will hold the political and military cards now.

Indeed, Russia, China, India and Iran will be as much invested in his success as the US, Europe and Japan. Perhaps even Pakistan may see an opening with a new face in Kabul.

In 2013, Prime Minister Nawaz Sharif installed a new army chief of staff who had not come out of the intelligence directorate, and Obama has quietly given him cover with an unannounced three-month suspension in American drone strikes inside Pakistan. If Sharif can accelerate the retirement of officials in his country's security establishment who have bet so long, so heavily and so ruinously on the Afghan Taliban, he may afford a much-needed reality check to his country's guests.

Yes, there are lots of reasons to be despondent about Afghanistan's trajectory after 35 years of war. Even an election as electrifying and successful as this one will not change the realities of Afghan life. But Afghans themselves re-shuffled the cards and created new opportunities on April 5. Let them not be squandered.