In order to grasp today’s political situation in Indonesia, it is worth taking a look at its troubled history.

On October 20, 2014, Joko Widodo, often referred to as Jokowi, was inaugurated as the seventh president of Indonesia. Since the country’s turn toward democracy is still less than 20 years old, he is the fifth democratic president and only the second one directly elected by Indonesians.

As is often the case with young democracies, the 2014 presidential election was accompanied by various returns to authoritarian rhetoric and practices by some political stakeholders. In the end, Jokowi, the first Indonesian president who does not stem from the political elite of Suharto’s New Order, won by a slight margin.

Indonesia’s contemporary sociopolitical developments can only be fully understood when one bears in mind the nation’s historical background. The problems Indonesia has faced over the past couple of years in terms of democracy development are to be expected for a country of diverse peoples, who from one moment to the next were asked to develop a unitary national consciousness after the nation proclaimed its independence in 1945.

The Road to Independence

Indonesia has had to deal with many political crises since independence. In terms of population numbers, its potential is breathtaking. Encompassing thousands of islands that cover an area as wide as the European Union with about 240 million inhabitants, in recent years the country has often been hailed as an example for developing nations. Consequently, however, every time the country hits a bump on its road to democratic consolidation, observers are quick to scrutinize its lack of performance without regarding the contextual circumstances that mark Indonesia as a troubled nation.

Before the Dutch East Indies were occupied by the Japanese during World War II, the archipelago had been under expanding colonial influence, first by the Portuguese and then more systematically by the Dutch, for almost 300 years. When the Japanese army easily defeated the Indies’ allied defenders in 1942, the narrative of the supremacy of white races was shattered. Before that, plans of sovereignty had been restricted to the small circle of Indonesian elites that only held little political power. Intending to use the local population in a potential future fight against the allied powers, the Japanese Empire equipped and trained some groups to become militias. Although allied troops never got into any large-scale fighting against the Japanese military on the archipelago, these militias proved to be a significant hindrance to Dutch plans to recolonize the Indies, an enterprise in which they were supported by British troops that, ironically, mostly consisted of South Asian regiments. 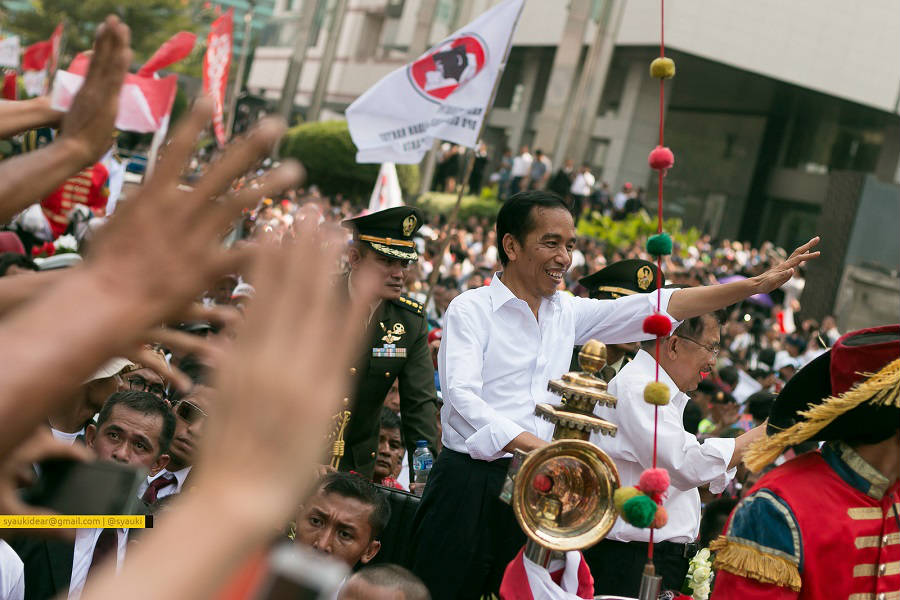 In the first years after the Japanese surrender of 1945, a stalemate developed, as neither the colonial troops, nor the mostly discordant anti-colonial movements and militias were able to decisively defeat one another. This changed when the group around Sukarno, Indonesia’s first president to be, stood firm against a communist uprising at Madiun in 1948. With this action, the struggling Indonesian independence movement gained international support, especially from the United States, who was now eager to support political groups with firm anti-communist credentials. As a result, on December 27, 1949, Indonesia was internationally accepted as an independent nation, containing more than 200 distinct peoples and languages, which had never existed before in this form and within these borders.

In the following years, Sukarno established his reputation as a foreign policy president and as the founding father of the nation, for which he is still renowned in today’s Indonesia. Acknowledging the problems accompanying Indonesia’s diverse socio-cultural composition and the need to unite the nation while delivering on the necessities for economic development, Sukarno relied heavily on his anti-colonial nation-building rhetoric. His active role in having Indonesia host the Bandung Conference in 1955 and in the subsequent founding of the Non-Alignment Movement (NAM), which were supposed to show newly independent states an alternative to the two ideological and political power blocs during the Cold War, was also meant to project Indonesia’s international prowess to both domestic and foreign observers.

During these first years, based on the constitutions of 1945 and 1949, Indonesia was a de-facto democracy on paper; although, of course, democratic rights were hard to implement due to the population’s lack of general education or knowledge of good institutional practice. In 1955, however, Indonesia’s first democratic attempts were curbed when Sukarno introduced “Guided Democracy.” This was a political system that ostensibly aimed to improve the weak points of an overly free democracy, but it was really intended to secure Sukarno’s grip of state power. In effect, “Guided Democracy” installed a dictatorship by abolishing basic democratic rights that were formerly guaranteed in Indonesia. Meanwhile, the official state ideology of Pancasila, which referred to the five main principles the Indonesian Republic was to stand on, was a useful tool to keep any form of dissent at bay.

Among the political stakeholders of the country at that moment in time, Sukarno had lost some of his authority and was losing control over the two most important social forces: the military (TNI) and the Communist Party (PKI). The former had played a major role since the fight for independence. The concept of Dwifungsi (double function) explicitly expected the military not only to act as a defender of the nation, but also as an active sociopolitical player, leading to many high-ranking officers also holding elite positions in politics. The latter had become a major force in the 1960s, as Indonesia’s economic problems made communist or socialist ideals an almost logical choice for both the rural and urban masses. 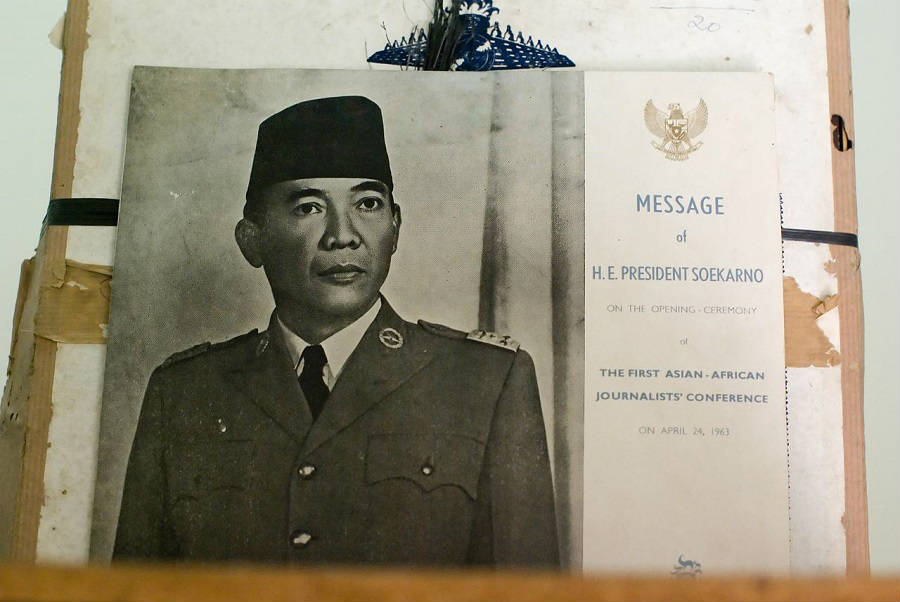 In retrospect, it is fair to say that from 1955 onward, Sukarno’s government was in clear decline. With his increasingly aggressive Konfrontasi (confrontation) rhetoric against major Western powers and Malaysia, whom he saw as a “Western puppet,” Indonesia’s first president attempted to steer public attention away from the increasingly problematic domestic situation both in economic and political terms. Following this logic, Indonesia’s enemies were to be found on the outside, which meant the diverse social and ethnic groups within the nation should close ranks and submit to his rule.

In 1965, Sukarno’s game of playing the two forces against each other failed drastically, as first the Communist Party attempted a coup d’état, which was then directly countered by the military. In the chaotic situation that followed, mass killings legitimized as actions against communists took the lives of up to 1.5 million people within a couple of months. There are many rumors about Sukarno’s own role and that of major foreign powers like the US, China and Russia in these events. As a matter of fact, Sukarno had started a gamble that he had lost with severe consequences for the nation. The military emerged as the dominant power with Gen. Suharto now becoming Indonesia’s second president.

From “New Order” to Democracy

Suharto’s authoritarian rule was to last for more than three decades. It was only in 1998, as a consequence of the Asian financial crisis and the drastic downward trend, that student protests for more political freedom became mass uprisings that eventually brought down Suharto’s Ordre Baru (New Order). Right from the onset of his presidency, Suharto was rigorous in streamlining politics and society. Pancasila continued to be the easy reference to legitimate authoritarian politics, while the acronym “SARA” stood for the tip of the iceberg of an effective system of self-censorship that was installed among Indonesia’s media, forbidding them to report about matters that could ignite religious, ethnic or any other sort of open dissent. Therefore, arguing with Javanese values, the Suharto regime managed to implement a political culture of self-restraint.

When the New Order finally broke apart in 1998, it was almost logical that a political power vacuum developed and observers feared a “balkanization” of Indonesia. Due to a few lucky circumstances, domestic and international pressure for democratization, and the fact that the Suharto cronies were in disarray, transitional President Habibie’s government was able to initiate many new laws to open up the political system. Suddenly, political groups and the media had the freedom to speak their minds. Naturally, this did not mean that all social actors worked hand-in-hand toward democracy. After a short time of orientation, new stakeholders attempted to appropriate the new freedoms for private gain and the old political actors started fighting for their shares again. Since Reformasi (democratic reform process) started, therefore, democracy has been subjected to an up and down process in Indonesia.

The traditionally strong role of actors like the military is hard to overcome. In the process of democratization, the DPR, Indonesia’s parliament, abolished the military’s right to a secured number of house seats. As had been the case during the New Order, however, there remain many stakeholders in Indonesian politics who have a strong military background. Jokowi’s predecessor, Susilo Bambang Yudhoyono, and his major opponent in the presidential elections, Prabowo Subianto, are cases in point. The case of Indonesia illustrates neatly that the legacy of decades of authoritarian rule cannot easily be shed. It is natural that the old “New Order” structures have been lingering on in the shade.

When Indonesia won its independence and the country took on a new form, the nation had to be invented. An “idea of Indonesia” had to be brought to life and an “imagined community” needed to be developed. Sukarno and Suharto both followed their oftentimes highly disputable respective ways that, nevertheless, left a heavy imprint on Indonesia’s political culture. Thus, when dealing with Indonesia’s political situation today, tact is required. While some people already see Jokowi as the Indonesian Obama who started off with promises of change and then became, in the opinion of many, a lame duck, it might well be worth observing the situation a little longer. It is conceivable that Joko Widodo’s government cannot from one moment to the next change Indonesia’s domestic political routines that he himself criticized as being infused by corruption, collusion and nepotism. Considering the nation’s most eventful history, however, his victory in the elections as a political newcomer with a democratic idea of Indonesia’s future gives the country its next chance for an attempt at democracy. 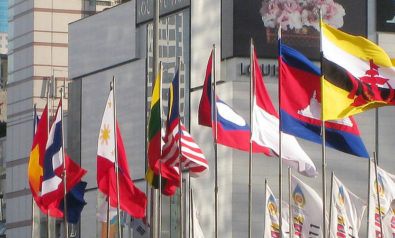 Democracy and Southeast Asia are Not Incompatible 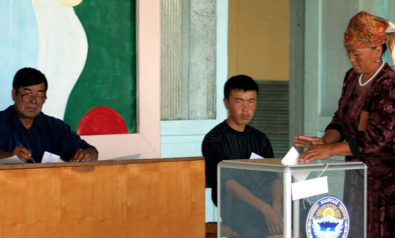 Democracy in Asia: A Glass Half Full?