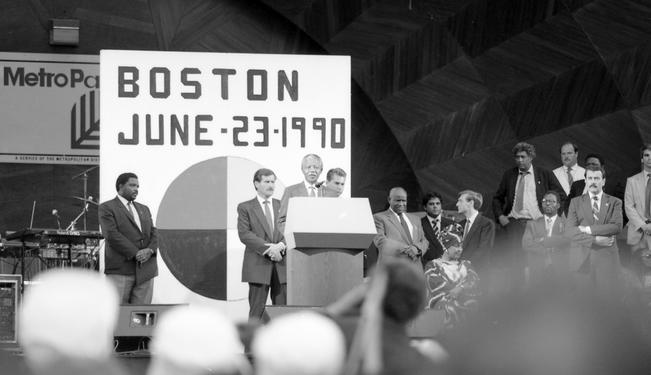 A eulogy for a leader who uplifted humanity.

On Sunday, we bid a final farewell to this generation’s most beloved leader. Nelson Rolihlahla Mandela, a man for the ages, will be laid to rest. Leaders and dignitaries from all over the world have flocked to little-known Qunu, in South Africa, to see Mandela return to his roots, to the home of his people and the place of his childhood. Last Tuesday, a sea of world leaders arrived in Soweto to pay their final respects to a leader whose appeal transcended race, borders and beliefs. People turned up in the thousands and even a heavy downpour did little to dampen their spirits.

The Boy From Qunu

Mandela was a worthy heir to Mahatma Gandhi. He lives on in the hearts of many. His story is woven in bright colors that will refuse to fade with time. So profound was his influence and the reach of his example, so consummate was his work in altering the arc of history that the whole world mourns his loss whilst celebrating his life.

Throughout generations, in Africa and around the globe, many have heeded the call to serve and fight for freedom. Yet some precious few stand apart. Mandela is unique even in this group. His courage of conviction was such that he was prepared to die. His loyalty to those around him was absolute. His integrity was legendary. Despite its best efforts, the apartheid regime could never co-opt him. He carried himself with much pride and grace. Yet he was modest, engaging and courteous. He was Africa’s most celebrated son, and one of the greatest leaders to have ever graced the earth.

In 1918, Africa’s most challenging century bore its greatest son in Transkei, South Africa. “Rolihlahla,” which means troublemaker, rose to face the harsh repression of apartheid facing his people. Burdened by the weight of destiny, he stood up to be counted and became a willing advocate against the senseless chains clamping down on the rights of his people. A man with a wealth of flaws, he chose to pick up the gauntlet of a people’s struggles and carry the burden of their hopes. By so doing, he acquired the status of a saint.

He lived up to the immortalized words that he uttered at his trial before conviction:

"During my lifetime, I have dedicated myself to this struggle of the African people. I have fought against white domination, and I have fought against black domination. I have cherished the ideal of a democratic and free society in which all persons live together in harmony and with equal opportunities. It is an ideal which I hope to live for and to see realized. But… if needs be, it is an ideal for which I am prepared to die."

Throughout his 27-year incarceration, Mandela remained unbowed by the backbreaking inclement habitat designed to shatter his resolve for the realization of an indivisible free nation. Through many a long day and night of confinement and the punishment of hard labor, he soldiered on and carried forth the indefatigable hope for a brighter tomorrow. In detention, he refused to settle for the allure of anything less than the Promised Land. Eventually, it was Mandela’s captors who recognized that they were in chains and set free a man whose spirit was always free.

Like the biblical David against Goliath, he unflinchingly took on the behemoth of intolerance and domination. He slayed the beast with the help of others — some well-known like Oliver Tambo, some who lived to see the day and fruits of freedom, and some who paid the ultimate price in terms of their lives for emancipation.

Father of the Nation

Upon his release, he opened the iron fist of oppression and by shaking hands with it, melted the grip of its ideology. By his indomitable courage, Mandela led his country to freedom. His empathy, compassion and magnanimity saved it from chaos, violence and civil war. A new and bright South Africa was thus born and Mandela came to be regarded as Tata, the father of this nation.

A nation is only as strong as its foundation. Mandela was the catalyst that brought divergent and apprehensive groups onto the negotiating table to hash out a new constitution. The negotiations demonstrated that unity was possible, true freedom for all was accessible, common ground was ample, and dialogue indispensable. Mandela inspired the promulgation of one of the most revolutionary constitutions in the world. Under South Africa’s constitution, the inherent right of equality of all people is sacrosanct — civil and political rights and socioeconomic rights are intrinsic.

During his "self-imposed" single-term presidency, Mandela focused on the task of uniting stubbornly disparate groups and peoples under the banner of a rainbow nation. Recognizing that healing and restoration was paramount, his government set up the South African Truth and Reconciliation Commission to enable the nation to examine and acknowledge its painful past. Citizens were encouraged to embrace each other in the light of forgiveness, and to create a harmonious and inclusive society.

Mandela demonstrated by word and deed that all races could coexist in a unified country, sharing the same fundamental values. The powerful symbolism of his incarcerators sitting in the front row at his inauguration, shall forever prove that the power of forgiveness enables people to bridge any gap and heal any scar.

By voluntarily serving for only a single-term — a rare act in history — Mandela set an example to leaders across the globe, that power was but a means to an end and that leaders were merely servants of their people. He showed that for democracy to flourish, power must be relinquished even before one’s allotted constitutional mandate. He demonstrated that stepping down from power is a moral imperative, even if the masses clamor for a leader to continue in office.

Across the globe, Mandela stood for the oppressed and downtrodden with disregard to political correctness. He made no alliances out of political expediency. Instead, he championed the cause of peace and security, freedom and self-determination, and the recognition of the inherent rights and dignity of all humanity.

Admittedly, as with all great leaders, it is important to interrogate all aspects of Mandela’s legacy. Even though he was a model statesman and charmed the world and a nation, he was far from a model father to his children. He is known to have engaged in infidelity, and his three marriages bring to question his commitment to the institution.

He regretted not having done more to stem the tide of HIV infection in South Africa while he was in office. During the freedom struggle, he abandoned Gandhian non-violence, and was the co-founder of Umkhonto we Sizwe (Spear of the Nation) — the armed-wing of the ANC — which engaged in acts of violence.

The man maketh the legend. Nonetheless, it is important to distinguish between the man and the legend. As a man, Mandela is thus blameworthy. His blemishes must be spoken of for the wider society to cite, criticize and learn from, as well as for all to appreciate the fact that he too was immensely flawed.

Mandela’s courage in fighting against injustice and his compassion — even for those who wanted him dead — makes him a great man. A tall and handsome man, he was that rare book that could be judged by both its cover and its contents. At once, warm, humble and delightful to all and sundry who were fortunate to meet him in person, Mandela was also unremitting, ferocious and singular in the quest of his life’s mission.

As the African story rattles on, with its record of less than stellar leaders, Mandela will forever be a source of pride to his continent and a symbol for all humankind. His story shall be told in schools, at the kitchen table, in the open fields, and by the fireplace. Songs and books will continue to be written about him. He leaves but lives, especially through the ideals of peace, love, liberty, equality and harmony for all.