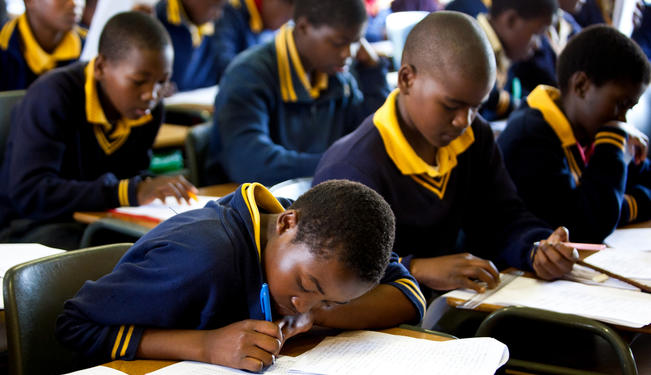 North and sub-Saharan Africa are experiencing a demographic youth bulge. However, there is a severe mismatch between the skills possessed by young workers and those demanded by employers. The education system needs to be restructured to build the skills needed to compete globally.

Over the last decade, six of the world’s ten fastest-growing economies were in sub-Saharan Africa. Yet, there are troubling indicators that this exponential growth has not resulted in robust growth of “good” jobs. In other words, those offering higher wages and better working conditions – especially for the young.

Exacerbated by a delayed demographic transition, the share of youth (aged 15 to 24) in Africa – both north and south of the Sahara — has been rising over time and is now higher than in any other part of the world. This demographic bulge offers the possibility of a growth dividend. As in the case of East Asia, a rapidly growing work force can be combined with capital and technology.

But it can also represent a major threat. Africa is not creating the number of jobs needed to absorb the 10 to 12 million young people entering its labour markets each year, and as recent events in North Africa have shown, lack of employment opportunities in the face of a rapidly growing, young labour force can undermine social cohesion and political stability.

Seen from this perspective, employment policies cannot focus only on the supply side of the labour market. Indeed, while labour market reforms and active labour market policies can make a contribution to solving the employment problem, the greatest traction is likely to come from policies and public actions designed to accelerate the growth of sectors with high value added per worker. Ultimately, from a strategy for structural change.

On the face of it, sub-Saharan Africa does not appear to have a severe employment problem. In 2009, the overall unemployment rate was 6.4% compared with a global average of 4.7%. The regional unemployment rate has been relatively stable since 2000 and ranks third, behind the Middle East, North Africa, Europe and Central Asia.

Between 2004 and 2008, North and sub-Saharan Africa had some of the most employment-intensive growth in the world. According to data from the Africa Development Bank, average employment elasticities of growth were 0.7 and 0.5, respectively. Globally, the employment elasticity of growth is estimated to be about 0.3, and it ranges from a low of 0.2 in East Asia to a high of 0.9 in the Arab Middle East.

Based on the International Labour Organisation definition, youth unemployment rates in many sub-Sahara African countries are relatively low compared to world averages. Worldwide, there is a fairly regular relationship between the overall rate of unemployment and the unemployment rate of the young.

With almost 200 million people aged between 15 and 24, Africa has the youngest population in the world. In a majority of African countries the young account for more than 20% of the population. In 2011, the ten countries in the world with the youngest populations were all in Africa. While the proportion of young people (15 to 24) is projected to decline globally, it will stay at the same level in Africa for the foreseeable future.

At the projected rates of population growth, the number of young people in Africa will double by 2045. By 2030, Africa is projected to have as many youth as East Asia and by 2050 it could also exceed the youth population in South Asia.

The rapid growth of the labour force implied by Africa’s demographic transition will pose serious challenges. According to a McKinsey survey conducted in 2010, by 2040, Africa will have the largest workforce in the world, surpassing both China and India.

This offers an unrivalled opportunity for economic and social development, if these new workers can find places in the productive sectors of the economy. However, it could also present a significant risk, if Africa fails to create sufficient economic and employment opportunities.

However, the role of education will prove paramount. There is a severe mismatch between the skills possessed by young workers and those demanded by employers. According to the World Bank, despite the increase in enrolments in most sub-Saharan African countries – especially at the primary level – the out-of-school population has very low educational attainment. Thirty-six percent of the 15- to 24-year-olds in sub-Saharan Africa have never attended school. Only 28% have completed primary school, and only 8% have completed secondary school. This means that about two-thirds of all young workers in the labour market — about 95 million young people — lack the basic skills needed to be competitive in the labour force.

The key to reducing unemployment and informality – both among the young and in general – is rapid growth of good jobs. These are employment places capable of paying good wages and building skills. If the history of those countries that have successfully sustained growth, job creation and poverty reduction is any guide, creating such good jobs will require significant structural change. Economies that have made the transition from low-income to high-income status typically have experienced significant changes in their economic structure.

Education reforms are essential to improving the skills and problem-solving capacity of Africa’s workers. Perhaps the most urgent reform is to increase the emphasis on post-primary education. In the longer term, the education system needs to be restructured to build the skills needed to compete globally.

*[This article was originally published by Thought Leader.]