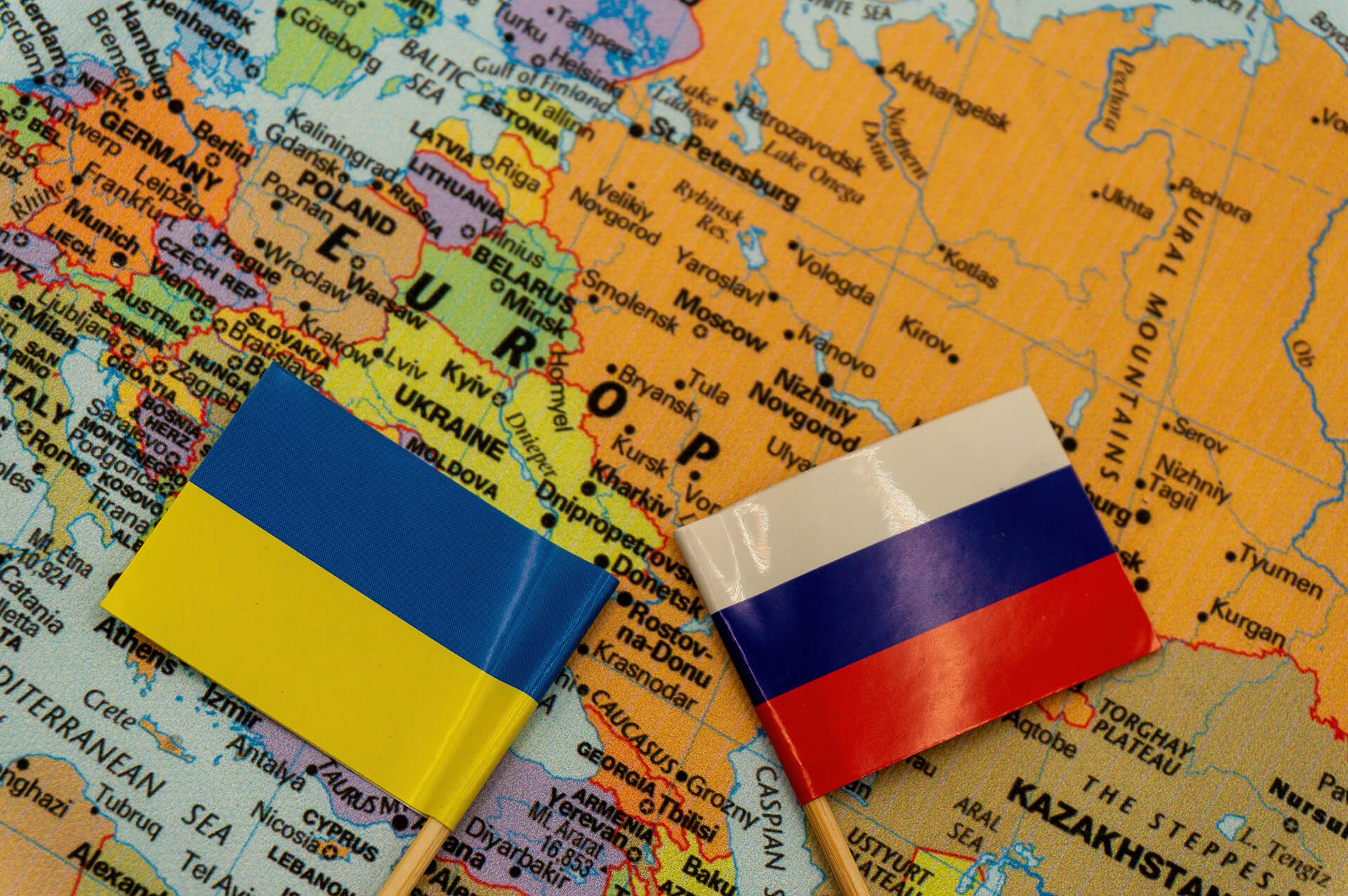 The Ukrainian and Russian flags are placed on a map of Europe.selective focus on the smaller flags top. International situation theme © evan_huang/shutterstock.com

Experts are arguing as to what lies around the corner for Russia after a so-far disastrous war. In western capitals like London and Washington, many believe that the Vladimir Putin regime could fall. They believe that Russia could disintegrate. In places like India and China, many take the view that most of the news about the war is western propaganda that has to be taken with a handful, not a pinch, of salt. They believe that Russia will overcome its initial setbacks, take over the Ukrainian coast and leave Ukraine as a landlocked rump state.

Atul Singh on the Political Consequences of Russia-Ukraine War

In this episode of FO° Insights, Atul Singh makes sense of what is going on. You can watch the video above and/or read what he has to say below. The transcript has been lightly edited for clarity.

Is this the second round of the 1991 Soviet collapse?

The Russian Empire was a hastily-built contraption. Russia expanded east to the Pacific just as America went west to reach the same ocean. But the American Empire was built on sturdier grounds, while the Russian one was a helter-skelter, disorganized affair.

The Soviet Union that emerged in 1917 collapsed in 1991. Now you could have places like Dagestan, Chechnya and other regions secede. If and this is the big if if the military defeat is catastrophic. If the casualties are too high, which so far they are, but they are not yet too too high, and if people start losing the shirts off their backs and start suffering for food and basic services, then Russia could fall apart.

Furthermore, Russia is ruled by a kleptocratic regime. It is not one built on ideology. Unlike Joseph Stalin, Vladimir Putin is not delivering economic growth or tremendous industrialization. In fact, Russian factories are reliant on spare parts from around the world. Russians do not make silicon chips, so they can’t do much advanced stuff without help from others. So yes, Russia could collapse, but the jury is still out whether it would.

Has Vladimir Putin run out of rope?

Atul Singh: My personal feeling is eventually Vladimir Putin is bound to go because most dictators lose touch and dictators who end up in wars that end badly don’t seem to stick to the saddle for too long. This war isn’t going very well for Putin, so he may have run out of rope, and the reason may not necessarily be just the war. The reason really might be the fact that he has presided over a regime that has engaged in massive theft. And there is no real moral or ideological underpinning to his regime.

Putin’s regime is a fake tsarism, it’s tsarism without the tsar with its private properties, with its fancy castles, with oligarchs and an absolute concentration of power. At the end of the day, Putin’s regime is not like the Soviet regime which had true believers. It is all built around a nostalgia for past grandeur and that might end in defeat in Ukraine, or let’s say a pyrrhic victory, which is often not much better.

Russia has made its name as a mighty military power, exporting its T-90 tanks, S-400 missiles, Sukhoi Su-30s and whatnot to many countries around the world, including China and India. Now, Russian factories will have to work overtime to supply their own military. Also many of the engines for Russian military equipment came from Ukraine. In fact, that is what the Indians are finding out and Russia will find it very difficult to ramp up its production and supply other countries.

Russia’s strength as a defense exporter is going to weaken. The country is certainly going to be on its back, if not its knees, and should things go very badly. Of course, Russian kit now has a bad reputation, given the mauling it has had, but should the war go even more badly, the days of Russia as a top arms exporter might be in doubt. The Chinese might be looking at Russia, or the Russian disaster, a bit more cheerily than the West. They could step in to supply the gap.

Will Russia fall under China’s thumb?

Well, that is the nightmare for a lot of my friends in the Pentagon. I have heard so many arguments that the real enemy is China and Russia is a distraction. Some of these ladies and gentlemen believe China is supporting Russia through back channels and shady deals are propping up Vladimir Putin.

Bit by bit, a giant pipeline that is being built to supply Chinese energy needs. This will supply Russia with much of the cash to keep going over a period of time. Russia is increasingly too beholden to China. If Beijing emerges triumphal or triumphant, we could get something like a Germany and Austro-Hungarian Empire alliance before World War I.

This could then take on the West. In fact, this Eurasian alliance could emerge as a challenger to Washington and European capitals. Of course, Russia and China have thorny border issues. They have a long border. They also have geopolitical rivalry in Central Asia.They have had tiffs, even under communism when they were supposedly under the same ideology. But pressure from the West might be pushing them together, certainly right now. The Russians need the Chinese more than the Chinese need the Russians. So Russia is certainly going to be under China’s thumb.

What lies ahead for Russia?

A bleak winter, I suppose, after a tough summer. Russia is not in the best shape. Yes, its ruble is not falling to the same degree anymore — they have backed it with gold. Yes, Russia has a fortress economy. Yes, it can grow wheat. Yes, it has bread and oil. But at the end of the day, Russians have not really invested in their own country and manufactured stuff. The ability of a country to fight a war and win a war depends on its ability to make things, and that was what Joseph Stalin’s Soviet Union was good at for all its catastrophic loss of life and the killing of millions.

Under Vladimir Putin, Russian oligarchs have bought yachts, properties in London and beautiful villas in Monaco and elsewhere. And Russians don’t make stuff anymore. They export commodities. So Russia can certainly cause a giant crash of the global economy. It can send inflation ricocheting around the world. It can cause collapse of regimes such as in Egypt and even countries such as Lebanon.

However, Russia does not make anything advanced anymore and it doesn’t produce silicon chips, which is important for the next generation of manufacturing. So, the future for Russia is bleak, and there is certainly going to be a massive shakeup in the way Russia is run and perhaps even the way Russian borders are drawn when the dust settles.