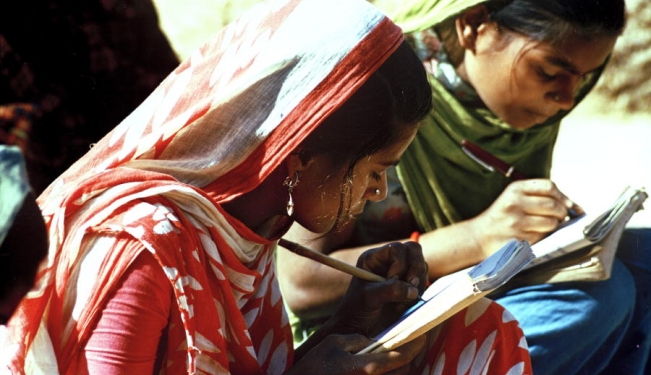 In Bihar, the state with the lowest female literacy rate in the country, things have changed dramatically.  All indicators of governance have improved dramatically.  School enrolment has shot up, crime has decreased dramatically and roads have been constructed all across the state.  Chief Minister Nitish Kumar, in power since November 2005, is the person who deserves the credit for this turnaround.

One of the policies Nitish instituted to boost literacy was to provide free bicycles to female students in high school.  His rival and his predecessor as Chief Minister, Lalu Prasad Yadav, immediately responded by declaring “I will provide motorcycles to them.”  As Nitish pointed out, Lalu’s scheme had two major flaws.  First, he did not factor in how a poor rural family would afford the cost of petrol, which is extremely expensive in a country with high petrol taxes.  Second, Lalu did not recognize that most students were legally ineligible to ride motorcycles: one has to be eighteen to get a driving licence in India.

Lalu’s statement was a classic reflection of the fifteen years he spent in power, during which Bihar experienced arbitrary and lawless abuse of power before Lalu and his wife Rabri Devi were voted out of office in 2005.   The 2010 election saw Lalu’s party, the Rashtriya Janata Dal, torn asunder in the polls.  It won just 22 seats and could not even qualify for constitutional opposition party status which requires a minimum of 24 seats in the 243 member state legislative assembly.

In ancient Greece, Lalu’s reign would have been called a tyranny. It wrecked the rule of law.  Laws were broken with impunity and the regime became infamous for enriching itself at the expense of the taxpayer.  Law and order broke down, roads were allowed to degenerate into potholed pathways, hospitals lacked doctors, schools lacked teachers and grains distributed through ration shops were far from optimum quality. Occasionally, honest government officials were murdered.

Bihar saw a massive exodus during the Lalu era.  Students left for higher studies to universities outside the state, labour fled to find work in other states with economic growth and professionals migrated to start their careers in larger metros, none of which lie in Bihar.  It was a sorry state of affairs for a state that has a proud history as the birthplace of Buddhism, as the location of the ancient world’s greatest university, Nalanda, and as the centre of the legendary Mauryan Empire, the dynasty of the legendary Emperor Ashoka.

Lalu’s state was not just inefficient; it was rapacious and actively conspired against its citizenry. Police overlooked crime, vested interests siphoned off money earmarked for various projects such as the infamous USD 200 million fodder scam and investigations into corruption were hindered and stymied.  Lalu created a political machine that ran the state as his personal fiefdom with no accountability to the people.  It is remarkable that he and his wife remained in power for nearly fifteen years from 1990 to 2005. Supporters, attracted to his rustic charm, allude to Lalu as a leader of the downtrodden in a feudal state, while cynics accuse his cronies of rigging the elections through perennial booth capturing, an activity in which electoral ballot boxes are stuffed with pre-marked voting slips. The truth is probably somewhere in between these two perceptions of Lalu. While Lalu did   symbolize the rise of the downtrodden in a deeply feudal state, he also practised deeply divisive caste politics in much the same way that Mugabe has practised divisive identity politics in Zimbabwe.  Things finally changed in 2005 when voters reacted to the blatant economic mismanagement and collapse of law and order by voting in Nitish Kumar.

Under Nitish, Bihar’s turnaround in the last five years was achieved in a fairly non-confrontational and non-grandiose manner.  Special economic zones did not suddenly pop up in the state nor did large industrial houses pander for much heralded investment.  Nitish did not lead any business delegation for a round-the-world trip to market the state and nor did he launch a national advertisement extolling the wonders of Bihar.  One could attribute the government’s low profile success to Nitish’s approach as a hands-on administrator tackling the fundamental governance problem in India; that of ensuring transparency and accountability of the government.

To address the dogged problem of medical hygiene in hospitals, Nitish decided that the only way to publicly monitor whether hospital bedding was being changed daily was to have coloured sheets to match the day of the week.  With the equally popular bicycle scheme, Nitish found a quick and effective way for students to reach school and lowered the dropout rate for female students whilst leading a drive to expand the construction of school buildings and the recruitment of teachers.  Independent surveys suggest little waste in these innovative schemes of using cash payments for bicycles and uniforms.  This is attributed to the fact that the cash payments are for specific purposes and because there exists social pressure on families to use that payment for its intended use.

The most dramatic change observed in Bihar has occurred in the realm of law and order.  During the Lalu era, the police was ineffectual because of political interference.  People had begun to employ private bodyguards to guard themselves against extortion and kidnapping.  Travelling after dusk was hazardous and families that were brave enough to do so had to travel in convoys.  Such was the lack of public safety that traffic intersections were invariably deserted at night and only the naive would stop at them.  Nitish has largely succeeded in changing this environment to such an extent that even his political opponents like the Congress Party, begrudgingly acknowledge his achievements.

In the realm of Bihar’s development, numbers speak for themselves. Under Nitish, 100,000 additional school teachers have been appointed, versus none in the previous ten years.  Furthermore, 10,000 kilometres of roadway, representing 25 percent of the state road network, have been constructed and 25,000 out of 75,000 kilometres of electricity transmission wires are being replaced to reduce the power distribution loss which was at a soaring 38%.  The Central Statistical Organization (CSO) reports that between 2005 and 2009, Bihar’s GDP grew at an annualised rate of around 11 percent, making it one of the top two fastest growing states in India.  Prior to Nitish, Bihar’s growth not only woefully lagged the national average but the state was also ridiculed as BIMARU, the sick one showing anaemic and negative rates of growth.

Admittedly, there are those who question the veracity of these development statistics.  A few experts, almost all of whom are based outside Bihar, claim to have found discrepancies in the reporting.  Others allege that the improved law and order situation does not coincide with all types of crime going down under the Nitish government.  While the debate on numbers continues, what is striking is what people living in Bihar have to say.  Ground realities in Bihar have changed.  This is not only evidenced by numbers pertaining to Bihar but also developments outside its borders.  Textile factories in Haryana are witnessing a steady decline in the inflow of Bihari labourers.  Bihari taxi drivers in metropolises are beginning to return to Bihar and work fewer months outside Bihar than they originally did because of the prospects of improved earnings back home.  Flight traffic at Patna airport has increased by more than five times since Nitish came into power.  Travel time between Patna and the rest of Bihar has been cut in half and new businesses have finally started establishing themselves in the state.

Apart from all the tangible improvements and economic development, Nitish has engendered a massive change in Bihar’s public psyche.  Bihar had become cynical, the butt of national ridicule and a place of despair.  Today, Biharis have renewed their optimism and confidence.  People have found new belief in Bihar’s future and this surge of confidence is transforming the ancient state.  For this reason alone, the great Bihar turnaround is worth celebrating.