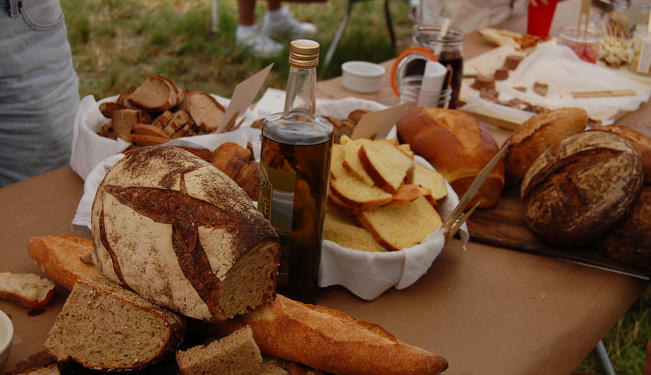 A look at the relationship Germany has with its favorite food.

“Give us this day our daily bread.”  No other nation seems to have taken that line from the Lord’s Prayer so much to heart as the Germans. There are probably few other nations that get stereotyped for their food as much as Germany, including less flattering nicknames for its people, such as krauts and kartoffeln (potatoes). But bread is more than just food; it is part of German culture. Every German eats an average of 53 kg bread per year. No wonder, since there is such a big selection to choose from: Germany is the nation with the biggest variety of bread in the world. For a long time it was estimated that there are 300 varieties of bread in Germany, but “The German Association of Bakery Trade” has recently tried to tackle that assumption: it has launched a website where bakers can register the bread varieties they are selling in their stores. By doing so, the association wants to make sure that the variety of German bread is awarded the status of being one of the world’s intangible cultural heritages by UNESCO. There were 2,753 kinds registered at the time of writing and the number keeps on getting higher every day.

Bread is omnipresent in Germany.  There are more than twice as many bakeries as pharmacies and if you google the words “bread” and “beer” in German, the latter only gets a third of the hits of the former. There is a quite successful German band called Fettes Brot (fat bread) and one of the heroes of a German TV channel for children is a speaking, notoriously depressed puppet in the shape of a tin loaf called Bernd das Brot (Bernd the Bread).

The love story between the Germans and their bread reaches far back in history even though it was the Egyptians who initially started flour milling and bread baking more than 5000 years ago. From Egypt it soon spread to other parts of the world and quickly reached the area that is now Germany. The reason why Germany has developed such an expertise in baking bread is first off all the quality of its soil which is not only excellent for growing wheat but rye as well. Additionally the territory that makes modern day Germany used to be highly decentralized and consisted of various  near-autonomous entities. These entities maintained their own cultural identities and habits which often included bread recipes.

The success of German bread is not limited to Germany though. Other countries seem to have acquired a taste for the German loaves and buns as well. There are German bakeries in almost all large cities of the world including London, New York and Shanghai. They are not only places where locals can indulge in exotic taste experiences, they also serve a need for many German expats for whom bread is among the things they miss the most. Berthold Brecht while being in exile in the US stated in his diary in 1941: “There is no proper bread in the States and I like my bread. My main meal in the evening is bread and butter”.

How much the Germans love their bread is illustrated with how eager they are to defend the values attached to it. When it became known to the public that Munich-based baking company Müller had to shut down one of its factories because of bad hygienic conditions, it created unbelievable outrage. The media covered the scandal extensively, describing every little detail of the contamination in the factory. Franchise branches of the company even had to hang up signs in their windows, saying that they weren’t selling Müller products anymore. Ironically enough, when only one month later the poultry company Wiesenhof also had to temporarily close one of its slaughterhouses for hygiene reasons, the outrage was not even remotely close to what Müller had to face. It seems that people did not expect anything different from a poultry company that had been singled out for the conditions in its factory farms and slaughterhouses before. When one food scandal quickly follows another people probably develop a kind of tolerance towards food companies’ misbehavior. But this tolerance seems to end when the Germans’ most loved staple food is at stake. People felt cheated by Müller, because for many Germans, bread and the baker’s trade are still associated with key values such as honesty and integrity. A violation of these values therefore deserved the harsh judgment the baking company had to face.

Traditions are changing and the last few years have seen a new trend in the German baker’s trade: self-service discount bakeries are popping up in almost every city in the country. Their breads are produced in huge factories and only get crisped up in the local branches. They may offer low prices and convenient opening times but their products are often considered to lack taste and their competitive prices could force many small artisan bakers out of business. A scandal like the one Müller experienced might be a good point to rethink priorities in a country, where food is as cheap like almost nowhere else in Europe. Maybe it is a good time to put less emphasis on price and more on quality and to appreciate bread for what it is: a cultural heritage, at least for the Germans.