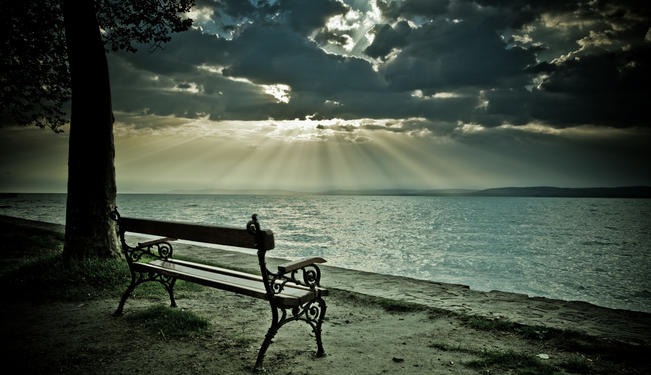 What does the answer to the question “Does God Exist?” mean to you?

“Where is the graveyard of dead gods?” H.L. Menken famously asked. Before the 20th century’s secular dictatorships stomped out the idea of religion as an “opiate of the masses,” there have been many attempts to kill mankind’s heavenly father, Friedrich Nietzsche’s declaration of his death being perhaps the best known.

Yet today, as religious conflicts continue to rage around the world, issues such as abortion, gay rights and freedom of religious expression dominate mainstream politics, and fundamentalist theologies continue to produce a steady flow of disciples ready to die and kill in his name, God seems to be as real as ever before – if not more so.

The argument for and against the existence of God can be surmised by astronomer and mathematician Sir Fred Hoyle’s controversial gambit that the probability of life originating on earth is “comparable to the chance that a tornado sweeping through a junkyard might assemble a Boeing 747 from the materials therein.”

Evolutionists use it to emphasize the necessarily gradual development of life through mutation, while those who believe in intelligent design (ID) and creationism (which is not necessarily limited to Christian belief) point to the notion that life on Earth is too intricate, too scientifically perfect, to not have been a product of a higher intellect.

Indeed, many secular scientists such as – most famously – Anthony Flew, after years of research, have come to a shift from atheism to deism, only to highlight the historical schism of interpretation of available evidence.

While some, including Sir Isaac Newton and Johannes Kepler, reconciled their faith with their scientific vocation, others like Charles Darwin, Albert Einstein and Stephen Hawking have probed the complexities of the deist debate.

The origins of modern scientific thought can be traced back to ancient Greece where, in the 5th century BC (a similar theory appeared in India, perhaps a little earlier), Leucippus and Democritus saw the world as composed of basic, indestructible elements – atoms – and a void. These irreducible elements referred to water, air, fire and earth, and were thought to collide with each other to form matter.

The Greek philosophers used this model to counter what Lucretius termed “the ponderous load of Religion’s cruel burdensome shackles.” Yet, around the same time, the Islamic Ash’arite school’s view of atomism described temporary matter controlled only by God, who created the world and everything in it.

Although the arguments for both camps have grown increasingly more detailed and sophisticated, the problem of seeing the same set of data from two different perspectives remains unresolved.

It is difficult to estimate how many different religious denominations exist in the world today, but the website Adherents.com lists over 4,200. While Christianity and Islam retain their place as the world’s most popular faiths, some six percent of the world’s population practices traditional folk and pagan religions.

Newcomers such as Scientology, whose followers believe in the immortal being reincarnated through time and space, or the Jedi Knights (placed seventh on the 2011 UK census), are just two examples of changing belief systems and attitudes. Earlier this year, the first atheist church opened its doors to worshippers in London.

A recent Gallup poll documented a worldwide decline in religiosity, and a Pew Research study now designates “unaffiliated” as the third largest religious group. Countries with the highest proportion of self-professed atheists are mostly located in Asia, with China leading the tables with 47 percent, Japan at 31 percent, Czech Republic and France following closely at 30 and 29 percent respectively.

On the other hand, the study found that religiosity is 17 percent more likely among the poor, and the world’s most religious populations are found in Africa, where at least one in three claim to have experienced a divine healing. As of 2012, more than eight of out ten people identified with a religious group, bringing the number close to six billion worldwide. One in five American Christians expect Jesus to return to earth within their lifetime, and 46 percent of all Americans believe the earth is less than 10,000 years old.

Why is God's Existence Relevant?

One might suggest that belief – or disbelief – in God is a strictly personal matter. It defines an intimate decision of how one chooses to define moral parameters, confront uncertainty and evaluate one’s life.

Yet the argument of whether or not God exists is being fought in the public sphere on a daily basis, and not only between believers and unbelievers, but those who pledge allegiance to different interpretations of the creator and his intentions. Treatment of women, birth rights, scientific research, medical care, education, social cohesion, global wealth inequality are just some of the topics affected by the debate.

Questions leave no answer without a rebuttal. Is there a danger, as Dostoevsky feared, if there is no God, that everything will be permitted? Are there limitations to the positivist, materialist world view? What are the consequences of deferring judicial and social codes to an ancient scripture, and how is a benevolent creator compatible with the world’s misery? And, finally, just for argument’s sake, who designed the designer?