In January 1919, an invite to present a lecture was extended to a leading German intellectual and political theorist Max Weber. The young members of Munich University’s Free Students Union had requested that he elucidate himself on the “vocation” of politics, with the added subtext of threatening to invite Weber’s nemesis, the socialist Bavarian President Kurt Eisner instead if he refused. Despite eventually accepting, Weber decided to reward their underhanded maneuvering by delivering a barbed, mildly sarcastic and roundly depressing lecture that was designed to “necessarily disappoint.”

Naturally, “Politics as a Vocation,” as it was later published, became a seminal work of political science. Despite its tone, the lecture succinctly crystallized Weber’s thoughts on a range of issues, drawing inspiration from the ongoing post-World War I crisis. Many of Weber’s words on what it meant to be a politician in 1919 still echo a century later, when firm leadership has become an increasingly scarce commodity.

Weber highlighted three qualities as being essential to any politician. Passion is the first, but today this quality may be a contentious topic. To the politically disengaged, an overflowing display of passion can be tiring, representative of unanswered mandates and empty promises. There is no shortage of politicians who bring passion into politics, often seen going hand in hand with the rise of populism and right-wing agendas around the world. Donald Trump’s election on the back of an incendiary populist agenda or the political journeys of the likes of Jair Bolsonaro in Brazil and Viktor Orban in Hungary are just the most exuberant examples.

However, it is important to be reminded of the intense passion on the left of the political spectrum, such as Bernie Sanders’ stirring call for a political revolution or that of his French contemporary, Jean-Luc Mélenchon.

However, partially due to the COVID-19 pandemic, we are witnessing a quiet but firm rise in support around the world for technocratic, realist politicians whose merits are judged not on the conviction of their passion, but more on their proven competence. Some names include Sir Keir Starmer, a human rights lawyer now leading the Labour Party in the UK, or the rising star mayor, Vico Sotto in the Philippines, who has been praised for his excellent leadership of Pasig City in the fight against the pandemic. Those seen embracing competence over charisma may become even more popular in the coming decade, perhaps one of the post-populist politician. If passion may one day no longer be one of the most powerful instruments in the politician’s toolbox, then what is its relevance to the modern politician?

The answer is that passion and conviction must always be present to guide a politician’s ethical and moral decisions, which is another form of competence separate from technocratic ability. In “Politics as a Vocation,” Weber suggests that the “politician’s element” was not to simply adopt a moral position and see through its execution, but to have the moral courage to fight for it — something that could not be accomplished without the prerequisite passion to back it up. He drew the comparison with bureaucrats and civil servants, whose lack of “scorn and bias” in their tendency for impartial administration stripped them of a tendency to exhibit passion for their work, leaving them unable to “fight.”

Many politicians, including those in the ruling Conservative Party in Britain under the leadership of Boris Johnson, have been accused of shying away from taking a stand on ethical and moral dilemmas and have simply resorted to “following the science” in taking on the pandemic. In this instance, although the scientific advisers were fully aware of the danger of the impending coronavirus pandemic, they failed to raise the option of a harsher lockdown similar to that implemented in China on the assumption that the British public would protest such measures.

It is difficult to judge whether Johnson lacked the passion to take a moral stand and push for preemptive action or whether he lacked the conviction of the efficacy of a lockdown in the first place. Whatever the case, the British government, “led by science,” presents a perfect example of technocratic politicians struggling with the handling of weighty dilemmas that involve matters of life and death, and demand decisive leadership.

Weber chose responsibility as the second essential quality, empathizing that a politician has to take personal responsibility for his actions to avoid being accused of being a dilettante engaging in politics for no other reason than as a shallow intellectual pursuit. This was another reason why Weber thought of civil servants and bureaucrats as poor material for politics given that their proficiencies lie in the execution of someone else’s decisions, which leaves little scope for personal initiative and the responsibility that it carries.

Weber highlights two ethics guiding the actions of politicians, that of an “ethic of ultimate ends” and an “ethic of responsibility.” The former was a classic utilitarian perspective, where the outcome wholly justifies the means by which it was achieved. Weber situated this in the revolutionary socialist principle of the time that wholeheartedly accepted “some more years of war” in exchange for a revolution, and in his contemporary F. W. Foerster’s maxim that from good comes only good, but from evil, only evil follows. Weber felt that those who followed such an ethic might as well have abandoned any personal responsibility for their actions.

Conversely, the ethic of responsibility demanded that one give an “account of the foreseeable results of one’s action” and embrace the consequences for doing so. What Weber felt was most “genuinely human and moving” was when a politician acted in accordance with an ethic of responsibility whilst simultaneously being cognizant of the ends of his goals without becoming intoxicated with “romantic sensations” of his ideas. Weber visualized a point where a politician would bear the responsibilities for his actions until forced to perhaps pause and say, “Here I stand: I can do no other.”

To give some credit to the UK Conservatives, Weber might have probably approved of their pause in the midst of the COVID-19 crisis. Specifically, he would have pointed out the reevaluation of their responsibilities toward the British public who had firmly voted for Johnson’s brand of populism. As Martin Kettle writes in The Guardian, an “old contempt towards experts, competence and seriousness” has been replaced by a “craving for all three.” Where there was once a “cultural backlash” against liberalism and entrenched elites, the Tories have quietly put aside what allowed them to surge to an electoral victory in favor of a contrasting yet comforting sense of solidarity and level-headed realism.

Weber would not have classified this as flip-flopping or mocked Johnson as being forced to eat humble pie. To him, the Tory party would have been acting in line with his ethic of responsibility.

The third and final quality that Weber identified is the “decisive psychological quality” of the politician: a sense of “proportion.” This refers to the capability of letting “realities work upon [oneself] with inner concentration and calmness.” One criticism Weber had of the politicians of his time was a “lack of distance” stemming from their lack of proportion, and he envisioned the ideal politician’s temperament as “warm passion and a cool sense of proportion [being] forged in one and the same soul.”

To achieve such a temperament, Weber suggests, a politician had to control his vanity. The nature of the vocation presupposes an unavoidable quest for power in the public eye, the embrace of vanity an occupational hazard. However, Weber was careful to highlight the distinction between being objective and cognizant of the “realities” of power as opposed to losing the “distance to things and men,” chasing after the mere semblance of power instead, immersed in conceit.

Moreover, vanity worsens what historian Yuval Noah Harari, in his book “21 Lessons for the 21st Century,” calls a “black hole of power.” According to this principle, in high positions of power, even well-intentioned and level-headed politicians are subject to a pervasive atmosphere of group-think by the people around them: “no sultan can ever trust his courtiers and underlings to tell him the truth.” The solution, Harari writes, is for leaders to venture into areas furthest away from the point of concentration of their power. However, vanity directly obstructs such pursuits of truth.

To illustrate proportion, vanity and group-think, one may consider the example of the Trump administration’s impressive turnover rate. The frequent sackings and resignations clearly highlight the contrasting longevity of Trump’s inner circle of trusted confidants. This circle includes immediate family — the president’s daughter, Ivanka Trump, and her husband Jared Kushner — as well as his social media director, Dan Scavino, and immigration policy chief Stephen Miller, all of whom have staunchly supported Trump’s direction and have had more than their own share of controversies to mirror the president’s own. As those who disagree with Donald Trump continue to be evicted from the White House, a tight ring of unquestionable perspectives has formed around the president that have reinforced rather than tempered his own decision-making. Weber would probably have greatly disapproved of Trump’s “lack of distance” and his unobjective vanity, which has obscured the “realities” beyond the bounds of his small inner circle.

The time in which Weber spoke was a profoundly difficult period for postwar Germany, fractured by the struggle for power between politicians and revolutionaries, and a raging Spanish flu pandemic that would claim Weber’s life in June 1920. All these events colored Weber’s thinking with a distinct pessimism but also instilled in him a desire to temper the mood of his excited and idealistic audience at Munich University with a frank realism about the requirements for pursuing politics as a vocation.

Ultimately, he believed that such realism was a necessity for braving the “polar night of icy darkness and hardness” that awaited a Germany sandwiched between the two world wars. In hindsight, modern society may not necessarily be facing such a dire crisis, but with an increased questioning about whether governments are capable of acting in the best interests of their people, perhaps it would be a refreshing perspective for politicians to revisit the realism that Max Weber had sourly espoused on that January day in Munich. 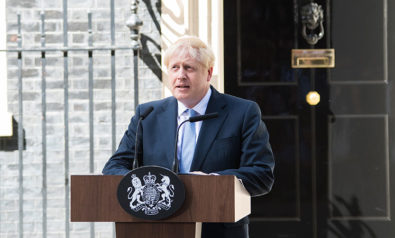 Boris Johnson Takes Britain Back to Square One