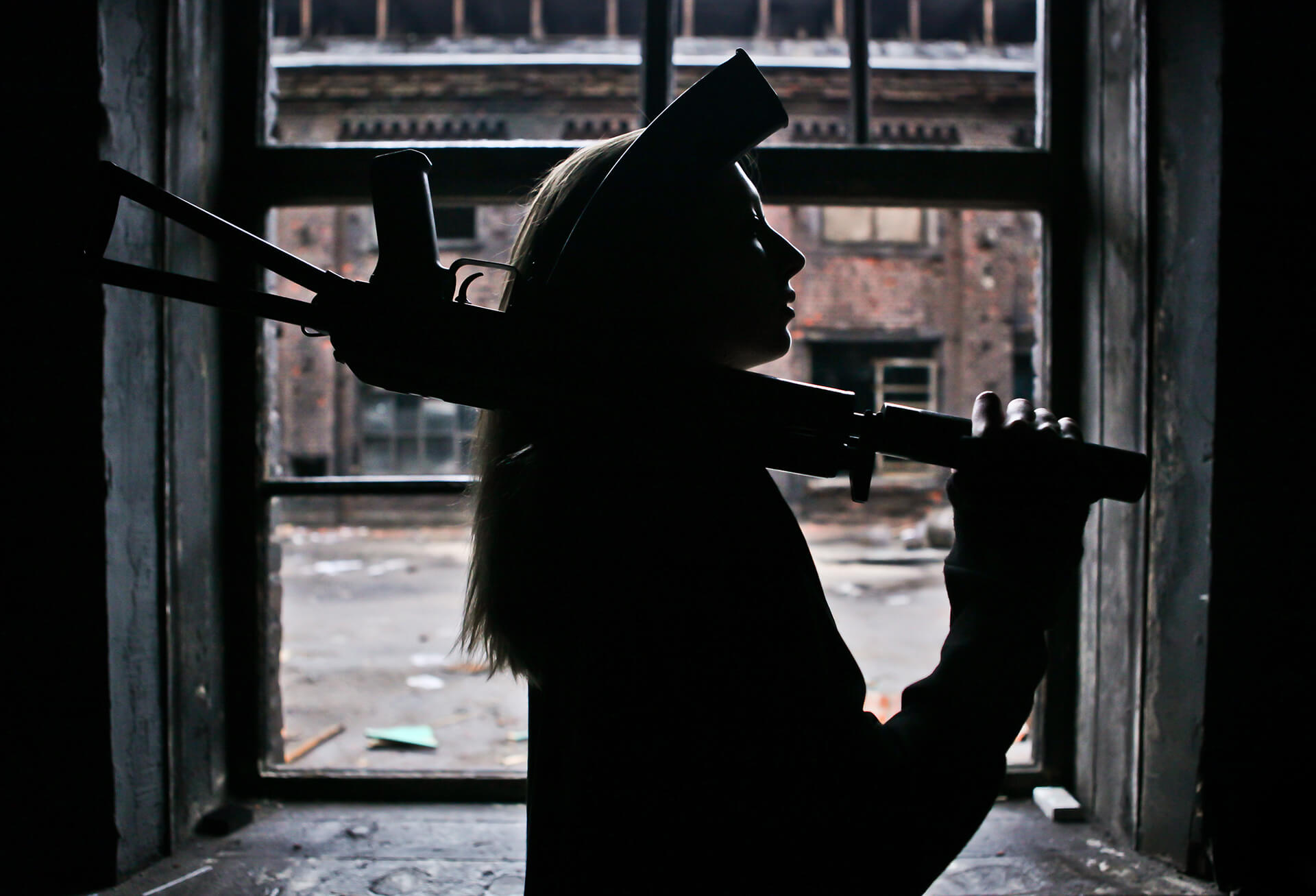 Young armed survivalist woman silhouette with ak rifle on her shoulder with apocalyptic war area around her © Winston Springwater / shutterstock.com

While Denmark and other countries in Europe are focused on defense policy, there is scant attention being paid to the gendered dimensions of the Ukraine war. Not only are women disproportionately affected as victims of such a war, women also have been increasingly recruited to fight in the war. There is almost a universal aversion across many societies to viewing women as capable of violence due to pervasive gender stereotypes.

From struggles and revolutions for independence during colonization to their role as suicide bombers in terrorism and terrorist groups, women have always participated in conflicts. Women in terrorism captured the attention of the global population from 2015 onwards when they were being recruited by Islamic State of Iraq and Syria (ISIS) in droves. The figure of the female terrorist presents a conundrum. On the one hand, as one who commits acts of violence, she is a perpetrator of human rights violations against her own gender and others. On the other hand, structural human rights violations increase her vulnerability to radicalization. The female terrorist then seems to be caught between these two positions, where both law and politics are struggling to accommodate such a figure within their ambits.

The problem lies in the fact that women typically have been viewed from the paradigm of being victims rather than having political agency. Accounts of men’s violence and terrorism typically are seen as rational and male terrorists are seen as active perpetrators of political violence. In contrast, accounts of women’s participation in terrorism is characterised as emotionally driven. This sets up a false dichotomy that translates to an understanding of agency that is gendered, with women’s violence being seen as exceptional.

Women as Victims, Not Perpetrators of Violence

In international law, the women, peace and security (WPS) agenda mainly focuses on victims of sexual violence during conflicts. UN Security Council Resolution 2242 in WPS has only one paragraph with one sentence that mentions female radicalization: “…to conduct and gather gender-sensitive research and data collection on the drivers of radicalization for women, and the impacts of counter-terrorism strategies on women’s human rights and women’s organizations” (para. 12). This is a fraught area within the WPS Agenda with a confusing wording, where women are presented as both problem and solution in the same sentence. Furthermore, the WPS model falls within heteronormativity—it is heterosexual and heteropatriarchal. The WPS space needs to be recast as something else which does not carry the cultural baggage of gender stereotypes and of these normative frameworks.

Too many have taken a simplistic view of women’s violence as a result of personal failures.  Such a recasting is important because the female terrorist is currently presented without any political agency. The model at present is quite simplistic and reductive, reflecting the way in which women’s violence is generally constructed as resulting from personal failures, lost love and irrational emotionality. Consider the reasons given for women’s radicalization by the report of the European Parliament’s Committee on Women’s Rights and Gender Equality: “a sense of duty to defend their Muslim brothers and sisters”, “a sense of adventure”, “the prospect of marriage” (p. 26). These reasons are repeated in several policy reports and papers that have come out over the last few years on this topic.

The ‘push’ and ‘pull’ factors that are given for women’s violence are that they are frustrated in their personal lives, have unsatisfactory love lives and are looking for an emotional outlet, while the allure of militancy is that it is an adventure, and that they are rebelling against patriarchal injunctions in their own families. Caron E. Gentry and Laura Sjoberg state in Beyond Mothers, Monsters and Whores that how violent women matter in global politics is typically through “the mother, monster and whore narratives which confine them to vengeance, insanity and sexuality and deny the possibility that they could be choosing their actions” (p.20).

The female terrorist is then always presented as someone’s wife, partner, mother, daughter, sister. And we keep coming back to the tropes of the public/private when the female terrorist is characterized as such, where the public sphere is seen to be the rational male space, and the private sphere the ‘irrational’ and ‘emotional’ space. Narratives of women and violence then become sensational and stylized, where their private love and sex lives, lack of ideal femininity as well as lack of political agency become construed as the drivers of terrorism and militancy.

This is not to say that all policy reports do this. The UN Security Council Counter-Terrorism Committee Executive Directorate’s report “Gender Dimensions of the Response to Returning Foreign Terrorist Fighters” acknowledges the need to take a different approach. However, this report is one among the few while a majority of the policy reports thus far rehash the stereotypes.

News reports and coverage of such women popularized the term ‘jihadi bride’ with regards to women joining ISIS, and several scholars have commented on how problematic this terminology is. The connotation of “jihadi bride” is that these women are infantilized as brides and tabloid sensationalism flattens a complicated but necessary debate about political agency.

The flip side to this, however, is that when talking about such women, especially in the context of foreign terrorist fighters where some left to fight in ISIS as young as 15-year-olds, where does one draw the line between vulnerability and agency?  We need to be sensitive to the coercion and violence many female members experience themselves.

At the heart of it all is the inability of the broader cultural imagination to conceive that women are capable of being attracted to violence for reasons that are their own. The gendered narratives of women’s violence ultimately leads to women’s invisibility in legal and political narratives of terrorism, where ultimately women then can only be seen  as victims. Any deviation from this is seen as going down a depraved path about what it means to be a woman. This appears to cancel the possibility that women may not always behave in ways that we as a society expect them to, thus giving rise to sensationalized narratives and framing their violence as exceptional.

[The author is a Public Voices Fellow on Advancing the Rights of Women and Girls with The OpEd Project who helped publish this article.]