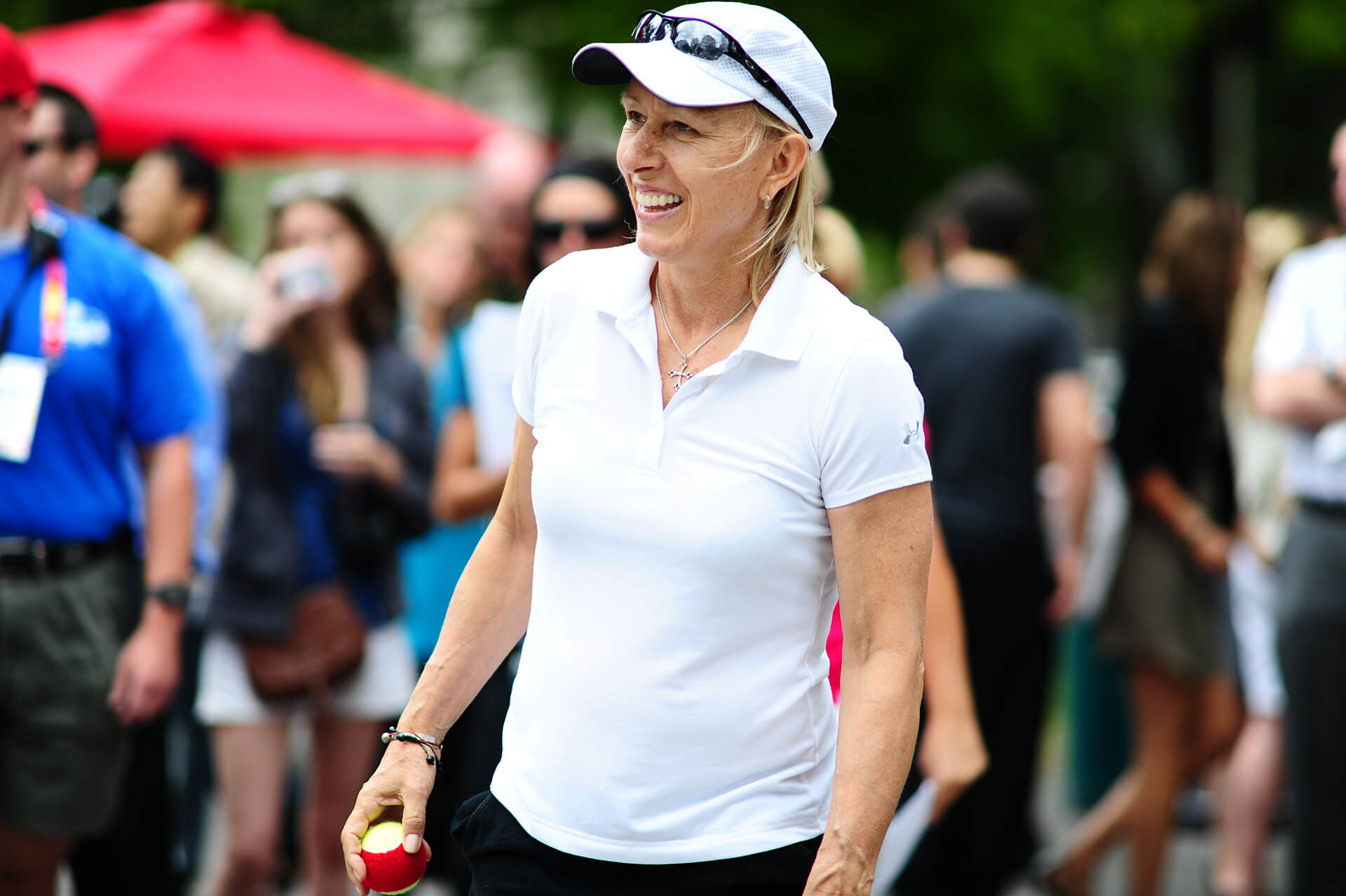 “Last year Martina Navratilova, the tennis pro, denied reports in several British newspapers that she and Rita Mae Brown, the homosexual-activist author with whom she shares a house in Charlottesville, Virginia, had been married at a ceremony in California.”

This was published on May 12, 1981. Neil Amdur, writing for The New York Times, reminded readers, “Homosexuality is the most sensitive issue in the sports marketplace, more delicate than drugs, more controversial than violence.” Amdur’s story was headlined “Homosexuality Sets Off Tremors” and drew on the advice of Bruce Ogilvie (1920–2003), a professor emeritus of psychology at San Jose State University: “He advocated anonymity for homosexual athletes,” wrote Amdur.

Around the same time, Navratilova’s purported housemate Rita Mae Brown was described by The Washington Post’s Stephanie Mansfield as a “dark-eyed beauty, feisty feminist, lesbian activist.” Mansfield wrote of her relationship with Navratilova: “Their private love affair suddenly became public property in the afterglow of notoriety prompted by Billie Jean King’s candid statements on her own love affair.” She quoted Navratilova: “My personal life is nobody’s business.” How wrong she was.

For over four decades, Navratilova’s personal life has been everybody’s business — and she doesn’t appear to have minded. In the early 1980s, Navratilova was unequivocal about her sexuality,  though, as her statement suggests, had no understanding of how she would become an unapologetic, often combative, living symbol of gay rights in sport. She may not have wished for the symbolic role, but she matured into it, so that, by the time she retired in 1994, she was much, much more than an athlete — a great athlete, I should emphasize —  she was an avant-courier, a figure who runs ahead of all others.

Popular With Sports Writers If Not Fans

A few days ago, Navratilova announced that she has been diagnosed with breast and throat cancer. Mercifully, both cancers have been detected in their early stages and the prognosis is favorable. “This double whammy is serious but still fixable, and I’m hoping for a favorable outcome,” Navratilova  said. “It’s going to stink for a while but I will fight with all I have got.” The statement typifies her approach to every difficult, unpleasant or challenging situation she has faced. And I’m not referring to just tennis or health scares.

In 1981, Mansfield described Navratilova as “a popular athlete with the sports writers if not the fans,” her implication being that her relationship with Rita Mae Brown had alienated her from crowds. Czech-born Navratilova defected to the USA in 1975. By 1981, she was one of the leading female players in the world and, at 24, poised to dominate her era as comprehensively as Roger Federer and Serena Williams were to in later eras. She’d never made a secret of her relationship with Brown, whom she met in 1979, though it was her friend and fellow tennis champion Billie Jean King’s scandal that precipitated interest in her personal affairs.

When King’s former hairdresser and secretary Marilyn Barnett took legal action against her to ascertain property rights, King initially denied that she had an intimate relationship with Barnett. Later she acknowledged it, becoming the first female sports star to declare her homosexuality, though grudgingly. The case was thrown out after the judge heard that Barnett had threatened to publish letters that King had written to her. Reflecting on her conflict-strewn career, King observed: “My sexuality has been my most difficult struggle.” Despite this and the fact that King was married to a man (she divorced in 1987), King’s sexual proclivities had become a matter of public record and several of her sponsors dissociated themselves from her.

Interest quickly moved from King to her friend Navratilova who, as the above-quoted story of The New York Times story indicates, volunteered information on her sexuality without inhibition, though on the innocent assumption it wouldn’t expose her to public scrutiny.  So, Navratilova’s decision prompted many questions, the main one being “What now?” The answer was that she became the butt of weak jokes, lost out on some advertising contracts, failed to follow the likes of Anna Kournikova to celebritydom, but reigned imperiously over women’s tennis.

Coming Out: Then and Now

In the 1970s and 1980s, Navratilova won 59 Grand Slam titles: 18 singles, 31 women’s doubles and 10 mixed doubles. King retired from tennis in 1985, leaving Navratilova by far the most prominent openly gay person, certainly in sport and probably beyond.  Remember, this was a time when Freddie Mercury declined to speak openly on his sexuality (and didn’t do so until days before his death in 1991).

In 1984, at the height of the AIDS pandemic, Elton John married Renate Blauel, a woman. They divorced in 1988. In 1992, k.d. lang’s “Constant Craving” was released. The same year, Whitney Houston married Bobbie Brown —  a liaison that served to overshadow Houston’s friendship with Robyn Crawford. The arrest of George Michael for engaging in a “lewd act” in a Beverly Hills restroom in 1998, was a global game changer in too many respects to list here. The mutually reinforcing panic and homophobia incubated during the AIDS pandemic was curtailed by the discovery in 1996 of antiretroviral therapy. Being an out gay athlete then was a completely different experience to how it is now.

Navratilova  aligned herself with LGBTQ+ causes and became an effective and often provocative advocate for gay rights at a time when this was not the acceptable, morally justifiable, and even voguish undertaking it is in these times of gender fluidity. Her very presence among sports’ elite made her a powerful advocate for all women’s rights.

Again, a reminder is needed: women had been hampered in sport by a myth of frailty for the early part of the twentieth century. They weren’t even permitted to compete in an Olympic marathon until 1985. Association football, or soccer, is the most popular sport for women in the world, but the first FIFA World Cup for women took place as recently as 1991. Women’s boxing wasn’t allowed in most parts of the world until the 1980s and even then it took a major court case in 1993 to allow female boxing to develop. It was accepted as an Olympic sport in 2012.

Unlike many LGBTQI+ activists who supported transgender athletes and defended their right to compete in events that best-suited their present gender, as opposed to the gender they were assigned at birth, Navratilova opposed this. Many feminists agreed with Navratilova when she maintained that to allow transgender women athletes to compete with cisgender women “is surely unfair on women who have to compete against people who, biologically, are still men.” The stance earned her the sobriquet “transphobe” and it was in this context that I met her for a BBC documentary.

I’ve written for Fair Observer on the vexed issue of transgender athletes and my position remains: I believe some form of integration must be found. Navratilova believes this will disadvantage athletes whose natal sex is female. It’s a perfectly plausible argument, one I understand, though one with which I don’t concur. Navratilova’s position on transgender athletes has driven a wedge between her and several LGBTQI+ groups, particularly those that lobby for inclusion. In 2019, she was removed as an ambassador by Athlete Ally.

This isn’t likely to diminish her stature nor her place in history — not just sports history. There have been several out gay female athletes in tennis and other sports since she rose to distinction in the 1980s. There have also been some male athletes. None of them can escape the influence of Navratilova and, in the 21st century, who would want to? Hers may be the most significant influence of any athlete and it will endure over the generations.

[Ellis Cashmore’s latest book is The Destruction and Creation of Michael Jackson.]