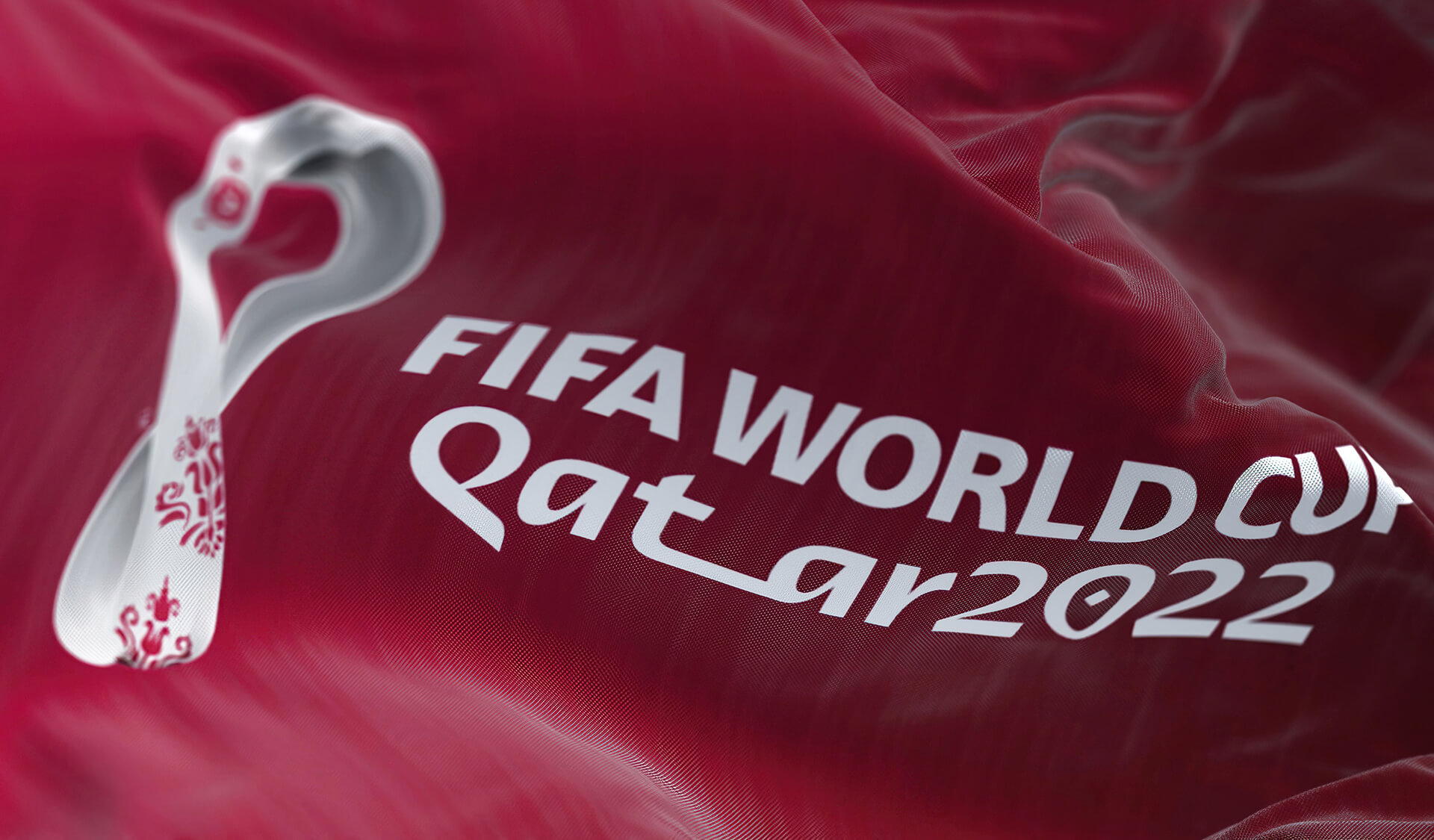 Doha, Qatar, April 2022: A flag with the Qatar 2022 Fifa World Cup logo flapping in the wind. The event is scheduled in Qatar from 21 November to 18 December 2022 © rarrarorro / shutterstock.com

Every World Cup in future will be a cauldron of dispute, confrontation and conflict, a long day’s journey into hostility. Instability and strong emotions will turn what purists once regarded as quadrennial celebrations of global harmony into reminders that humanity is intractably divided, culturally, politically and religiously.

For over 90 years, the World Cup has rivaled the summer Olympics for scope, grandeur and athletic excellence. It still does. But, from this point, it will also be an occasion for gathering forces of dissent. Many will despair at the wrangling that’s changed the character of the 2022 tournament in Qatar, while others will be excited by the way sport can force into world focus problems, affairs or just situations that might otherwise be ignored or dismissed as unworthy of international attention.

Twelve years ago, when football’s world governing organization FIFA agreed to let the sheikhdom on the coast of the Persian Gulf with a tiny population of 2,200,000 to host the tournament, the problems posed seemed logistical: weather, accommodation, timing and so on. No one could have known what was coming. The Harvey Weinstein case came to the fore in 2017, and led to the subsequent surge of the MeToo movement. The comparably potent cultural movement of Black Lives Matter that grew after the killing of George Floyd by a police officer in 2020. Gender fluidity and the challenge to the traditional sexual binary. Transgender politics, not only in sport but in every area of society. These were among the cultural shifts that changed … well, practically everything in society, including perceptions and expectations of sport.

The Greatest Show on Earth

The days when sports governors tried strenuously to prevent political or social issues fouling the onetime pursuit of amateur gentlemen are now gone. Sport is now fully weaponized and the majority of its fans not only accept but insist that it should be used as an instrument for exposing injustices and promoting causes (I have soon-to-be-published research that provides evidence of the rise of politicized fans).

Sports has a mixed record in promoting social change. While it’s hailed as partly responsible for bringing down South African apartheid, there is no persuasive evidence that boycotting South African sport was effective in any more than a symbolic way. The memorable black power salutes at the Mexico Olympics of 1968 are now iconic reminders of the fight against racism in the USA, though many neglect how athletes Tommie Smith and John Carlos, who gestured with their gloved fists, were actually punished and demonized at the time rather than vaunted. Muhammad Ali is often regarded as champion of civil rights as much as a boxer, though, in 1964, when he dropped his name Cassius Clay and converted to the Nation of Islam he was attacked for his separatist philosophy.

Criticism of Qatar or Islam?

Some believe revealing Qatar’s exploitative treatment of migrant workers and its admonition of homosexuality will hasten a change in both. In the first instance, this is possible. In the second, unimaginable. Islam decrees that homosexuality is sinful. No Islamic country on earth, nor any Muslim, whether in the middle east, Britain, USA or anywhere else will demur. Qatar is among at least eleven other countries that consider homosexuality a capital offense, which may be punishable by death.

At this point, I should perhaps declare an interest: I am a white, cisgender heterosexual male, born in the UK, part-educated in Canada, having lived in Asia and the USA. In common with other sociologists, I understand the deep cultural significance of religion, but believe in the primacy of humanity, making me atheist. I am also reflexive, meaning that I don’t accept there is a neutral position from which to assess cultures: the very fact of my existence implicates me in culture and precludes objective analysis. I remain aware that I am steeped in the culture of my upbringing and mature development. So, while I’ve supported gay rights and opposed racism for my adult life and argue against others who do not, I try to resist privileging my own culture over all others. I include this detail because my interpretation of much of the recent condemnation of Qatar is that it is a disguised attack on Islam.

Close to a quarter of the world’s human population are Muslims. I find the Islamic code on homosexuality repugnant. I also acknowledge that its source is in faith and no amount of argument will change this. So, when Qatar is described by western journalists as “medieval,” it discloses a sneering, ignorant disrespect. And, when I hear western Europeans, who are not Muslims, describing their commitment to “cultural inclusiveness” or “inclusivity,” I suspect they mean excluding any party that disagrees with popular western principles, standards and values.

Intolerance is an old-fashioned word so maybe neo-intolerance is how we should describe the new form of western cultural pompousness. The affectedly — and usually self-congratulatory — manner with which west European liberals make pronouncements on practically anything that deviates from their own rules of thought and conduct is sure to be challenged. Possibly by the time of the next World Cup.

Politics and the 2026 World Cup

The 2026 World Cup will be shared by three hosts all from the same land mass and all predominantly Christian: Canada, USA and Mexico. Not all countries are equally worthy of opprobrium, of course. The USA will bear the heaviest burden, with laws on the possession of firearms framed in the nineteenth century (far from medieval) and laws on abortion that were reformed in 1973, but which may by the time of the World Cup, be retroceded to the 1820s. Mexico decriminalized abortion only last year. As for Canada, that perennially inoffensive territory in the north, consider: last year, Pope Francis publicly apologized for the 150,000 indigenous children who were separated from their families and taken to residential Catholic schools where they were beaten, starved and sexually abused, between 1881-1996. This will be one of a number of concerns regarding indigenous people that will surface when the World Cup arrives.

Once more, there will be sanctimonious critics offering their insight, resonance and misplaced sense of superiority. There will also be earnest interrogation that will lead to useful and possibly productive developments. Qatar is not going to abandon Islam, but its citizens live on planet earth, eat, work, catch buses and do many of the same things as the rest of the world. That includes examining their lives from time to time — as we all do. They have been made forcibly and, I am guessing, uncomfortably aware of what many others regard as their shortcomings and may choose to revise them accordingly in future.

What is football for?

Football is ridiculous, isn’t it? Eleven grown men kicking a ball in one direction while another eleven grown men try to stop them and move the ball the other way. Can you think of anything more trivial and purposeless? The attention granted the World Cup might lead a friendly alien to assume the tournament takes us closer to world peace, or finding a cure for cancer, or maybe saving the planet from self-destruction. It does none of these things. But this sporting wasteland may yet produce some good: if, as I expect, World Cups from this point become cultural tinderboxes, then they might cease to be trivial and conjure larger, more meaningful campaigns that will bring genuine benefits.

Those who wish football and other sports to ablute themselves of politics will rue the day FIFA awarded the 2022 World Cup to what was once a British protectorate where they speak Arabic and which got rich through its oil. But the sustained fury the decision has engendered may yet be the greatest blessing, not to football, but to the world.

Ellis Cashmore’s latest book is “The Destruction and Creation of Michael Jackson.”