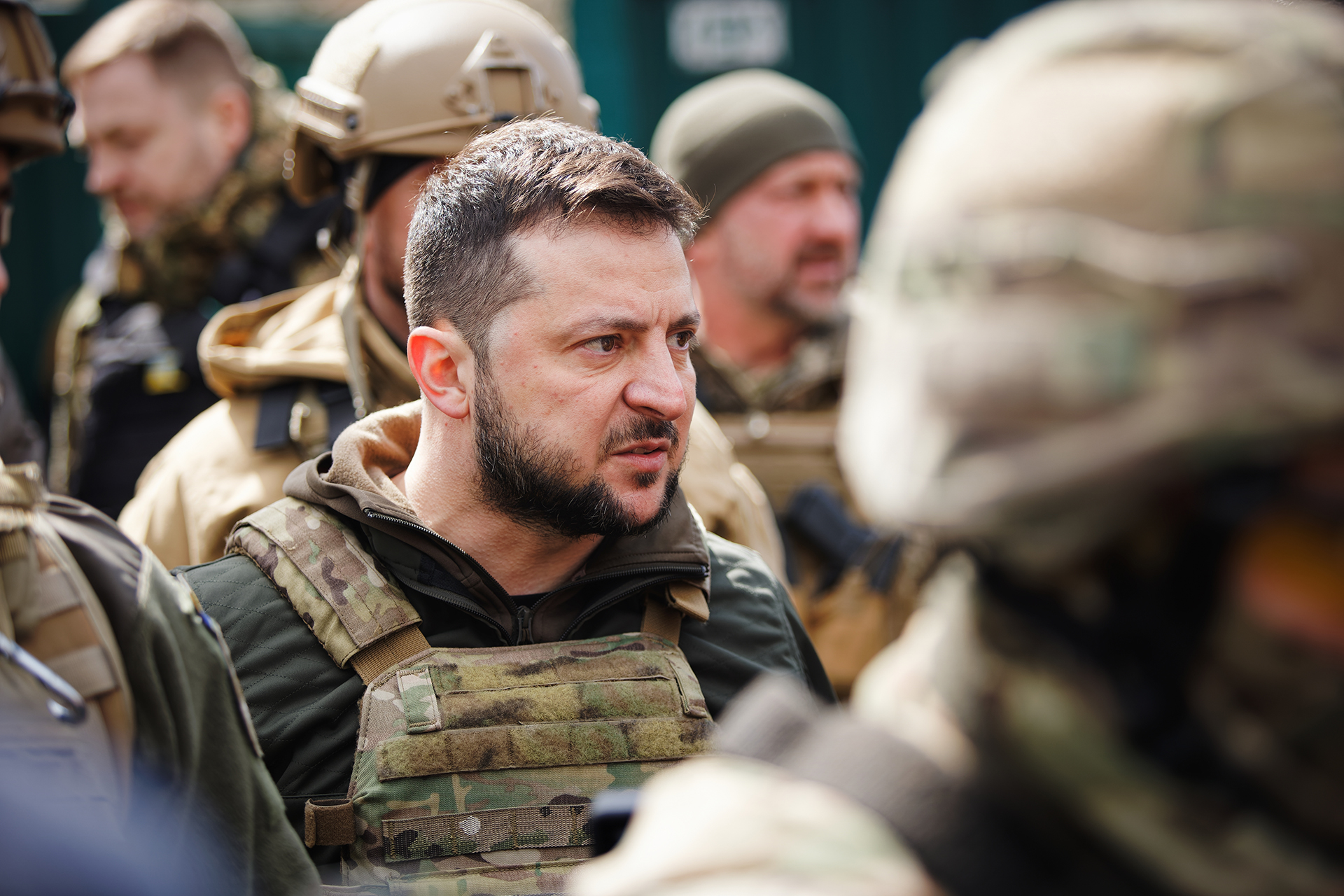 Vladimir Putin is playing the long game. The Russian leader believes that he can outwait all of his adversaries. Since he has ruled over Russia for more than two decades, he obviously has sound political instincts (as well as a well-deserved reputation for ruthlessness). He is gambling that the Ukrainians, the Europeans, and the Americans will all eventually give up and let Russia consolidate its territorial gains if not complete control over Ukraine.

The Ukrainian leadership, on the other hand, believes that it can, with the help of US and European military equipment, expel Russian troops not only from the territory seized since the February invasion but even the lands in the Donbas region and the Crimean Peninsula that Russia occupied in 2014.

These completely incompatible objectives are surely a recipe for a long stalemate. Perhaps the conflict in Ukraine will come to resemble the Korean War, which featured dramatic battleground reversals in the first year followed by two years of stalemate before the warring parties, exhausted and chastened, finally negotiated an armistice.

The Korean War is relevant for another reason. Like Kim Il Sung, Putin counted on Chinese support. During the Korean War, North Korea was saved by the intervention of the Chinese army. This time around, however, China is not sending any military hardware, much less any troops, to help Russia.

Putin might also be wrong about his assumptions about the weakness of his adversaries.

The current Russian strategy has been to hold off Ukrainian military advances around Kharkiv in the north and Kherson in the south while bombing the country’s infrastructure. The massive campaign of aerial destruction has already damaged 40% of Ukraine’s energy infrastructure, including a large portion of its solar and wind power installations, as well as water and sewage facilities.

Although this new aerial campaign has brought the war once again to major population centers like the capital Kyiv—and even to areas in the far west along the Polish border—it seems to have only strengthened the resolve of Ukrainians to fight back. According to a poll from the end of October, 86% of Ukrainian respondents believe that it’s necessary to keep fighting despite the devastating air strikes. Meanwhile, according to Russian polls, support for the war has fallen to new lows.

Is Ukraine Going too Far in its War?

On the ground, Russian forces recently abandoned Kherson, the only major Ukrainian city that the invading armies managed to seize. Even ardent Putin supporters are aghast at this latest sign of Russian military failure. It was only a few weeks ago that the Russian government declared Kherson part of the Russian Federation when it annexed four Ukrainian territories. Former Putin advisor Sergei Markov called “the surrender of Kherson… the largest geopolitical defeat of Russia since the collapse of the USSR.”

Putin has also expected that political unity in the United States would eventually fragment in the face of rising energy and food prices. The Republican Party in Congress has indeed indicated that this unity is fleeting. House Republican Leader Kevin McCarthy, in the lead-up to this week’s midterm elections, warned that his party was “not going to write a blank check to Ukraine.”

In reality, McCarthy only meant that he favored greater oversight of the funds, not a reduction in support. Only a few Republican legislators oppose military aid to Ukraine. In the midterms, Republicans failed to take the Senate and managed only a slim margin of victory in the House. Even if they wanted to, the Republicans are not likely to be able to change US policy on Ukraine.

Nor will the left wing of the Democratic Party significantly change administration policy. Despite all the hoopla around the Congressional Progressive Caucus’s letter on Ukraine that was unveiled and withdrawn in quick succession, most progressives support the provision of aid. Here, for instance, is a recent statement from Congressman Jamie Raskin, a prominent Congressional Progressive Caucus member and one of the letter’s signatories:

Ukrainians today give the democratic world a chance for a critical and historic victory, and we must rally to their side. It is important to be on the right side of a just war, and it is even more important to be on the right side and win. Just as Ukrainian resistance gives us hope, a Ukrainian victory would give us an opening to a much better future for all humanity. All champions of democracy over autocracy—whether they call themselves progressives, conservatives or liberals—should be doing whatever we can to ensure that Ukraine wins this just war as quickly as possible.

In the public at large, meanwhile, US military support of Ukraine enjoys strong support. Around three out of four Americans support the continuation of both economic and military aid to Ukraine.

Putin has also expected European support for Ukraine to crumble in the face of a winter of rising energy costs. Here, there is a considerably wider range of opinion than in the United States. A plurality of both Greeks and Italians favor lifting sanctions against Russia. Hungarians, too, are skeptical about a tougher approach to Russia. By contrast, the rest of Europe is not in the mood to compromise with the Kremlin.

Although Putin might be cheered by the growing gap between Greece, Italy, and Hungary on the one hand and the rest of Europe on the other, he should be very worried about plummeting support for Russia among what had once been his most reliable allies: far-right political parties.

In Italy, for instance, Putin once enjoyed considerable influence with the far right. He counted Silvio Berlusconi, former prime minister and head of Forza Italia, as a close friend. Putin’s United Russia party had a close partnership with Matteo Salvini’s Lega party. Under ordinary circumstances, Putin should have been thrilled by the victory of the far right in the recent Italian elections.

But the head of the leading far-right party Brothers of Italy, Prime Minister Georgia Meloni, has made it clear that she will continue to support Ukraine. “Given our principal challenge today, Italy strongly supports the territorial integrity, sovereignty and freedom of Ukraine,” Meloni told NATO at a meeting last week. “The political cohesion of the alliance and our full commitment to supporting the Ukrainian cause are, from our point of view, the best response that NATO allies can give.”

Putin himself was once held in high regard by the European far right. Since the invasion of Ukraine, his approval ratings among voters affiliated with far-right parties has dropped dramatically. For instance, 62% of Lega voters in Italy once thought highly of Putin. That number has dropped to 10% today.

If you add up all these factors, Ukraine has a considerable edge over Russia. It is maintaining its military support from the United States and the European Union, and recent elections in Italy and the United States have not altered those commitments. It is making incremental progress on the battlefield, as the Russian withdrawal from Kherson indicates. And Russian destruction of civil infrastructure, however extensive and punishing, has not sapped the will of the Ukrainian population.

Russia, on the other hand, faces numerous problems. It has few supporters in the international arena. It is having difficulty calling up enough experienced soldiers to replenish the front lines in Ukraine. And sanctions are reducing its ability to replace the military hardware it has lost so far in the war, as its overtures to Iran and North Korea for rather rudimentary arms indicate.

Given Ukraine’s battlefield successes and the willingness of the Ukrainian population to endure hardship in order to repel Russian invaders, this is no time to call for a ceasefire. Such a ceasefire would give Russia the time to reinforce its positions in occupied territory in Ukraine and train new recruits to prepare for a future counter-offensive. If Ukrainians change their minds and champion a ceasefire, then of course the United States should help negotiate one. But not until then.

It is absurd to demand that an occupied country stop fighting for its liberation and essentially give up its land for peace. It’s the same as telling a victim of violence to not resist a person who tries to abuse, rape or murder them. Why would we tell that to Ukrainians?

Nine times out of ten, war is not the answer. But in this case, the Ukrainians didn’t ask for war. It was thrust upon them. So, the only appropriate answer to Russia’s invasion is a war of self-defense. And right now, Ukraine is winning it.

Down the road, a stalemate is possible, perhaps even likely. At the moment, however, the government of Volodymyr Zelensky sees no need to negotiate with a Kremlin that is equally uninterested in compromise. The difference for the Ukrainians, however, is that they have good reason to believe that they can achieve their goals of regaining occupied territory by military means in the coming months.

[This article was originally published by FPIF.]