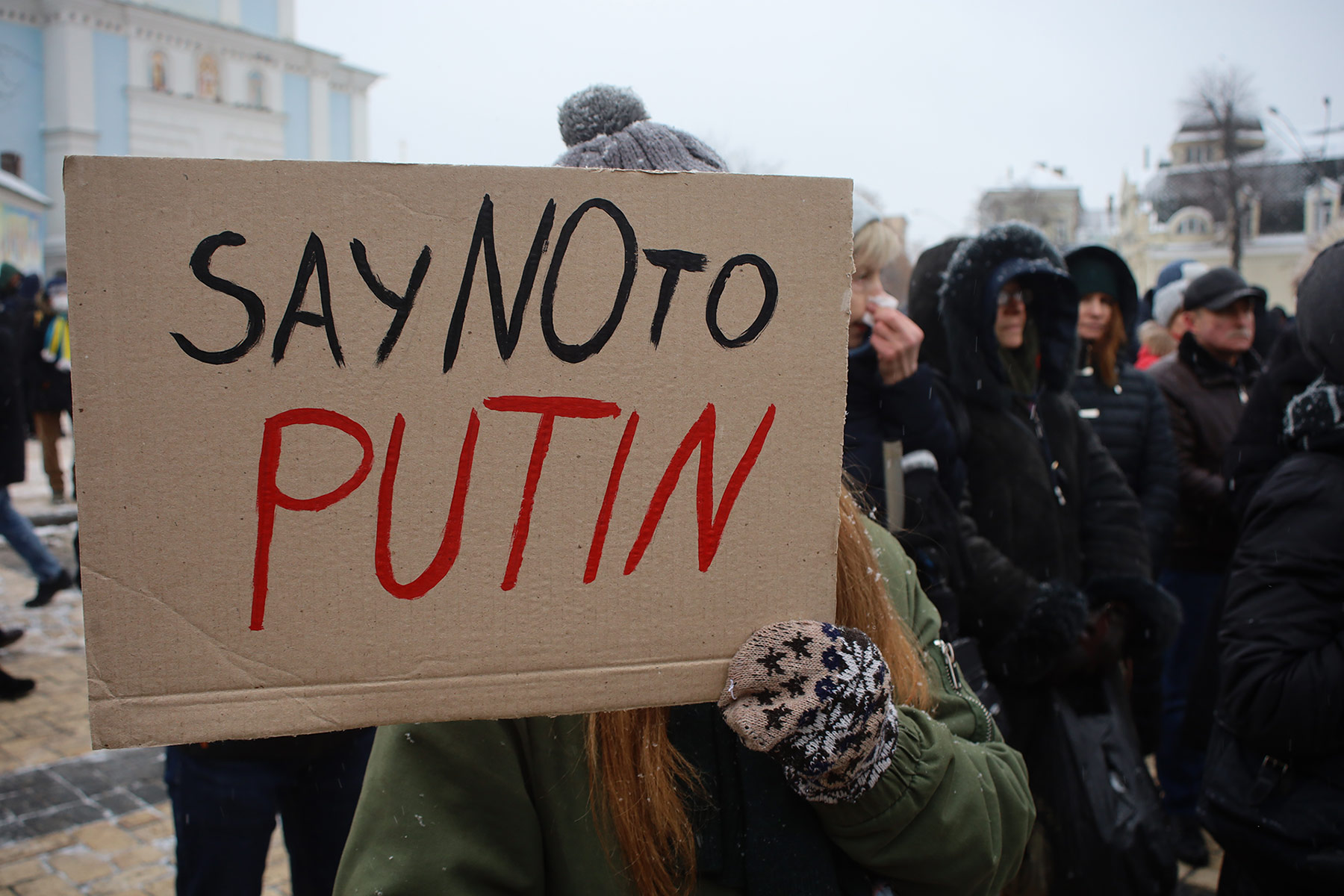 “Everything has already been said, but not yet by everybody.” This quote by the Bavarian comedian Karl Valentin applies also to the ongoing Russian threat to Ukraine, which has brought a new level of tension to Europe. Yet it provides no comic relief as the situation is far too dangerous for everyone, but especially for the people of Ukraine who have been widely excluded from the ongoing discussions about their future.

The diplomatic failures of the Russian and American negotiators and the steady escalation in rhetoric indicate an unwillingness to compromise on both sides. Russia wants guarantees that neither Ukraine nor Georgia will accede to NATO, which NATO categorically refuses to do. But Russia’s excessive list of demands shows that it doesn’t expect the West to agree. It would, conversely, mean that Russia would have to remove its own missiles from the Kaliningrad Oblast that borders Poland and Lithuania.

The failure of the Russian Federation to respect the sovereign will of its neighboring states demonstrates well its 19th-century view of geopolitics that if it doesn’t belong to us now, it will soon belong to our enemies. By raising the stakes, Russia has shown that there are now only three options for Ukraine — siding with Russia, aligning with the West, or permanent neutrality — and it is testing to see just how much the West really wants Ukraine. But time is running out. Maintaining a large standing army on such a long border requires significant resources. They’ll have to be moved eventually. The question is, in which direction?

Like pieces on a chessboard, Ukraine acceding to NATO would, from the alliance’s perspective, be like the West gaining a pawn. From the view of the Kremlin, however, Russia would be losing its queen. The movement of NATO’s eastern flank into Ukraine would increase the length of the NATO-Russian land border nearly fourfold, from 703 kilometers to 2,677 kilometers — an unpleasant prospect for security-obsessed Moscow.

As such, we believe that there are several scenarios regarding how the situation could develop, with a multitude of compounding factors. Three of them have been described here, which we still believe could prove most likely.

While it is impossible to know what will actually happen, one thing seems to be perfectly clear: There is no peaceful solution for Ukraine. Regardless of what outcome the negotiations have, Crimea is still occupied and the war in Donbas is ongoing. The Kremlin wants security guarantees, but so does Ukraine. Kyiv sees its best option in NATO membership, which is mutually exclusive to Moscow’s objective.

It’s at this point that the debate about Ukrainian neutrality gains momentum. Such a declaration of neutrality could also be welcome in Western capitals. Although this currently disregards the stated sovereign will of those Ukrainians who support a Western path, one could nonetheless imagine a tripartite (NATO/US–Ukraine–Russian Federation) treaty on Ukrainian neutrality would ease security fears, while also not excluding the prospect of future EU membership for the country, like neutral Austria, Sweden and Finland. Indeed, the stability provided by a neutrality treaty would afford Ukraine the necessary conditions for significant economic growth and democratization.

Nevertheless, the Kremlin’s security concerns regarding NATO are, to our understanding, not the dominant factor in this situation. Apart from the fact that there is also a sort of collective security provision in Article 42 (7) of the Treaty of the European Union, the main concern for the Russian regime is a democratic and prosperous Ukraine. Because if a “brotherly” nation, as Putin has referred to it on numerous occasions, could thrive in a climate of social freedom, the Russian population could demand this as well, which would ultimately lead to the collapse of the current administration.

Neutrality, moreover, doesn’t also necessarily prevent a Russian military presence. In Moldova — a neutral country — around 2,000 Russian soldiers are present, 500 of them as “peacekeepers,” following the war in Transnistria in 1992. Andreas Umland, an analyst at the Stockholm Centre for Eastern European Studies, the Swedish Institute of International Affairs, asked (during a conference both authors attended) whether these and other Russian troops stationed in the former Soviet republics should not rather be referred to as “piece keepers” — pun intended.

Umland is also the initiator of an open letter to the German government signed by 73 German experts on Eastern Europe and international security, among them one of the authors of this article. The aim here is to call for a German reaction to the threat the Russian Federation poses to the European security order.

The new German government hasn’t changed its predecessor’s position regarding the Nord Stream 2 pipeline, which would provide leverage in the negotiations but is constantly depoliticized by officials. Moreover, drastic sanctions, like excluding Russia from the SWIFT global payment system or even delivering defensive weapons to Ukraine, have been ruled out. The latter is based on what Berlin perceives as its historic responsibility toward Russia for Germany’s role in the Second World War, ironically ignoring that this should also include Ukraine as both were part of the Soviet Union.

But a time is coming when Berlin must weigh up whether it is willing to stand in solidarity with its allies, Ukraine and the principles of international law and self-determination, or if its responsibilities for the past mean it would rather stay in the Kremlin’s good books. In any case, this German factor has long provided the Kremlin with the opportunity to pursue its divide-and-conquer strategy in the European Union.

Perhaps the greatest leverage the EU would have over Russia (and currently vice versa) is the control over the supply of natural gas. Moscow has for far too long fostered Europe’s reliance on Russian natural resources. Dependence works both ways, and if the EU, and especially Germany, were to take control and shut off Russian pipelines into Europe, the consequences would be far worse for Russia.

Painful though it may be at first, it is entirely possible, and such a preemptive tactic — showing Russia that the EU is no longer dependent on its supplies — would have a powerful taming effect on Moscow. It would also spur on the increased diversification of European energy supplies, costing Europe less in the long run. This energy card is currently in German hands.

Negotiations aside, one of the most striking things about this current escalation has been the sidelining of Ukraine’s position. If we’ve learned anything from history, it is that smaller countries should not be overlooked as their voices are silenced. We’ve seen this situation before: excessive demands, promises of being satisfied if conditions are met, protecting citizens, peaceful intentions but ready for war. All this sounds too familiar. Yet again, the wishes of the main country involved — in this case, Ukraine — are not being respected.

We should not repeat the same mistakes from 100, 80 or even just eight years ago. Ukraine has made its move, and so has Russia. It is now up to the West to come together and show Russia that aggression no longer pays.

There is so much more at stake here than just peace in Europe. We need to understand that this is a direct attack on Europe’s collective achievements over the past decades. Ukrainians contributed to these achievements with the Maidan Revolution in 2014. The EU failed them then, so we must not fail Ukraine again. Otherwise, the hopes for democratic development in the east of the European continent will just be a piece of history, never to return.

*[Fair Observer is a media partner of Institute for the Danube Region and Central Europe.]